The prices of petrol and diesel continued their upward trend for 20th day in a row. On Friday, the petrol was retailing at Rs 80.13 a litre in Delhi and diesel price was Rs 80.19 a litre. 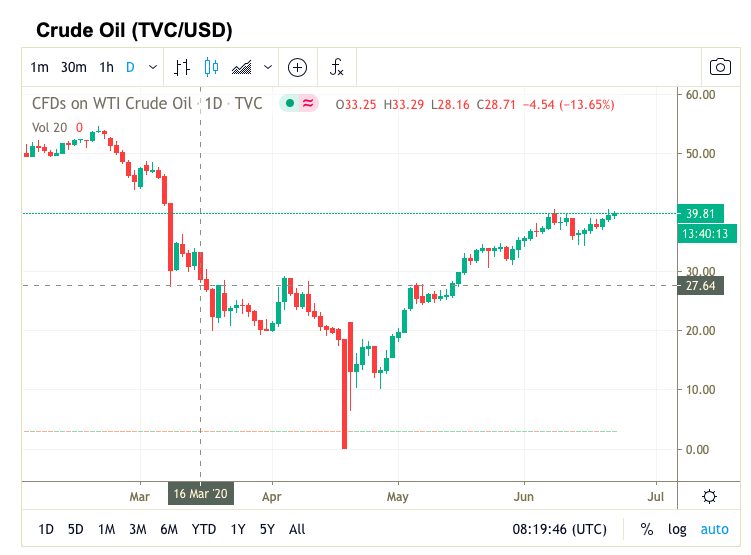 But today Crude crude oil prices at about $40 but currently petrol is being sold at ₹ 80.13 per litre and diesel at ₹80.19 per litre
Petroleum Consumption statistics put forth Between financial year 2014-15 to 2019-20, the BJP party led Modi government has hiked taxes on petrol and diesel 12 times and has collected a whopping Rs 17,80,056 crore in just the last six years.
The freeze in rates was imposed in mid-March soon after the government hiked excise duty on petrol and diesel to shore up additional finances.
Oil PSUs Indian Oil Corp (IOC), Bharat Petroleum Corp Ltd (BPCL) and Hindustan Petroleum Corp Ltd (HPCL), instead of passing on the excise duty hikes to customers, adjusted them against the fall in the retail rates that was warranted because of a decline in international oil prices.
The Opposition has been relentlessly attacking the government over the fuel price hike.
Congress leader Priyanka Gandhi said on Thursday that it has become clear that the Centre is only interested in picking pockets of the people even in times of crisis.
The Congress will hold mass protests across the country on Monday over the “unprecedented” rise in petrol and diesel prices.
Rashtriya Janata Dal (RJD) leaders Tejashwi Yadav and Tej Pratap Yadav along with party workers held a cycle march protest against rising fuel prices in Patna on Thursday.
Also read : Rs 17,80,056 Crores (237 Billion US$) Modi Govt Via Tax Over Petrol , Diesel Collected

Share via   Delhi court on Saturday extended by four days the CBI custody of Christian Michel, alleged middleman charge-sheeted and arrested in the AgustaWestland VVIP chopper case. The 57-year-old British national was produced before Special Judge Arvind Kumar. The probe agency told the judge that Michel needs to be confronted with various documents in Read More…

Share via Just two days before counting for the 2019 Lok Sabha elections, 22 Opposition parties submitted a memorandum before the Election Commission (EC)on Tuesday, 21 May, requesting that the verification of VVPAT slips of randomly identified (5) polling stations be done before vote counting is initiated, and not after the last round of counting Read More…

Share via The flood situation in Assam further deteriorated on Thursday 23 July) with four more persons losing their lives, taking the toll to 93, even as the number of people affected rose to 28.32 lakh across 26 districts, officials said. People in the state of Assam affected by flood complained both BJP governed state Read More…