Skip to content
The death of two men, Jayaraj and his son Bennicks, in sattankulam south Tamilnadu Nellai district has sparked massive outrage in Tamil Nadu.
The two were picked up for questioning by cops of the Sathankulam police station for allegedly violating lockdown rules.
As new details are made public, questions are being raised over the role the magistrate in the deaths with people taking to social media to demand probe into custodial deaths and alleged police brutality.
#JusticeForJayarajAndFenix has become a top trend on Twitter, with people not just Tamil Nadu but across nation condemning the alleged police brutality and demanding justice for the two P Jayaraj and his son J Bennicks who is mistakenly being referred to as Fenix.
Principle Opposition  party leader M.K.Stalin  in Tamilnadu has said he had sleepless nights and offered DMK party fund 25 Lakhs to the family of victims and assured his party legal assistance for helping the family to get justice through courts
[splco_spacer] 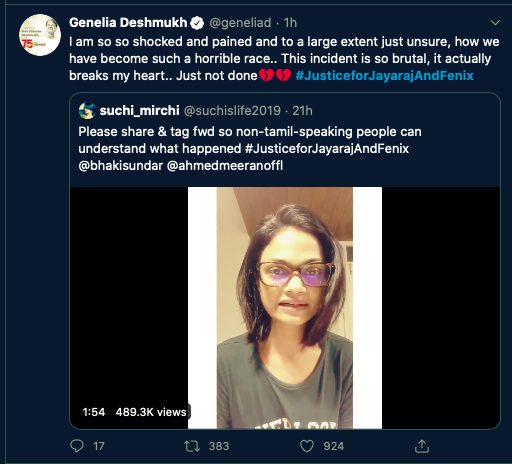 [splco_spacer]
Main Opposition leader Congress party MP Rahul Gandhi expressed his shock and tweeted ” “Police brutality is a terrible crime. It’s a tragedy when our protectors turn into oppressors. I offer my condolences to the family of the victims and appeal to the government to ensure justice.”
This ballast violations of law by Police official during the time of corona epidemic shocked the conscious of many Indians
[splco_spacer] 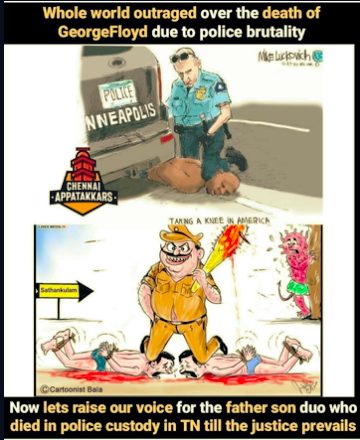 [splco_spacer]
[splco_label type=”important”]Timeline of events[/splco_label]
On June 19, P Jayaraj (59) and his son J Bennicks (31;)  being mistakenly referred to as Fenix) were picked up for questioning by the Tamil Nadu Police in Tuticorin’s Sathankulam for allegedly violating lockdown rules. As per the police, the duo was held for keeping their mobile accessories shop beyond permissible hours on June 19. An FIR was filed against the two on June 19.
The Sathankulam police then approached magistrate B Saravanan for the remand of Jayaraj and Bennicks. The magistrate allegedly gave the remand order without physically seeing the father-son duo, which is required to ascertain if detainees are injured
Other reports say that in the early hours of June 20, Bennicks and Jayaraj were taken to a hospital before they were brought to the magistrate for remand. There, Bennicks and his father reportedly could not tell the truth of their ordeal due to repeated threats from police.
On June 22, Bennicks fell ill and was moved to the Kovilpatti General Hospital where he died. A day later, his father also died. The allegation is that they thrashed and tortured by the police while in custody, leading to their deaths. Leading media reports also suggest that the duo was sexually assaulted in police custody. The post mortem report reveals mutilated private parts of father and son
Quoting eyewitnesses, a Chennai-based news site The Federal said that Jayaraj and his son were allegedly sodomised in police custody. “Between 7 am and 12 pm on June 20, the father and son had changed at least seven lungies (waistcloth) each as they had become wet due to blood oozing from their rectums,” The Federal quoted a friend of Bennick’s as saying. The friend also said the father-son duo came out of prison in a dishevelled state with torn and bloodied clothes. Bennicks’ friend, who was also were present in the police station when the police rounded them up, told the news outlet that for three hours, they heard only screams and cries of Jayaraj and Bennicks.
[splco_spacer] 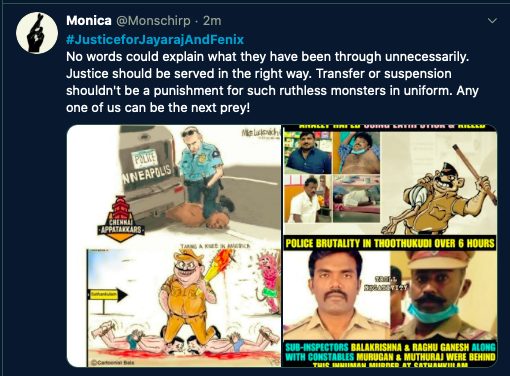 [splco_spacer]
After the details of the case emerged, there was outrage in Tuticorin. Shops in the district remained closed to protest against the alleged police brutality. Over 150 people participated in a protest at the Virugambakkam market. Of these, 50 people were arrested for violating lockdown norms,
The family of Jayaraj and Bennicks have demanded that a murder case be registered against two sub-inspectors, alleging they were responsible for the death of the two. The relatives said they would not accept the bodies till their demand was met, even as the post mortem was held at the Tirunelveli Government Hospital. Various political parties, including the DMK, also demanded action against those responsible for the duo’s death.
Taking note of the matter, the Madras High Court has asked for a report. The Madurai bench of the Madras High Court directed the police to submit a report on July 26 over the death of the duo. Bennicks was bleeding when he was brought to the prison, jail authorities claimed. Tuticorin Collector Sandeep Nanduri said the duo had been earlier arrested and lodged in the Kovilpatti sub-jail. “There were complaints that they were killed in police assault… a judicial probe has been ordered,” Tuticorin Collector Sandeep Nanduri said.
Tamil Nadu ADMK CM K Palaniswami, who said the duo died to health issues received immediate social media condemnations and DMK women wing leader and MP Kanimozhi has questioned how can CM utter such things before post mortem report surface. facing out-clash  made State CM to  retreat and then  assured legal action as per the orders of the Madurai bench of the Madras High Court and action based on the magisterial probe into the custodial death of the father-son duo in Tuticorin.
The Tamil Nadu CM also announced Rs 10 lakh ex gratia to their families and government jobs to a family member of each deceased. The chief minister said the two policemen alleged to be responsible for the deaths had been suspended and the inspector of Sathankulam been kept under compulsory waiting. Family members refused to accept government monies and government jobs but wanted justice
[splco_spacer] 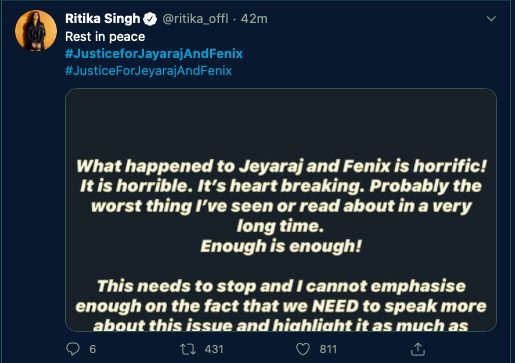 [splco_spacer]
On Twitter, many celebrities also took to the social networking site to demand justice. The instantaneous protest across Tamilnadu  video and his sister demand for justice attached ..
[splco_spacer]

A resolution recommending the release of the seven has been passed over this in the cabinet meeting chaired by chief minister Edappadi K Palaniswami in the state secretariat on Sunday evening, said fisheries minister D Jayakumar. “The cabinet urged governor Purohit to use his powers under article 161 of the constitution to release Murugan, Santhan, Read More…