Swarms of the crop destroying insects entered India on April 11. On Monday, parts of Jaipur were overrun by locusts.

Huge swarms of desert locusts are destroying crops across western and central India, prompting authorities Tuesday to step up their response to the country’s worst plague in nearly three decades.
Drones, tractors and cars have been sent out to track the voracious pests and spray them with pesticides. The locusts have already destroyed nearly 50,000 hectares of cropland.
“Eight to 10 swarms, each measuring around a square kilometre are active in parts of Rajasthan and Madhya Pradesh,” the government’s Locust Warning Organisation’s deputy director KL Gurjar told news agency
[splco_spacer size=”30″] 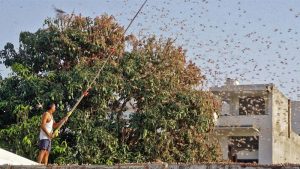 A swarm of 40 million locusts can eat as much food as 35,000 people, or six elephants, according to the United Nation’s Food and Agriculture Organisation.
Scientists at the Indian Meteorological Department (IMD) said that the wind patterns have been unpredictable this year on account of the western disturbances over northern India.
“At present, the winds in Delhi are blowing from Rajasthan side. This means that the locust attack could hit Delhi. (However) from May 28, the wind pattern might change to easterly,” said Kuldeep Srivastava, head of IMD’s regional weather forecasting centre.
[splco_spacer size=”30″] 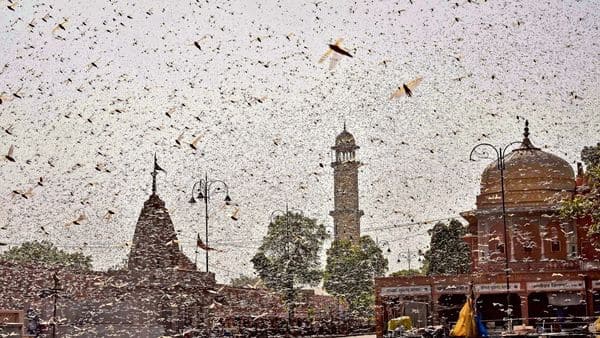 [splco_spacer size=”30″]
“From Jaipur, their current trajectory till Tuesday afternoon was towards Dausa and Karauli districts in Rajasthan.
If the wind pattern further changes towards Delhi then these locust swarms may reach the city,” said K L Gurjar, deputy director, Locust Working Organisation.
Senior Delhi government officials said that they are waiting for the final alert from the meteorological department and they are ready to tackle the problem. 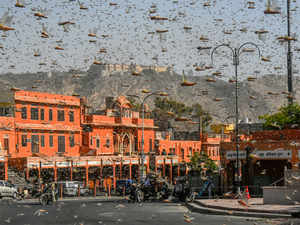 “The preparations demand insecticides to be spread. But it is to be done in the day time after the locusts are seen in an area,” a senior official in the city government’s agriculture department said.
The swarms are capable of covering a distance of 150 km a day and a swarm that covers an area of a square kilometre can eat as much food as 35,000 people in terms of weight.
[splco_spacer size=”30″]

2019 General election witnessed EVM Glitches Reported in Several Areas in Delhi . However Election Commission has got in to a confusing mode when they got bombarded to this specific below issue ..   “My VVPAT machine (Delhi, Matiala, Booth 96) printed the wrong symbol although the EVM machine red bulb glowed correctly. I complained Read More…

At a time Privatisation of airports has been challenged in high courts in Assam and Kerala citing security reasons, scam  and privacy violations on the cards ., The airports in Jaipur, Thiruvanthapuram and Guwahati airports will be leased to private companies for development, operation and maintenance on a public-private partnership (PPP) model for 50 years, Read More…