As news of Covid-19 related deaths continue to send shock waves across the country, people today witnessed horrific visuals at the Mahadev Ghat in Bihar’s Buxar.

In Bihar People were shocked as pictures of bloated bodies at Mahadev Ghat in Bihar’s Buxar district flooded
It is to be noted Bihar state CM Nitish is part of BJP alliance blames for this mishap Uttarpradesh BJP led yogi government.
Bihar administration said the bodies were from Uttar Pradesh. the charge rejected by Uttarpradesh government
The pictures of bodies piled up at the Mahadev Ghat situated near Chausa in Buxar district flooded social media early morning today.
The recovery of the dead bodies in such large numbers has left people shocked.
There seems to be no end to insensitivity towards the dead bodies of Covid-19 patients in india reported locals
The Uttar Pradesh and Bihar governments started blaming each other for the incident after locals raised alarm about the bodies being piled up at the ghat. 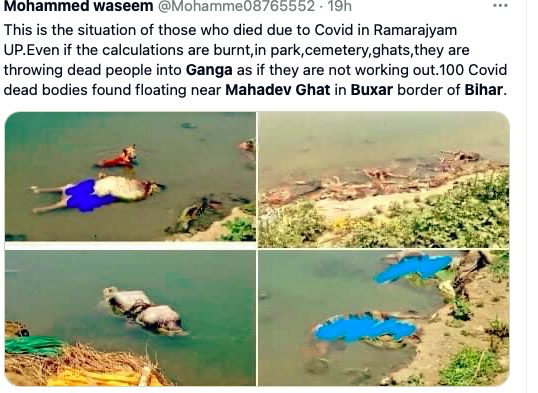 “Some 40-45 bodies were seen floating,” said Chausa district official Ashok Kumar, standing at the site of the horror, Mahadeva Ghat, in Chausa.
He said the bodies seem to have been thrown into the river. By some accounts, there could be closer to 100 bodies.
“They are bloated and have been in the water for at least five to seven days. We need to investigate where they are from, which town in UP,” said another official, KK Upadhyay.
The villagers have also said that the death figure is completely different from what the administration is reporting.
There was fear and panic in the nearby areas as villagers feared the spread of infection due to the dead bodies. A villager also said that the bodies need to be cremated as soon as possible.
District Magistrate Aman Sameer had ordered postmortem of all the dead bodies but the picture of burying all the dead bodies in the same pit without postmortem has come out from Mahadeva Ghat itself.
In the pictures, all the dead bodies are buried together with the JCB under the supervision of BDO and Circle Officer of Chausa Block.
Those who disposed of the corpses were neither given nor possessed any PPE kit.
The burial person said that about 40 corpses have been buried, while almost as many corpses are still outside.

Michael Flor, 70, who became the longest-hospitalised Covid-19 patient at Swedish Medical Center in Issaquah, a city in King County, Washington state, and survived, knew the bill would be a hefty one but looking at 181-page long bill left him speechless.   Michael Flor, came so close to death in the spring that a nurse Read More…

M Vidyasagar, a scientist involved in the Sutra Model which uses mathematics to project the trajectory of COVID-19 has categorically warned  ., “If the vaccination drive against coronavirus is not ramped up and COVID-19 appropriate-behaviour is not maintained, there is a possibility of a third wave of the pandemic in 6-8 months”  He, however, stressed Read More…

82. Cultivate the land and feed.