The flood situation in Assam further deteriorated on Thursday 23 July) with four more persons losing their lives, taking the toll to 93, even as the number of people affected rose to 28.32 lakh across 26 districts, officials said.

People in the state of Assam affected by flood complained both BJP governed state and centre government did not heed their cries for help in th hour of distress
According to the Assam State Disaster Management Authority ( ASDMA) officials, said that the floods which have inundated the state for over a month now had claimed 93 lives so far in Kokrajhar, Kamrup (Metro), Baksa, South Salmara, Darrang, Sonitpur, Biswanath, Tinsukia, Lakhimpur, Bongaigaon, Kamrup, Golaghat, Sivasagar, Morigaon, Dhubri, Nagaon, Nalbari, Barpeta, Dhemaji, Udalguri, Goalpara and Dibrugarh districts, while 26 others were killed in separate landslides since May 22. 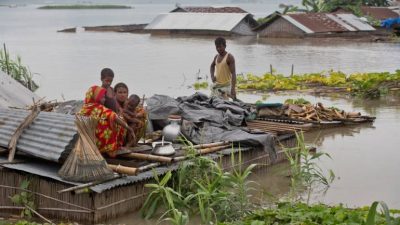 The officials added , of the 28.32 lakh people currently distressed, over 17.85 lakh are only in the state’s five western districts of Goalpara (469,499), Barpeta (421,522), Morigaon (367,471), Dhubri (278,041) and South Sakmara (249,423).
Officials of the Forest Department and the Assam State Disaster Management Authority (ASDMA) said that at least 123 wild animals have died in floods and 150 have been rescued so far, even as 92 per cent of the 430 sq km, world-famous Kaziranga National Park, home to more than 2,200 one-horned Indian rhinoceros, remained inundated.
The animals in the park that have died in the deluge include 12 rhinos, 93 hog deer, seven wild boars, four wild buffaloes. 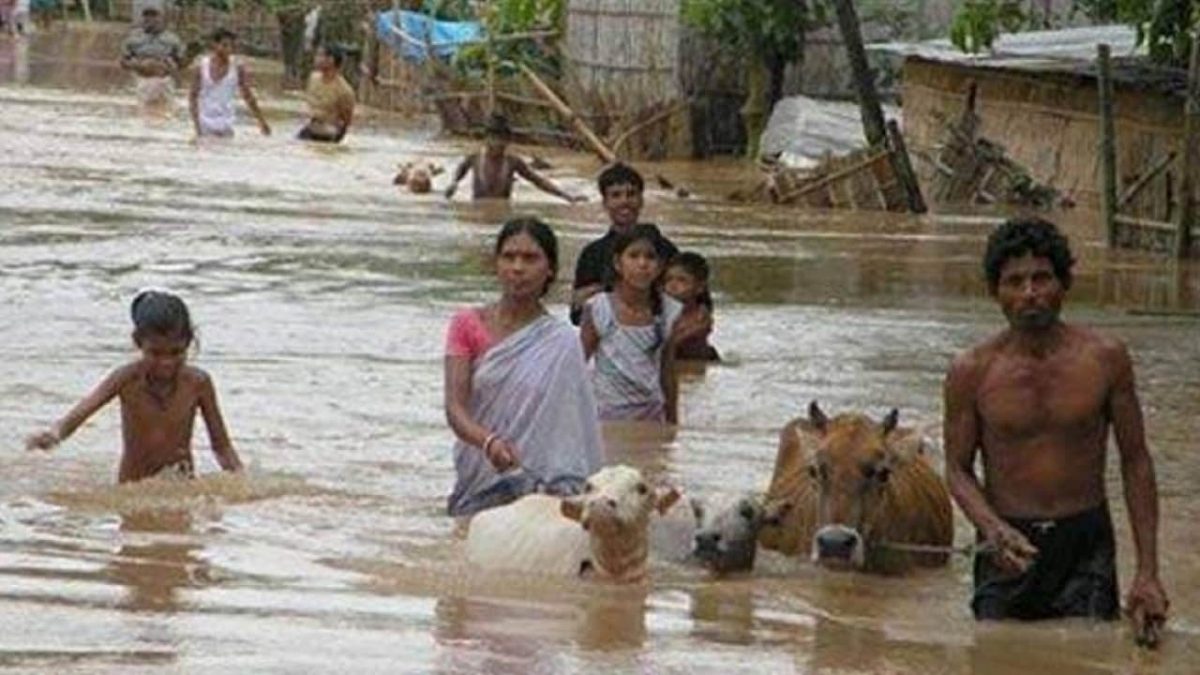 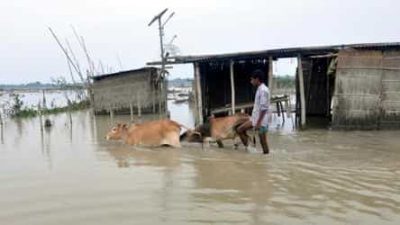 The flood waters have inundated over 2,634 villages and 119,435 hectares of crop area in 26 districts.
The district administrations have set up 456 relief camps and distribution centres in 26 districts, where around 47,215 men, women and children have taken shelter.
Of the 26 affected districts, 15 Dhubri, Goalpara, Barpeta, Morigaon, South Sakmara, Dhemaji, Lakhimpur, Darrang, Nalbari, Kamrup (Metro), Kamrup (Rural), Nagaon, Golaghat, Majuli, Bongaigaon are the worst-hit. 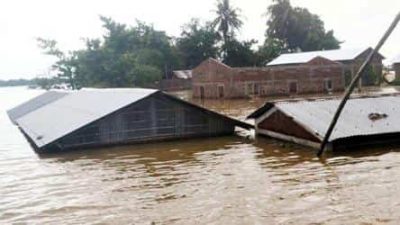 Besides erosion of river banks at a large number of places, roads, embankments, bridges, culverts and other infrastructure were damaged at many locations in 24 districts, the officials said, adding that hundred of houses were fully or partially damaged due to the floods.
Around 14 lakh domesticated animals and over 8 lakh poultry birds were affected.
Assam’s Revenue and Disaster Management Minister Jogen Mohan said that the flood water damaged 204 embankments and 174 bridges in the state.
16 National Disaster Response Force teams and many teams of State Disaster Response Force, along with the local administration, are continuously working to rescue affected people and render relief services, including distribution of necessary material to the marooned villagers.
Though Assam state is ruled by BJP party that is also power in centre but  no relief measures / packages been made as on date and leading national  TV medias that always  eulogies Prime Minster Modi and his BJP party refrained from highlighting the flood situation in Assam state .

Share via   The UAE outlaws all religious or racial discrimination under a legislation passed in 2015. The new sackings and suspensions come days after both the former and current Indian Ambassadors to the UAE cautioned their countrymen about the UAE’s strict hate speech laws. Similar warnings were issued by missions in other GCC countries. Read More…

Share via India’s real gross domestic product in Financial Year 2020-21 could contract 5.3 per cent, said India Ratings and Research on Wednesday   “This will be the lowest GDP growth in Indian history and the sixth instance of economic contraction, others being in FY58, FY66, FY67, FY73 and FY80,” said the ratings agency in Read More…

The defence minister hides behind AIADMK members, the PM hides in his room says RG

Share via High drama was witnessed in the Lok Sabha on Wednesday with Congress leader Rahul Gandhi launching a tirade on Prime Minister Narendra Modi over the Rafale deal and alleging he did not have the “guts” to face Parliament and “was hiding in his room”.   Finance Minister Arun Jaitley hit back to accuse Read More…