Skip to content
Indian media registered police attacks on Indian people  during lock down and register of lakhs of FIRs across India following 2 stages of lock down announced by Prime Minster Modi that instructed  people to be stay inside home for 40 days  In pursuance a PIL has been filed in the Supreme Court against FIRs registered under Section 188 of the IPC or for other petty offences against thousands of persons for violation of the lockdown imposed due to the COVID-19 pandemic.
The petition has been filed by former IPS Officer and the Chairman of the Think-tank Centre for Accountability and Systemic Change (CASC), Prof Dr Vikram Singh for a direction for to quash the FIRs registered under Section 188 of the Indian Penal Code (IPC), and for other petty offences during the lockdown. Section 188 of the IPC deals with Disobedience to order duly promulgated by public servant.
The petition points out that according to the think-tank’s research as many as 848 FIRs were filed under Section 188 in 50 Police Stations of Delhi alone. These FIRs were filed between the period of March 23 and April 13. The Uttar Pradesh government also released the number of FIRs through its official Twitter handle which stands at 15,378 FIRs against 48,503 persons.
The illegal police action, and increasing police brutality through frequent lathicharge during lockdown cannot be allowed to be normalized and institutionalized. 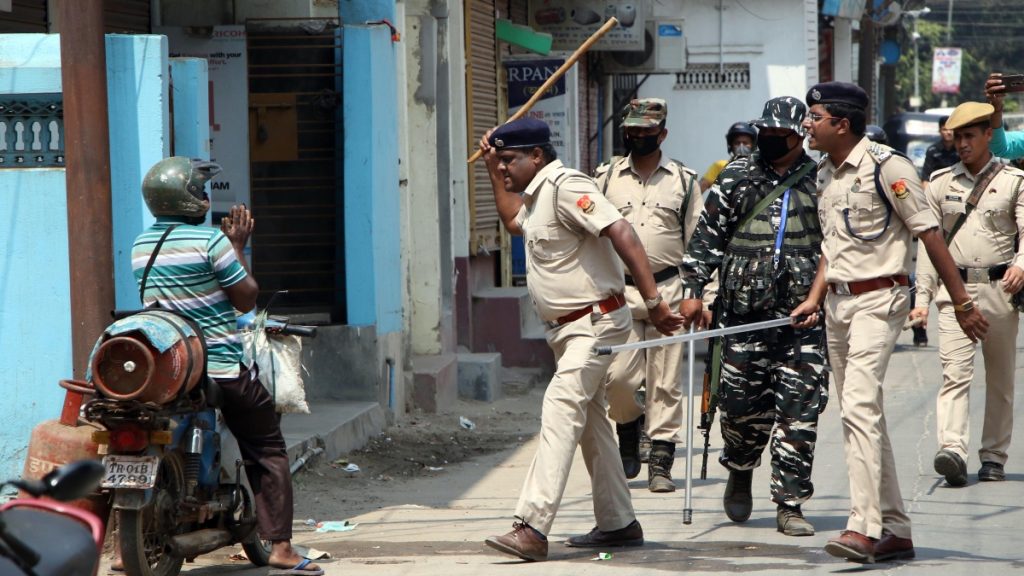 The petitioner submits that such an action by Police is in violation of the Fundamental Rights under Articles 14 and 21 of the people and also, in essence, goes against the order of the Supreme Court which passed certain directions for the decongestion of jails during this pandemic. On the other hand, Section 188, IPC mandates a jail term of six months.
Read more : RSS Given No Permission For Joint Inspection Says Telangana Police
This would also lead to an undue burden on the Police personnel who would have to work on the voluminous documentation and paperwork for these cases once registered. As stated in the petition,
[splco_quote]”The FIRs are being incessantly filed for trivial offences, which will have to go through their own process, eventually burdening the police, jails and whole criminal justice system.”[/splco_quote]
All the same, the petitioner emphasises that he is not promoting violation of the lockdown in any manner and adds that the situation needs to be handled humanely.
The petitioner has also urged the Apex Court to direct the Centre to advise States not to register any more such cases and to refrain from filing complaints for petty offences during the lockdown.
It is the petitioner’s case that no FIR can be registered under Section 188 of the IPCby the police. Rather,

[splco_quote]”It is most humbly submitted that S. 188 of the IPC must be read with S. 195 of the CrPC, which mandates that only a Magistrate can take cognizance of an offence under Section 188 IPC, and that too on a complaint submitted by a public servant.”[/splco_quote]

The petitioner contends that the legal processes cannot be now misused by the Police when the Disaster Management Act has been invoked.
That at a time when the Police is wielding immense powers, it is necessary for directions to be passed by this Hon’ble Court, so that they can be implemented at the national level, and judicial discipline is maintained.
Splco Reporter
Special Correspondent Group of right thinking writers who eulogise self expression in quest of truth in news making jointly contribute under the platform of splco.me a novel social media channel.

Pakistan intensified its crackdown against Islamist militants on Thursday, with the government announcing it had taken control of 182 religious schools and detained more than 100 people as part of its push against banned groups.   The move represents Pakistan’s biggest move against banned organisations in years and appears to be targeting Islamic welfare organisations Read More…

[splco_heading size=”15″ align=”left” margin=”30″]West Bengal Chief Minister Mamata Banerjee said on Monday that the Centre should not play politics at a time when the coronavirus pandemic has gripped the country. The Centre had also come down heavily on the Mamata Banerjee government for not allowing movement of goods traffic through border crossings between India and Bangladesh Read More…