Skip to content
During the current year’s summer season (March-May), the extent of area sown by agricultural crops this year is over 50% higher than what the State achieved during the 2019 summer.
As against the previous year’s area-sown figure of about 2.66 lakh hectares, it is 4.071 lakh hectares this time.
Of this, the share of pulses is about 1.5 lakh hectares; paddy 1.4 lakh hectares; oilseeds 55,900 hectares; millets 27,400; cotton 16,900 hectares; sugarcane 13,000 hectares and maize 10,500 hectares.
In Tamilnadu during summer season , harvesting of pulses accounted for the maximum of 73,000 hectares. This was followed by cereals on nearly 59,000 hectares and millets 55,400 hectares.
The early phase of the lockdown imposed on account of the COVID-19 pandemic March 25 and April 14 saw harvesting being taken up on around 10,000 hectares of farm lands in the State every day.
Totally, harvesting of various crops, including paddy, was completed on about 2.13 lakh hectares in three weeks in the State.
Of the remaining area, oilseeds were harvested from over about 21,000 hectares; sugarcane 4,560 hectares and cotton 530 hectares, according to data available with the State Agriculture Department.
Asked whether the pandemic played any role in higher coverage, Principal Secretary (Agriculture) Gagandeep Singh Bedi replied in the negative. 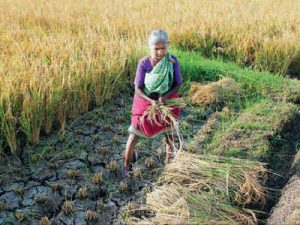 But better availability of groundwater was one of the contributory factors. “From the beginning, we have been driving home the point that agricultural activity should go on without hindrance even while adhering to norms of physical distancing. This might have helped,” Mr. Bedi pointed out.
During epidemic corona spread of virus in order to to ensure that fertilisers were sold at the doorstep of farmers, the department is operating 50 vehicles, covering 18 districts. Nearly 65,000 kg of different items of fertilizers such as urea and DAP were sold so far, benefiting 265 farmers.
At present, the department has got a stock of around 1.06 lakh tonnes of urea; nitrogen phosphate and potash composition (NPK) 1.96 lakh tonnes; Diammonium Phosphate (DAP)  83,000 tonnes and muriate of potash (MOP) — 60,000 tonnes.
As for seeds, the stock lying with the government is around 11,800 tonnes for various crops, of which paddy accounts for about 9,600 tonnes. The private sector has got a stock of seeds for over 6,600 tonnes, including paddy for 4,860 tonnes.
The Central and State governments have been urged to waive all the agriculture loans in view of the financial stress suffered by the farmers due to the COVID-19 pandemic.
Read More : Wheat Crop 2020 Harvest : Lack Of One Procurement Policy In North India Affects Farmers
In a statement the president, Tamil Nadu All Farmers Organisations Committee P.R.Pandian said the farmers were either not able to dispose of their produce or forced to sell their produce at a throwaway price.
Though the efforts taken by the State government to ensure the sale of vegetables and other horticulture produce, 80% of such products could get sold during temple festivals or through private functions.
As both these events have been banned in view of the COVID-19 virus scare, several horticulture farmers have let their produce rot in the fields.
Splco Reporter
Special Correspondent Group of right thinking writers who eulogise self expression in quest of truth in news making jointly contribute under the platform of splco.me a novel social media channel.

The Ramlila Maidan started filling up from about 10.30 am when farmers from Delhi, Haryana and Punjab started pouring in. About 13,000 people have reached the ground and many are still on their way.   It was a sea of red at Ramlila Maidan where thousands of farmers from across the country converged on Thursday Read More…

Reliance Industries Ltd’s telecom division has asked the Indian telecoms regulator to take action against rivals Bharti Airtel and Vodafone Idea Ltd for allegedly running a false propaganda campaign to attract its subscribers.   In a letter dated Dec. 10, Reliance Jio alleged that the two companies had created an impression that Reliance which also Read More…

The move comes against the backdrop of complaints from several state governments about the efficacy of rapid testing kits sourced from China.   A South Korean company has launched the production of Covid-19 rapid antibody testing kits at its subsidiary at Manesar in Haryana, with a capacity of making 500,000 kits per week, to meet Read More…

3 Replies to “Tamilnadu harvested 2.13 lakhs hectares of crops during 2020”