Skip to content
In a shocking disclosure Afghan media reports body of Danish Siddiqui, the Pulitzer-winning Reuters photojournalist who was killed in Afghanistan last month, was badly mutilated while in the custody of the Taliban, Afghan officials said.
Siddiqui, 38, an Indian national who took some of the most memorable news photographs from South Asia in recent years, was killed on the morning of July 16, when Afghan commandos he had accompanied to Spin Boldak, a border district recently captured by the Taliban, were ambushed.
Initial photographs from the scene showed Siddiqui’s body with multiple wounds, but fully intact.
But by that evening, when the body was handed over to the Red Cross and transferred to a hospital in the southern city of Kandahar, it had been badly mutilated, according to two Indian officials and two Afghan health officials, media reports said.
Taliban fighters were in control of the area at the time, and some photographs showed what appeared to be the group’s fighters standing around Siddiqui’s body, which was then intact.
The New York Times reviewed multiple photographs, some provided by Indian officials and others taken by Afghan health workers at the hospital, which showed Siddiqui’s body had been mutilated.
One Indian official said that the body had nearly a dozen bullet wounds and that there were tire marks on Siddiqui’s face and chest, media reports said.
As per media reports, one of the health officials in Kandahar said that the body, along with Siddiqui’s press vest, had reached the city’s main hospital at around 8 p.m. on the day he was killed.
His face was unrecognisable, said the official, who added that he could not determine exactly what had been done to the body.
There are conflicting reports about what happened on July 16, as Afghan special forces with whom Siddiqui was traveling tried to retake Spin Boldak.
Accounts from local officials, as well as Taliban members, suggest that Siddiqui and the Afghan unit’s commander were killed in a crossfire when their convoy was ambushed from multiple directions. 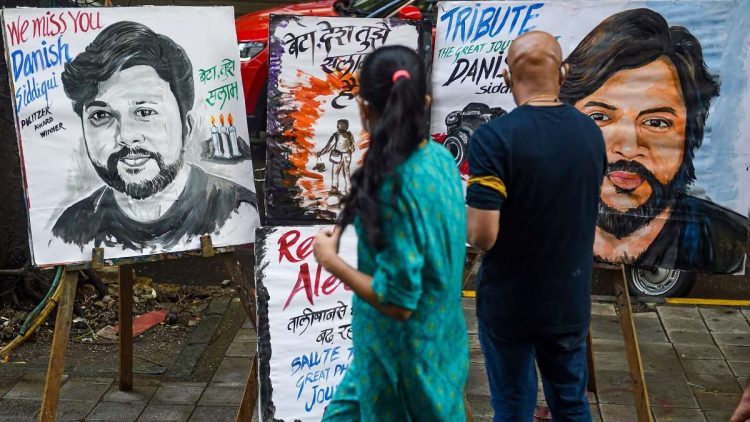 Their bodies were left on the battlefield as the rest of the unit retreated, according to this version of events.
Few  news outlets in Kabul  reported that Siddiqui might have been captured alive by the Taliban and then executed.
However these reports could not be confirmed. Indian official placed at Kabul has confirmed said that some of Siddiqui’s wounds appeared to be from gunshots at close range.
Many World leaders inclusive of USA president Joe Biden given condolences , also  social media bloggers were  burst with the stoic silence of Indian union Prime Minister  Modi .
Infact in twitter handle many Rignt wing RSS ideologists spread their happiness openly , as they were angry against  Siddiqui’s International  exposure of Delhi riots , Ganges valley burials of corona deaths ..

In the latest setback for Prime Minister Narendra Modi just months before the Lok Sabha elections. India’s unemployment rate rose to a 45-year high during 2017-2018, the Business Standard newspaper on Thursday quoted a government survey as showing,   Earlier this month, the Centre for Monitoring Indian Economy, a leading independent think-tank, said the country Read More…

Facebook which counts India among its largest markets with over 300 million users – has been in the eye of a storm after a Wall Street Journal (WSJ) report alleged that Facebook’s content policies favoured the ruling party in India.   The social media giant uses a mix of technology tools and reviewers to take Read More…

[splco_heading size=”15″ align=”left” margin=”30″]The Centre for Monitoring Indian Economy (CMIE) has reported COVID-19 crisis has added to a spike in the country’s unemployment rate to 27.11 per cent for the week ending on May 3, that is up from the under 7 per cent level before the start of the pandemic in mid-March,[/splco_heading]   CMIE Read More…

62. Live in unison with your countrymen.

Amit Khare is the new Advisor to Prime Minister