In a little over a month, the Jammu and Kashmir (J-K) administration has granted over 4 lakh domicile certificates to the applicants, reported The Tribune.

However, the region-wise data for how domicile certificates have been issued was not readily available.
Speaking to the newspaper, Pawan Kotwal, Principal Secretary, Revenue Department J-K, said: “So far, over four lakhs domicile certificates have been granted to the applicants.
Though a period of fifteen days has been fixed for issuing a certificate to an applicant, yet we have asked all revenue officers, including Tehsildars, to complete the process within two days.”
Over a query regarding the rejection of a large number of online applications, the top revenue officer told the newspaper that they have taken up the issue with the Principal Secretary, IT Department who has assured the expansion of the system.
[splco_spacer] 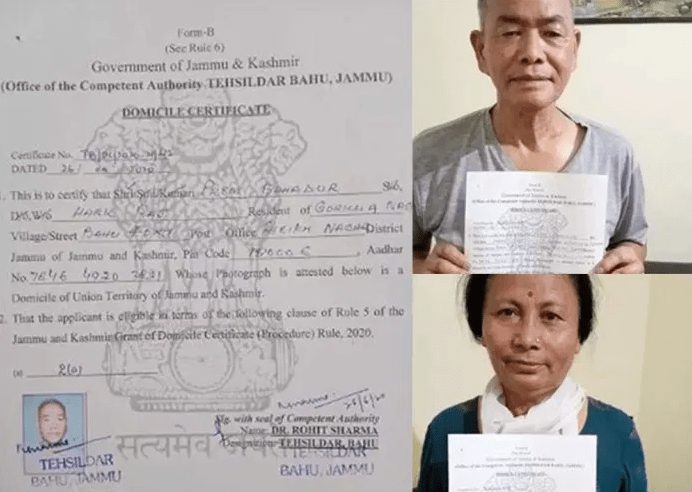 [splco_spacer]
On 5 August 2019, the Government of India had revoked the special status of J-K by scrapping the article 370 of the constitution. For seven decades, it had barred non-locals from acquiring land and property.
However, the government later introduced a new domicile policy for J-K included all the outsiders who have stayed in J-K from seven to fifteen years among other criterion. Kashmir-based parties have opposed the new law, alleging “it is an attempt to change the demography of the J-K”.
“We also received some complaints concerning the rejections of online applications. Besides, there are reports of crashing of official website and difficulty in downloading certificates.
We are alive to the situation and all such issues to be dealt with the expansion of the system,” Mr. Kotwal said.
On 27 June, the Divisional Commissioner Jammu Sanjeev Verma had started the process to hand over domicile certificates to Valmikis, West Pakistan refugees and Gurkhas, who were considered to be the worst-sufferers of Article-370.
According to the domicile rules, if a tehsildar in Jammu and Kashmir fails to issue a domicile certificate to applicants on time, they may attract a punishment of having to forfeit up to Rs 50,000 from their salary.
[splco_spacer]
Input : Syndicate Agency Feed

Thirty-three persons including 16 militants and 10 personnel from combined forces have been killed in the month of August alone in Kashmir Valley.   One person was also shot dead on LOC by Army in Rajouri while militants shot dead a BJP worker and abducted and subsequently killed a Panch from Khonmou area of Srinagar Read More…

Earlier In a series of tweets this week, Home Minister Amit Shah called the People’s Alliance for Gupkar Declaration (PAGD)  and the reluctant Congress party a “gang”, accusing it of hobnobbing with foreign players. Reacting to this former Union minister Prof. Saifuddin Soz said ‘The fact is that the present day governance at the Centre Read More…

Four security forces personnel, including an Army officer, and three militants were killed during a failed infiltration bid by the ultras along the Line of Control (LoC) in Jammu and Kashmir’s Machil sector on Sunday, officials said.   The militants made an abortive bid during the night to infiltrate into the Indian side of the Read More…