Skip to content
Uttar Pradesh cabinet minister Kamal Rani, who was undergoing treatment for coronavirus at a Lucknow hospital, died on Sunday morning. She was 62.
Kamal Rani, minister of technical education in the state government, was admitted to a Rajdhani Covid hospital on July 18.
“The condition of minister deteriorated after infection in lungs. She was put on life support system.
Despite the best efforts of doctors she passed away on Sunday,” said Director PGI professor Radha Krishna Dheeman.
Chief minister Yogi Adityanath has expressed grief over the demise of the minister.
The CM, who was set to review today preparations for Ram temple bhoomi pujan ceremony on August 5, has cancelled his Ayodhya visit after the news of the minister’s death. Rani was an MLA from Ghatampur constituency in Kanpur.
Kamal was born on 03 May 1958 in Lucknow, Uttar Pradesh. She pursued her masters in sociology at Kanpur University.
[splco_spacer] 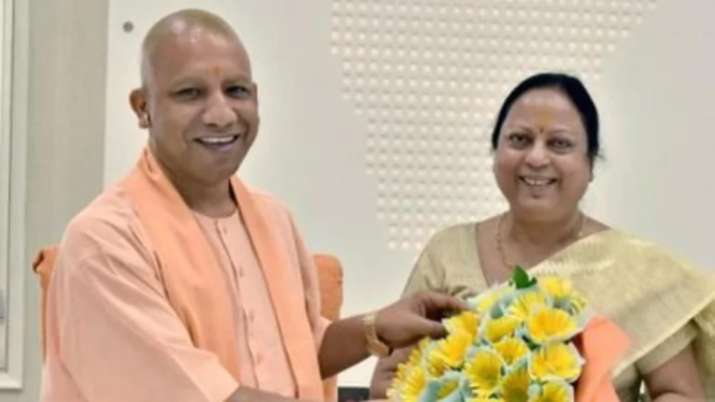 [splco_spacer]
She married Kishan Lal Varun on 25 May 1975. The couple had a daughter and a son.
From 1989 to 1995, she was a member of Mahanagar Parishad, Kanpur. She was elected to 11th Lok Sabha in 1996.
From 1996 to 1997, she served as the member of the committee on Labour and Welfare and the Committee on Industry.
She worked as the member of the Committee on the empowerment of women in 1997. In 1998, she was re-elected to the Parliament for a second term.
From 1998 to 1999, she served as the member of various committees including the Committee on Official language, Committee on labour and welfare and the Consultative Committee of Ministry of Tourism.
“Kamal Rani Varun respected public aspirations as a minister. As a minister, she made commendable contribution in efficiently discharging departmental functions,” tweeted UP chief minister’s office.
“Her death is an irreparable loss to the society and the government. Chief Minister Yogi Adityanath, while paying a humble tribute, expressed his deepest condolences to the bereaved family,” read another tweet from the CM’s office.
Madhya Pradesh CM Shivraj Singh Chouhan, who is being treated for Covid-19 in a hospital, tweeted his condolence message for the minister.
“Sad news of untimely demise of cabinet minister Kamal Rani ji in Uttar Pradesh government. I pray to God for the peace of the departed soul and the strength of the family to bear this profound sorrow,” tweeted Chouhan.
[splco_spacer]

Senior Advocate at the Supreme Court, Dushyant Dave, on Saturday said that in India now, nobody in the government is answerable to anyone and the Judges who have the duty to hold the government accountable have failed in this duty in the last eight weeks.   Recently Indians taken aback  not only by action of   Read More…

Modi government flouted rules, favoured Gautam Adani to lease out six airports to his firm allege CPM MP Elamaram Kareem   Before the COVID-19 pandemic hit the country, the Adani Group had inked agreements with AAI for the management, operations, and development of Ahmedabad, Mangaluru, and Lucknow airports in February this year.   The concession Read More…

[splco_heading size=”15″ align=”left” margin=”30″] After conducting trail for 2 years  Gujarat HC had set aside Chudasama’s December 2017 election as void and illegal on the grounds of manipulation and malpractice. The BJP leader had been declared a winner over Congress candidate Ashwinbhai Rathod, by a margin of 327 votes. [/splco_heading]   When the candidate Ashwin Rathod Read More…