Skip to content
Share via
Tension prevailed at Pamba, the foothills of the Lord Ayyappa Temple in Kerala, on Sunday morning as a group of 11 women below the age of 50 years, tried to trek the hilltop shrine, even as devotees protested against the move.
Though they attempted to trek through the traditional forest path, about five kilometres from the temple complex, they could not go forward as devotees started ‘namajapa’ (chanting of hymns of the lord) to protest against them.
Defying prohibitory orders invoked in place, hundreds of devotees gathered here chanting Ayyappa hymns aloud.
The women, members of the Chennai-based “Manithi” outfit, were squatting on the road since 5.20 am following the continuing protests. Police have thrown a security ring around them.
The talks held by police with Selvi, the coordinator of the outfit, failed as she insisted that they would not return without darshan. 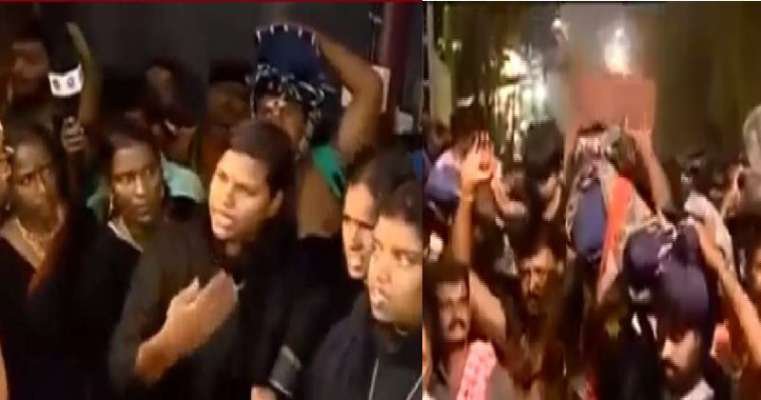 “Police is asking us to go back in view of protests. But, we won’t go back without darshan. We will wait here till we are allowed to trek climb the hills,” she told reporters after the brief talks.
Women, in the age group of 10-50 years, are traditionally barred from entering the Sabarimala temple. But the Supreme Court, through its September 28 landmark verdict, lifted the curb and permitted women of all age groups to offer prayers at the temple.

The women group reached Pamba by 3.30 am through the Idukki-Kambamedu route in Kerala-Tamil Nadu border.

Local television channels said they had to face protests at various places on their way but they managed to reach Pamba.
Thilakavathi, another member in the group, said they would continue the protest till they could offer prayers to Lord Ayyappa.
“Priests of the local temple at Pamba did not cooperate with us and declined to get our ‘irumudikettu’ (sacred offering to the God) ready as per custom. So we did it on our own,” she said, adding that more members of their outfit would reach the state soon to visit Sabarimala.

Of the 11 women, six carried the traditional irumudikettu which is mandatory to climb the ‘pathinettam padi’ (holy steps leading to sanctum sanctorum). 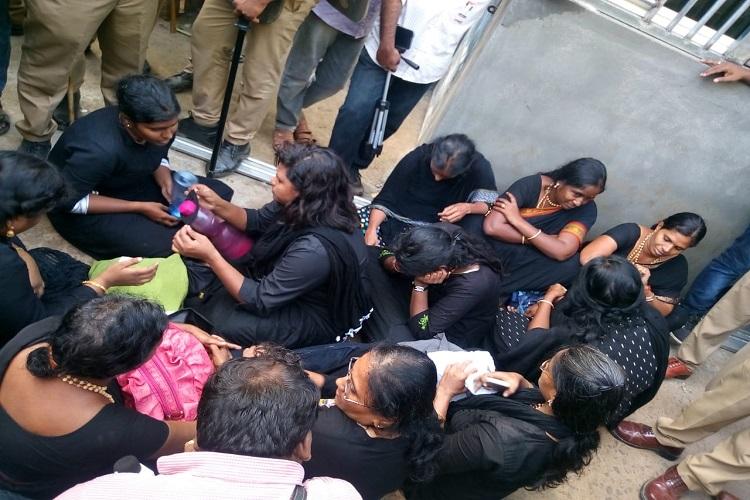 Clad in the customary black dress, the women, led by the outfit’s coordinator Selvi, insisted to the police that they want protection to offer prayers at the shrine.
Meanwhile, causing concern about the safety of the women, the number of devotees, staging namajapa protests, is steadily increasing here.
The pilgrims, who came back after offering prayers at Sannidhanam, could also be seen joining the protesters.
Travancore Devaswom Board (TDB) president, A Padmakumar expressed hope that no untoward incident would take place.
Anxiety had loomed large in and around Sabarimala temple for some days as ‘Manithi’, the outfit, had declared that a group of 50 women, all below the traditionally barred age of 50 years, would visit the shrine Sunday. 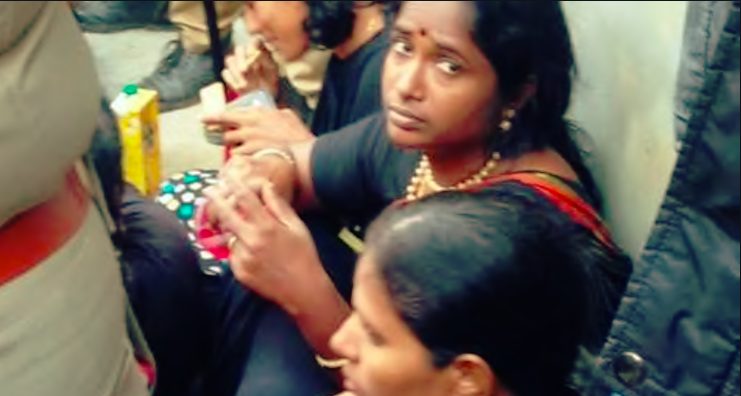 Selvy had told a Malayalam TV channel that the group comprised women from different states, including Tamil Nadu, Madhya Pradesh, Odisha and Karnataka besides Kerala.
She had also said they had already written to the office of Kerala Chief Minister Pinarayi Vijayan and informed him about their plan to trek to the hill temple.
Kerala had witnessed massive protests by devotees opposing the entry of girls and women in the 10-50 age group into the Sabarimala Temple since the Kerala government decided to implement the September 28 verdict of the Supreme Court permitting women of all age groups there.
Over a dozen women have so far made unsuccessful attempts to trek the holy hills.
Four transgenders, who were earlier stopped from proceeding towards the Lord Ayyappa temple citing security reasons, offered prayers at the hill shrine under heavy police security earlier this week.
The Kerala High Court earlier this month appointed a three-member committee, vesting them with powers to oversee law and order and other problems faced by pilgrims during the ongoing annual season.

Share via B Stalin, president of the Peikulam Traders’ Association.“ has confirmed There is no doubt that the police personnel at Sathankulam police station thrashed both the father and son to death. The magisterial inquiry revealed a minimum of 80 wounds on their bodies,”   Other vendors alleged that the policemen had assaulted the two Read More…

Share via In a shocking revelation, Kerala’s BJP President PS Sreedharan Pillai has revealed that the Sabarimala agitation ‘was part of BJP’s agenda’ and that ‘it was a golden opportunity for them in the state’. Pillai courted a controversy Monday as TV channels aired a video clip in which he purportedly said that Sabarimala temple Read More…