Skip to content
Share via
Family members of arrested Jamia Millia Islamia student Safoora Zargar say they are “appalled and upset” by the attempts made to slander her on social media, but her husband says he is keeping faith in the country’s judicial system.
Zargar, a 27-year-old M.Phil. student from Jamia, is over three months pregnant, and was arrested by the Delhi Police’s special cell on 10 April. Her crime is she is part of anti CAA agitation in streets
She was later denied bail and, on 21 April, and charged under the stringent Unlawful Activities Prevention Act (UAPA). She was associated with the Jamia Coordination Committee (JCC), and was part of the anti-Citizenship Amendment Act protests organised by university students in December and January.
Salman Nizami
@SalmanNizami_
Activist Safoora Zargar (pregnant) is in Jail during Ramadan, hatemongers like Kapil Mishra who incited riots are FREE. Crime of being a Muslim in Modi’s INDIA. Have some SHAME! #ReleaseSafooraZargar
She was arrested for allegedly leading the anti-CAA protest at Jaffrabad metro station in February.
On Monday, three weeks after her arrest, her family found a hashtag in her name, #सफूरा_जरगर, trending on Twitter, hours after Delhi BJP leader Kapil Mishra commented on her pregnancy.
Kapil Mishra
✔
@KapilMishra_IND
Please don’t connect her pregnancy with my speech
It doesn’t work that way 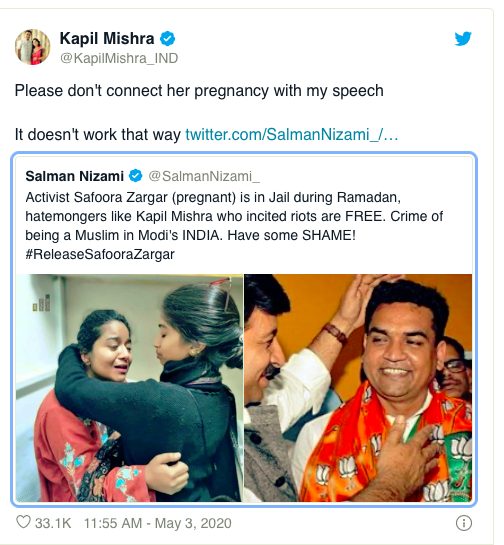 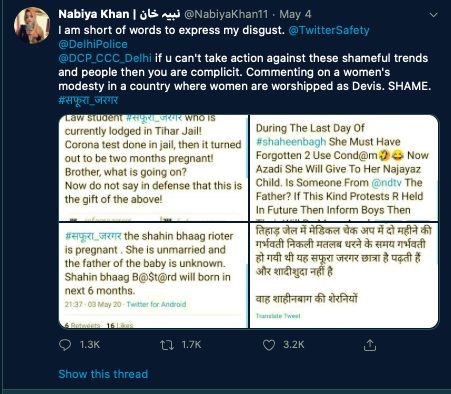 Share via Chhattisgarh Chief Minister Bhupesh Baghel has written to PM Narendra Modi on Wednesday demanding that funds deposited in the PM-CARES fund by the mining projects and industrial units of Chhattisgarh should be transferred back to the state government.   Baghel stated in the letter that CSR funds were established in view of the Read More…

Share via Normal life was hit in many Indian  states Monday with offices and educational institutes closed and vehicles off the roads during an united opposition-sponsored ‘Bharat Bandh’ which was largely peaceful, barring some incidents of violence. A three-year-old girl died in Bihar’s Jehanabad district which the BJP alleged was due to delay in find Read More…

Share via In another Sexual allegations against BJP lawmakers a 22-year-old woman has filed a complaint in Bareilly accusing ruling BJP MLA Kushagra Sagar, 26, of raping her.   She has alleged Sagar sexually abused her from 2012 when she was a minor and 2014. Sagar, who is due to get married next month, had Read More…