Skip to content
Delhi had recorded the worst pollution levels on Diwali in the last four years due to the combined effect of stubble burning, firecrackers and unfavourable meteorological conditions.
The air quality on the day after Diwali was also the poorest since 2016.
Delhi Surpassed previous year Pollution level  and recorded an overall AQI of 414 on Saturday (Diwali). On Sunday, the 24-hour average AQI stood at 435.
In a special report, the Central Pollution Control Board said that almost all pollutants reported higher values on Diwali day this year as compared to 2019.
It could be attributed to bursting of firecrackers, higher share of stubble burning and unfavourable meteorology during the festival season, the CPCB said.
However, rain and high-velocity winds came to Delhi’s rescue this year. 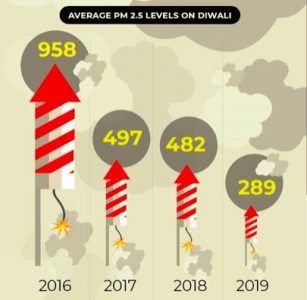 Light rain and favourable wind speed brought pollution levels down significantly in Delhi and its suburbs on Monday, while weather experts said the air quality is likely to improve further.
Thanks to rain city’s air quality index (AQI) improved to 300 at 9 am, which falls in the poor category, from 467 around the same time on Sunday.
The neighbouring cities of Faridabad (256), Ghaziabad (292), Greater Noida (302), Gurgaon (314) and Noida (312) recorded their AQI in “poor” and very poor” categories after braving “severe” air quality on Saturday and Sunday.
Winds gusting up to 40 kilometre per hour swept away the pollutants, while light rainfall in the afternoon and evening on Sunday washed everything down.
Kuldeep Srivastava, the head of the India Meteorological Department, said the wind speed will be favourable for dispersion of pollutants on Monday as well.
The Ministry of Earth Sciences’ air quality monitor, SAFAR, had also predicted that pollution levels may recede to the “poor” category “in case of enough rains and washout”.
The air quality is likely to stay in the “very poor” category on Tuesday and Wednesday, it said.

A Delhi court on Tuesday 23 Feburary granted bail to climate activist Disha Ravi, arrested in connection with allegedly being involved in sharing a “toolkit” on social media related to the farmers’ protest, terming evidence produced by police as scanty and sketchy.   Additional Sessions Judge Dharmender Rana granted relief to Ravi on a personal Read More…

A fact-finding report released by the CPM on Wednesday on the communal violence in Delhi in February has held Union home minister Amit Shah responsible for the escalation of the violence and prejudicing the probe. The report, steered by CPM politburo member Brinda Karat and state secretary K.M. Tewari, was undertaken to give context and Read More…

Facebook charged as a co-accused in the Delhi riots investigation : Delhi Assembly Committee

The Delhi Assembly panel committee headed by AAP MLA Raghav Chadha has served notice to Mohan to appear before the committee on September 15. Chadha said they had received a number of complaints alleging that the Facebook authorities concerned willfully ignored material allegedly spreading hatred in India.   After careful deliberations on the allegations made Read More…