The Supreme Court on Monday deferred the hearing on a habeas corpus petition for the release of journalist Siddique Kappan to November 20.
The court refused to hear the plea on its merits, citing the pendency of a “spate of petitions” under Article 32 as the reason.
Chief Justice SA Bobde said the top court will issue a notice to the Uttar Pradesh government seeking a response to the plea, but might still direct the petitioner the Kerala Union of Working Journalists, or KUWJ to the Allahabad High Court.
A habeas corpus is a petition filed under Article 32 of the Indian Constitution that allows the court to direct the government to produce a person before it to verify if they have been detained according to the procedure established by law.
Kappan, 41, was arrested in Mathura, Uttar Pradesh, on October 5 and booked for sedition and under the draconian anti-terrorism law, the Unlawful Activities Prevention Act, or UAPA.
He was on his way to Hathras to report on the alleged rape and murder of a Dalit teenager by upper caste Thakur men. Kappan was travelling with three other men Athikur Rehman, Alam and Masood who were also detained and charged with the same offences.
At the hearing today, Kapil Sibal, counsel for the journalist union, began by pointing out the shortcomings of the Uttar Pradesh government’s case against the journalist.
He told Bobde that the FIR filed against Kappan does not mention him. Yet, he added, “the magistrate did not allow Kappan to meet his lawyers or family or friends”.
The chief justice was not moved and refused to discuss the matter on its merits.
“Why can’t you go to the high court?” he asked Sibal. In October, the top court had directed the KUWJ to approach the Allahabad High Court for the incarcerated journalist’s release and adjourned the matter for four weeks.
Bobde said there was a “spate of petitions” under Article 32 pending before the top court and it was trying to “discourage” them. Article 32 deals with the Supreme Court’s powers to provide relief for the violation of fundamental rights.
“We are quite aware of our powers under 32 and the number of times we have interfered,” the chief justice said. “I have myself presided over benches that have interfered.”
“I understand,” Sibal responded. “I would not have done it but for the fact that this is a journalist against whom there is nothing.”
The court interrupted and told the lawyer that he was once again “sliding into the merits of the matter”.
When Sibal insisted that the circumstances were “exceptional”, the CJI said the court will issue a notice to the UP government.
“Then, in the meantime, I want bail, mi’lord,” Sibal said. “There is nothing against the man.” He added that the petitioners couldn’t meet Kappan in jail.
“But get somebody here,” the court said, adjourning the hearing. “We are keeping this on Friday. You get the state here.”
[splco_Shortcodesspacer] 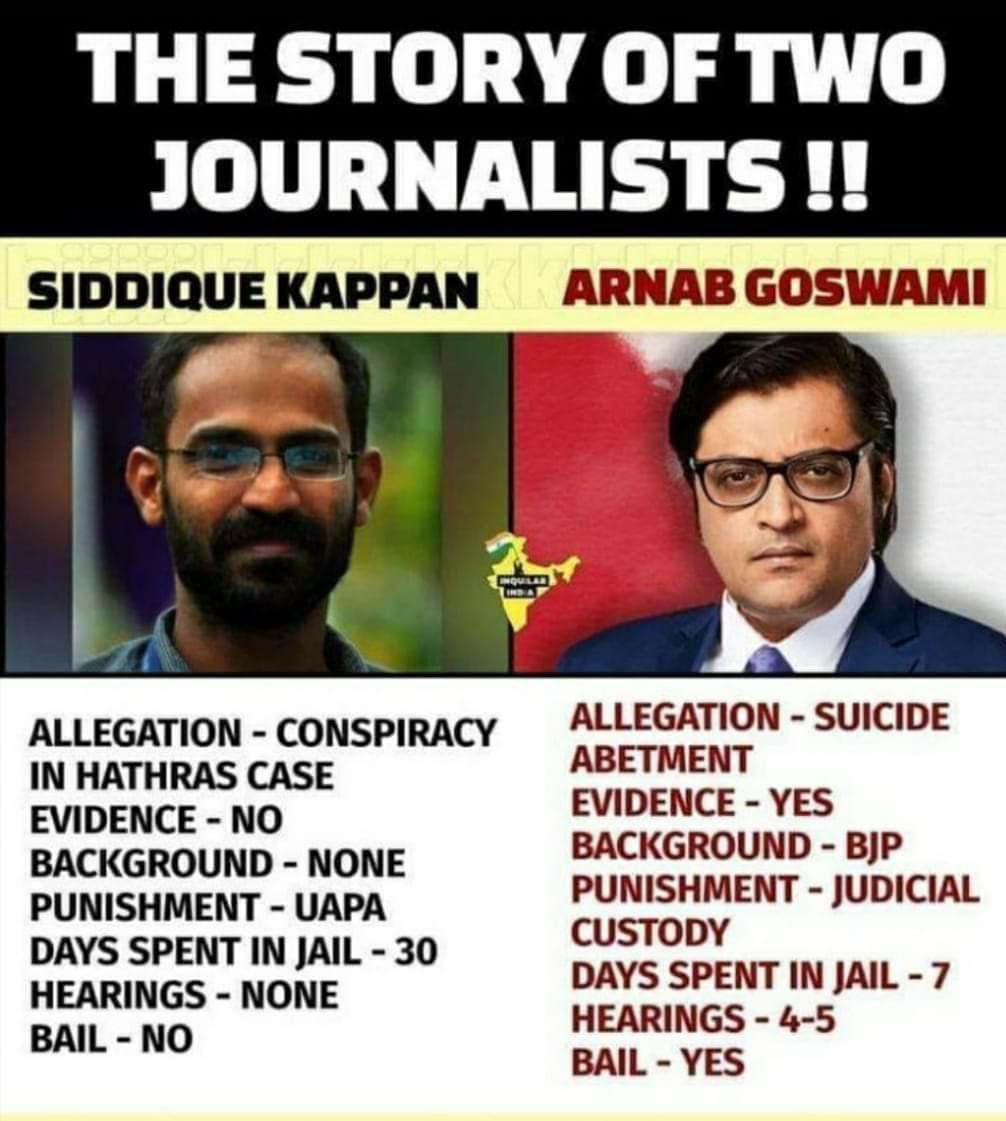 [splco_Shortcodesspacer]
The Supreme Court has faced flak for having “double standards” on personal liberty since it gave lightening  interim bail to Arnab Goswami, editor-in-chief of the pro-government Republic TV, in an abetment to suicide case.
“We must send a message today to the high courts as well. Please exercise your jurisdiction to uphold personal liberty,” the court said in its order granting bail to Goswami.
Last week, a Mathura court dismissed the bail plea of Athikur Rehman, Alam and Masood, stating that the charges against them were serious.
The UP police have alleged that the three men and Kappan are linked to the Popular Front of India, an Islamist group, and were conspiring to inflame religious enmity and organise a “caste dispute” over the rape and murder of the Dalit woman in Hathras.
According to the Print, Kappan, who is based out of Delhi, once worked for Tejas Daily, the PFI mouthpiece, but was critical of the organisation’s role for “hijacking the Muslim community’s genuine struggles through violent means”.
Since January this year, Kappan has been covering politics for the Malayalam news portal Azhimukham.
In its petition, the KUWJ has asked for Kappan’s immediate release and made a case for equal access for journalists covering the Hathras incident.
“The ultimate test of democracy lies in the freedom of speech and expression. Media is the breath of democracy,” the petition reads.
“Denial of access of the journalists to the place of news seriously connected with the dignified life of citizens for reporting is a gross violation of Article 14, 19(1)(a) and 21 of the Constitution.” 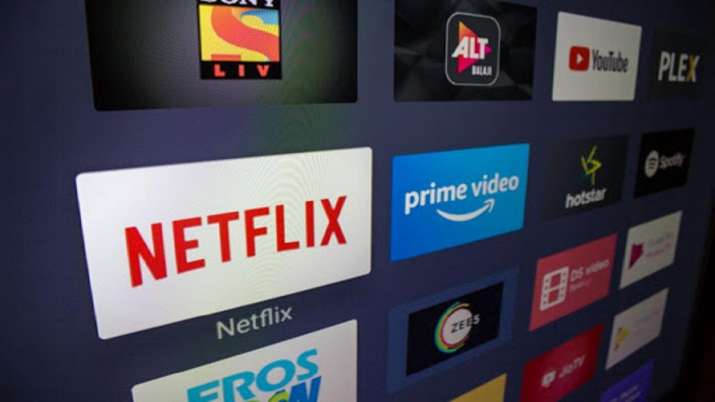 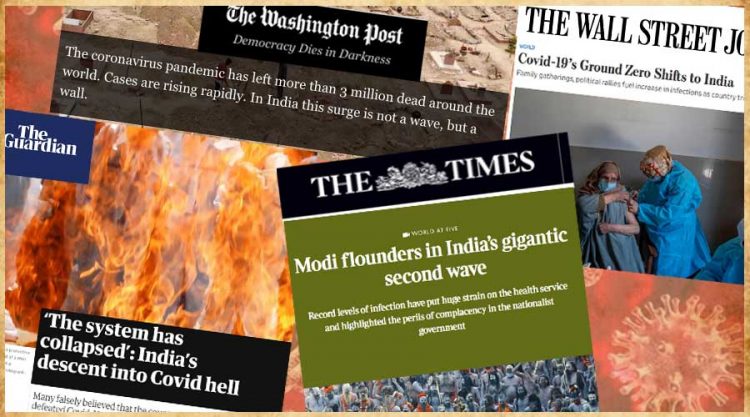 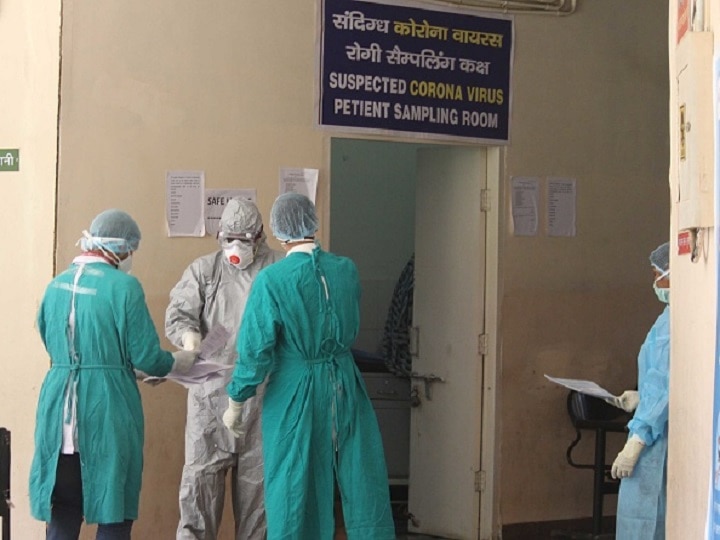