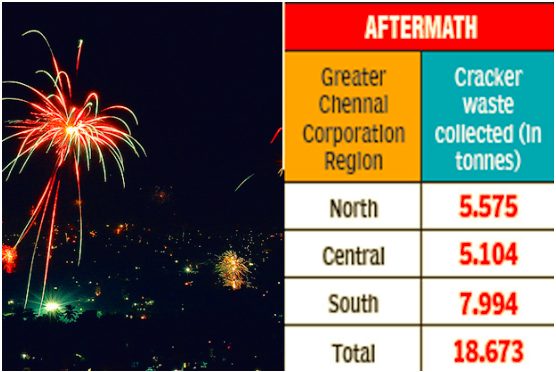 “Firecracker waste contains heavy metal toxins, which can reduce soil fertility and also seep into the groundwater and affect the health of residents,” said a senior official in the Solid Waste Management department.
Firecracker waste would be disposed of at Industrial Waste Management Association facility at Gummidipoodi, which handles hazardous wastes.
Among the zones of the Corporation, Southern region, tops the slot with 7.94 tonnes of waste , followed by 5.575 tonnes in the north.
To a question of whether the purchasing power of People has come down or the affect of Corona virus Corporation official refuse to comment
Splco Reporter
Special Correspondent Group of right thinking writers who eulogise self expression in quest of truth in news making jointly contribute under the platform of splco.me a novel social media channel.

Homebuyers had booked the flats in Pondur village, Sriperumbudur Taluk of Kancheepuram district and paid advances and further amounts as agreed to by them to Marg Properties Limited,.   The flats were allotted to the buyers and the due date for delivery of the flats was June 2013.   As per the provision of Read More…

An expert panel, set up by an institute under the Ministry of Home Affairs (MHA), has predicted a third wave of COVID-19 hitting the country anytime between September and October and suggested significantly ramping up the vaccination pace.   The committee of experts, constituted by the National Institute of Disaster Management (NIDM), also said that Read More…

IT Raids are being conducted at the offices Chennai leading Hotel chains of Saravana Bhavan, Grand Sweets, Hot Breads and Anjappar Group in Chennai.   Searches are underway at 32 locations in the city, including the homes and offices of the directors of the restaurant groups.   Income Tax department officials said the searches are Read More…