Skip to content
Chattisgarh Police and bureaucracy has taught a lesson to those who with out any verification and tend to believe everything on social media as gospel truth
The Raipur Police in Chhattisgarh have arrested a man, identified as Ravi Pujar, who was running a Facebook page with 10,000 plus followers in female disguise of fake id in name Nisha Jindal.
Ravi a RSS ideologue and a fan flower of Indian Prime Minister Modi was arrested for disturbing communal harmony.
But the imposter’s agony did not end with his arrest as the cops did a unique punishment and made him share his real photo on the Facebook page to inform 10,000 followers of ‘Nisha Jindal’ about his true identity.
Sharing the man’s photo, IAS officer Priyanka Shukla wrote, “When the Raipur Police reached to arrest Facebook user Nisha Jindal, then they learnt that Ravi, who has not been able to pass engineering for 11 years, was in real ‘Nisha.’ The police made Ravi post his truth to inform 10,000 plus followers of Nisha.”
[splco_spacer] 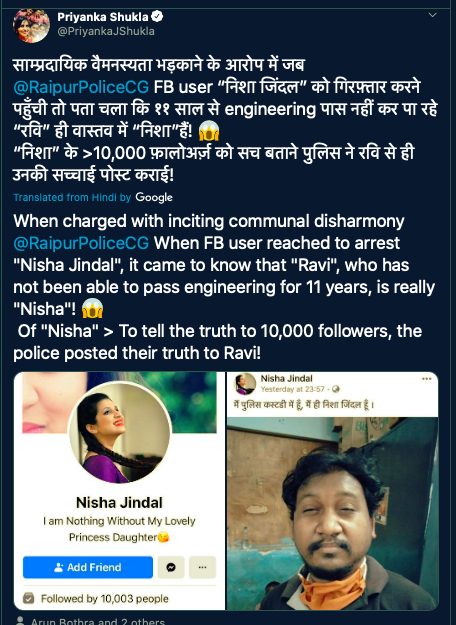 Ravi’s arrest left Twitterati in splits. IPS officer Arun Bothra tweeted, “Am thinking about those who followed him looking at the DP.”

[splco_spacer]
[splco_quote]Shukla replied, “Sir.. as you can see in the fb profile.. she i mean “he” had more than 10,000 followers.”[/splco_quote]
The man has been booked under various sections of the IPC including sections 153 (promoting disharmony) and 295 (insult to religion).
Splco Reporter
Special Correspondent Group of right thinking writers who eulogise self expression in quest of truth in news making jointly contribute under the platform of splco.me a novel social media channel.

PNB reports another NPA scam of Rs 38 billion, after the massive Nirav Modi fraud last year   Now there is one more fraudlent system detected but from the same Punjab National Bank reported the this to the Reserve Bank of India.   The fraud took place at its Chandigarh branch, and in its Hong Read More…

In major setback that question the authority of Modi led BJP government Punjab government also on Monday became the ninth state to revoke general consent to the Central Bureau of Investigation (CBI) to carry out any investigation in the state.   This means henceforth The investigating agency will now have to take permission from the Read More…

Sanjiv Bhatt, a prominent critic of the Narendra Modi government, has been behind bars in connection with a 22-year-old narcotics case.   The former IPS officer had moved the Gujarat High Court in December 2018, seeking bail in the matter after a Palanpur court in Banaskantha district on December 7 rejected his bail plea in Read More…

93. Don't agree with the stubborn.