Skip to content
Share via
In a swift development that caught many surprise on the date of Modi’s birthday bash by BJP ., SAD president Sukhbir Singh Badal announced in the Lok Sabha on Thursday that party leader and Union Food Processing Industries Minister Harsimrat Kaur Badal will quit the Narendra Modi government in protest against the three farm Bills tabled by the Centre in parliament.
The differences between Bharatiya Janata Party (BJP) led National Democratic Alliance (NDA) and Shiromani Akali Dal (SAD) came out in the open on Thuesday with the Union Food Processing Minister Harsimrat Kaur Badal, wife of SAD president Sukhbir Singh Badal, quitting from the Narendra Modi Cabinet.
Harsimrat Kaur also made the revelation on her Twitter account, writing “I have resigned from Union Cabinet in protest against anti-farmer ordinances and legislation. Proud to stand with farmers as their daughter and sister.”

I have resigned from Union Cabinet in protest against anti-farmer ordinances and legislation. Proud to stand with farmers as their daughter & sister.

In his speech during a discussion on two of the farm Bills – the Farmers Produce Trade and Commerce (Promotion and Facilitation) Bill and the Farmers (Empowerment and Protection) Agreement on Price Assurance and Farm Services Bill Sukhbir Singh Badal said the proposed laws will “destroy” 50 years of hard work done by successive Punjab governments to build the farm sector.
Badal recalled Punjab’s massive contribution in making India self-sufficient in food grain production as he vehemently opposed the Bills. “I announce that Harsimrat Kaur Badal will resign from the government,” he then said in Lok Sabha.
She is the only SAD representative in the Modi government. The Punjab party is the oldest BJP ally.
An NDA ally, SAD has been at loggerheads with the BJP over the Bills, which have triggered strong protests in Punjab and Haryana by farmer organisations.
[splco_spacer] 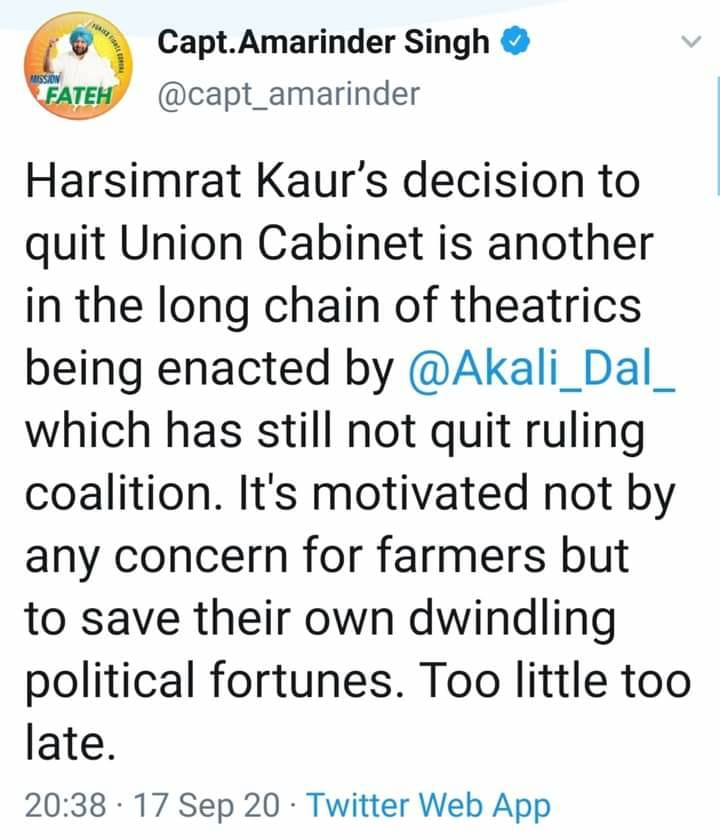 [splco_spacer]
Earlier Terming BJP led Modi government  legislation a “direct and deliberate assault by the Centre on the interests of the farmers”, Punjab CM Captain Amarinder Singh said State Congress will challenge the Essential Commodities (Amendment) Act 2020, which was passed in the Lok Sabha today, in the court of law
Reacting to the resignation however Congress Punjab State Cheif Minister Amarinder Singh has termed this as drama

Share via The BJP sponsored 12-hour bandh protesting the death of two youths at Islampur in North Dinajpore had had virtually no effect in Kolkata but reports of sporadic clashes between BJP and TMC supporters were reported from different parts of the state. The Calcutta High Court directs the West Bengal government to ensure that Read More…

Share via The Centre on Monday complied with a Supreme Court order and handed over to petitioners, who sought a court-monitored CBI probe into the procurement of 36 Rafale fighter jets from France, the document detailing the decisions taken to procure the aircraft. The document titled “Details of the steps in the decision-making process leading Read More…

Share via Supreme Court bench comprising CJI SA Bobde, J BR Gavai and J Surya Kant today issued notice to the BJP led Modi Government on a petition filed by three farmers seeking a direction for the process of updation of the National Population Register (NPR) to be declared void as unconstitutional.   The petitioners Read More…