Skip to content
Share via
After 5 days hectic search the end was as dramatic as the BJP buttered mafia Dubey’s surrender in a temple in Ujjain, Madhya Pradesh.
The surrender had left many bloody noses in UP police and they were looking at an opportune time to settle the score.
“No doubt it is a big embarrassment for UP Police that Dubey managed to reach Ujjain and stage-managed his surrender.
But it would be a bigger embarrassment if Dubey reaches Kanpur alive. The police should eliminate him once he enters the UP border,” a senior IPS officer who want to be unarmed told this reporter on Thursday night.
Another IPS officer Amitabh Thakur who could not hide his anger tweeted openly on Thursday night that Vikas Dubey may probably try to escape from police custody and end up being shot dead.
This tweet proved prophetic as gangster Vikas Dubey was shot dead near Kanpur when he allegedly tried to escape.
So today the Friday morning saved the police from that `big embarrassment’.
Many questions now would be raised about the killing. According to police, the incident occurred at Bhauti police station on the National Highway – 2 when Vikas was being brought by STF from Ujjjain.
The spot of the encounter was 25 kilometres from the Kanpur toll Plaza. “Vikas tried to escape after snatching firearms from security personnel and police opened fire.
[splco_spacer] 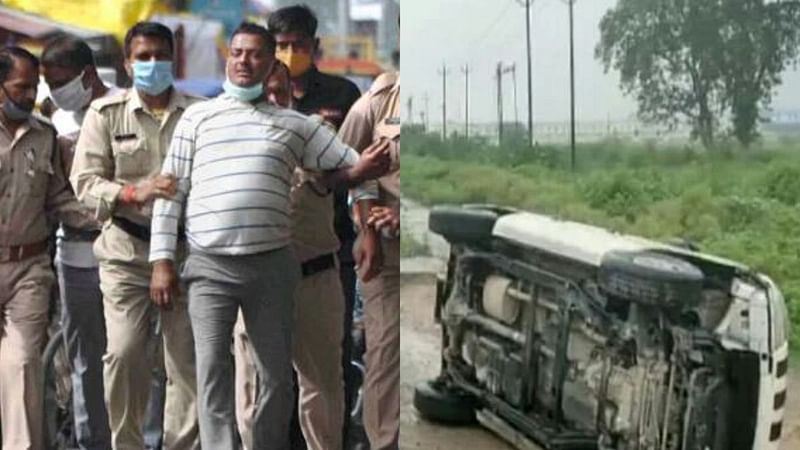 [splco_spacer]
He was critically injured and doctors in the hospital declared him brought dead,” police said.
A service pistol was found lying at the spot which was allegedly snatched from the police and was fired by the criminal.
The questions raised are whether a man who has a steel rod in his leg could have ‘run’ and two, why would a person who surrendered in a temple complex and got his pictures clicked snatch a firearm and try to escape from the trigger-happy police of Uttar Pradesh.
There are many questions that are unanswered in this encounter.
But the main question as the police trying to save ruling BJP bigwigs establishment political leaders who helped Dubey escape from Bikaru village in Kanpur on July 3 when he killed eight policemen and helped him for seven days before he surrendered in the temple ..
[splco_spacer]

Share via In a major jolt  to the BJP, Harish Chandra Meena, a sitting MP of the saffron party from Rajasthan, on Wednesday joined the Congress ahead of the assembly elections next month. Meena, an IPS officer-turned-parliamentarian, joined the Congress in the presence of former Rajasthan Chief Minister Ashok Gehlot, state Congress president Sachin Pilot Read More…

Share via Prime Minister Narendra Modi Monday accused West Bengal Chief Minister Mamata Banerjee of pursuing “cheap politics” over cyclone Fani, claiming that she did not speak to him when he tried to contact her to talk about the calamity.   This led to a typically acidic reply from Mamata Banerjee who said that the Read More…

Share via According to Kudiyanmala police at Kannur district in Kerala 2 children, who are also relatives and one of them the son of a local RSS functionary, were seriously injured when a country-made bomb, apparently stocked there, exploded .   During a raid later in the house of Shibu, who is a taluk-level functionary Read More…