Skip to content
Share via
News agency IANS claimed that in a shocking incident on Sunday, a woman threw all  her five children into the Ganga river in Jeghangirabad in Uttar Pradesh’s Bhadohi district. 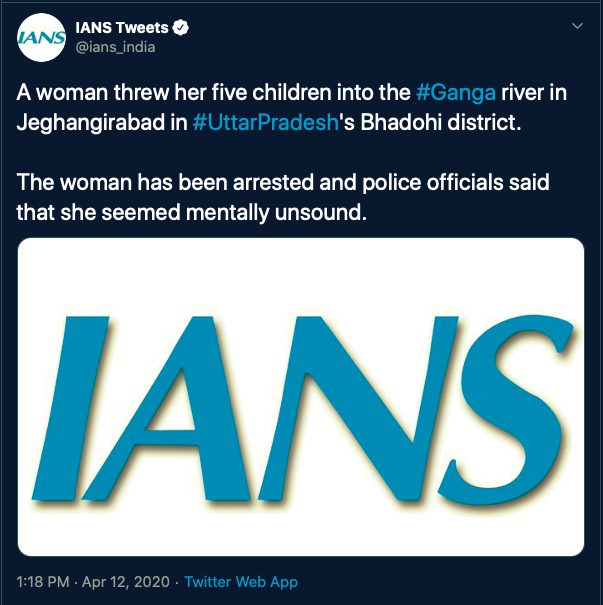 Indian PM Modi’s six  Hours Short  Sudden notice of 21 days lockdown that  has crippled the life of millions of daily labours in India . In India it is reported approx 450 million people are under  below poverty line who has to earn their bread on daily basics .
This startled incident  witness that Modi Led BJP Center Government relief packages failed to yield any  desired result  claims Social media netizens . Also Yogi led BJP Party Government in Uttar Pradesh announced relief package  but that has also not reached common people in Uttar Pradesh  complaints State  opposition parties.
Also Read : In Gujarat 10 Women Clerks Been Stripped For Medical Test
Local media Sources, meanwhile, said that the woman had earlier said that she and her children were not getting food in the lockdown and money inflow had stopped because she was a daily wage earner.
As soon as the police were informed, senior police officials reached the spot and divers were pressed into service to locate the children.
The woman has been arrested and police officials said that she seemed mentally unsound.
[splco_quote]“Our priority is to rescue the children as soon as possible, We will carry out other investigations later,” said Jeghangirabad local police official.[/splco_quote]

Share via This year’s celebrations marked the last big public event before the country heads for the national election due by May.   The Republic Day parade, which saw South African President Cyril Ramaphosa as the chief guest, first lady of SA Tshepo Motsepe, President of the country Ramnath Kovind, Prime Minister Narendra Modi, Congress Read More…