Skip to content
Share via
A ceremonial session of Congress to formally declare President-elect Joe Biden’s victory devolved in an instant into a scene of violence and mayhem in the Capitol on Wednesday (Jan 6) when a pro-Trump mob stormed the building, halting the counting of electoral votes.
Joe Biden was formally recognised by Congress as the next US president early on Thursday (Jan 7), ending two months of failed challenges by his predecessor, Mr Donald Trump, that exploded into violence at the US Capitol as lawmakers met to ratify the election result.
The Democratic President-elect’s victory was sealed after House and Senate members fended off a final round of objections to the Nov 3 election outcome raised by a handful of Republicans on Mr Trump’s behalf.
President Trump on Thursday promised an orderly transition.
Journalists from The New York Times witnessed the scene. Here is how the chaos unfolded.
Not long after Senator Mitch McConnell of Kentucky, the Senate majority leader, warned his Republican colleagues that their efforts to overturn a US election would send its democracy into a “death spiral”, fear surged through the Senate chamber.
A large group of pro-Trump protesters who broke through barricades breached the building, and police whisked Vice-President Mike Pence off the dais and out of the chamber, as the shouts of the mob could be heard outside the door.
Above the Senate floor, inside the press gallery, reporters craned their necks to catch a glimpse of the mayhem outside.
Journalists were rushed into the Senate chamber, as staff aides shouted “In or out!” and scrambled to secure the doors against intruders. Senator Todd Young of Indiana yelled for the doors to be locked.
Looking at her phone, Senator Amy Klobuchar of Minnesota alerted fellow senators to the escalating danger and shouted out that there were “shots fired” somewhere in the melee. Panic tinged the voices of both lawmakers and journalists.
Some Senate aides barred the doors of their offices as protesters beat on them, shouting profanities. As it became clear that the Senate chamber was not safe, security officers ordered the senators to leave. 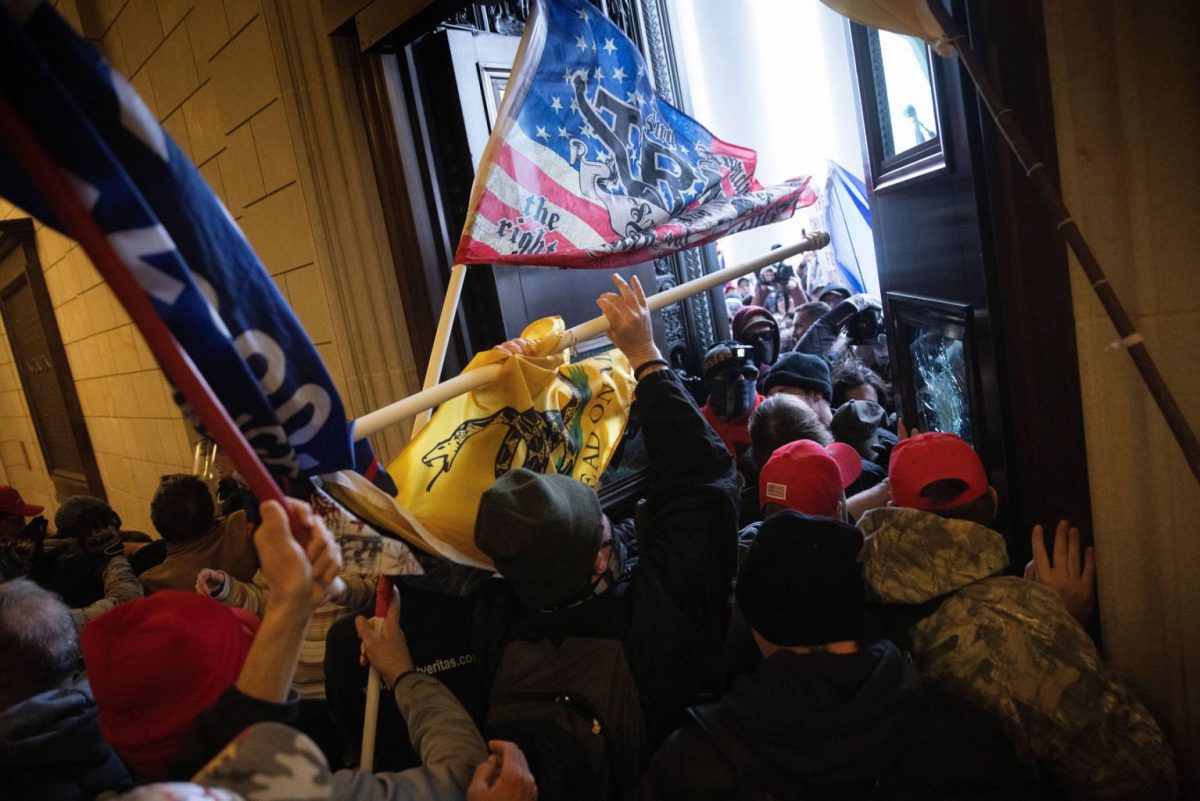 As lawmakers and staff rushed out, aides grabbed hold of the boxes containing the Electoral College certificates, making sure that the vandals could not literally steal the results of the election.
“If our capable floor staff hadn’t grabbed them, they would have been burnt by the mob,” said Senator Jeff Merkley of Oregon.
Through the tunnels of the Capitol, senators walked quickly with an armed police escort. A member of Mr McConnell’s security detail took the arm of the senator, who walks with a limp because of a childhood bout with polio, pulling and steadying him as they hustled away from danger through a tunnel under the Capitol complex.
Before long, the president’s supporters were inside the Senate chamber, prowling amid the mahogany desks and even sitting on the marble dais where Mr Pence had been seated not long before.
Across the Capitol, a police officer stepped onto the House rostrum to inform lawmakers that they might need to duck under their chairs.
“We now have individuals that have breached the Capitol building,” he told them, warning House members to be prepared to move quickly out of the chamber. “They are in the Rotunda.”
“Call Trump,” Representative Steve Cohen of Tennessee yelled to shouts and grumbles from the House floor. “Call your friend.”
Representative Ruben Gallego of Arizona, a veteran, jumped on the arm rests of chairs and began directing members, cautioning them to move calmly and quickly out of the chamber.
Capitol Police officers passed out gas masks to reporters in the press area above, as lawmakers pulled their own silver-boxed masks from underneath the chairs in front of them.
There were warnings that tear gas had been fired in the Capitol Rotunda, so they prepared to don the masks.
The chamber filled with frantic shouting and the whirring of the masks, their red lights flashing as lawmakers struggled to figure out how to unfold the plastic bags that were supposed to go over their heads.
Police officers and floor staff yelled for lawmakers to exit, clambering over chairs and banisters to reach the doors.
A wooden chest was pushed in front of the main doors to the chamber, through which Mr Pence and the chests of election certifications had come just an hour earlier.
Security officers drew their guns and pointed and yelled at the door, whose glass panels were shattered, as lawmakers, staff and reporters cowered in the top levels of the chamber.
There was a bang, and evacuation momentarily stopped. Everyone was told to get down, with reporters and lawmakers struggling to hide behind low-backed chairs and equipment normally used to broadcast the floor proceedings.
Outside, members of the mob were making themselves at home throughout the Capitol, including inside House Speaker Nancy Pelosi’s office.
Members of the US Congress run for cover as protesters try to enter the House Chamber in the Capitol on Jan 6, 2021.
Shortly after 2.45pm Washington time, the evacuation resumed, with a line of lawmakers and journalists clambering out of the House chamber.
They were climbing over chairs, ducking under banisters – anything to get out quickly. Police officers had their guns drawn.
“Are you OK? Are you OK?” was the constant refrain as the members of Congress, aides and reporters scurried down staircases and hallways.
Phones buzzed with texts and calls, with lawmakers frantically checking on staff that had been in office buildings and responding to family.
Senators gathered at a secure location in another building in the Capitol complex, with journalists asked to stay outside.
FBI tactical units in camouflage with firearms and shields monitored the location, as senators spoke in hushed tones about whether and how to proceed with the electoral count.
“These thugs are not running us off,” said Senator Joe Manchin III of West Virginia. “We’re going to finish tonight. Everyone is committed to staying whatever it takes to get our job done.”
As night fell, an announcement came over the loudspeaker in the Capitol telling lawmakers that the city was now under a curfew. Distant sirens could still be heard blaring throughout the capital.
Input Feed & Pictures : Syndicate Agency

Share via As per the data released by the Defense Security Cooperation Agency (DSCA), the jump in the sale of American weapons to India comes at a time when sale of weapons from the US to other countries has dipped to USD 50.8 billion in 2020 from USD 55.7 billion in 2019. India’s weapons procurement Read More…

Share via [splco_heading size=”15″ align=”left” margin=”30″]The announcement of remdesivir being a possible drug treatment against the deadly virus follows closely on research published in the Journal of Biological Chemistry, with scientists at the University of Alberta showing the drug is highly effective in stopping the replication mechanism of COVID-19.[/splco_heading]   Chair of medical microbiology and Read More…

Share via Trump has touted the drug as a “game changer” for Covid-19 and said hydroxychloroquine shows “tremendous promise.”   Physicians have warned that while Trump is enthusiastic about the drug, it still needs to be studied to see if it works and if it’s safe.   Trump trade adviser Peter Navarro championed hydroxychloroquine in Read More…