Skip to content
A senior official from Tasmac, told media , that the hologram labels will have QR Code of a minimum size of 8mm x 8mm printed at minimum 600 DPI resolution on both ends, which could be easily readable through mobile phone, 2D bar code scanner and hand-held devices.
While the Commissionerate of Prohibition and Excise in the State had introduced the system of fixing holograms on liquor bottles manufactured in distilleries and imported from outside in 2004 to prevent evasion of duty by distillery owners, the bottles came with outdated holograms that could easily be tampered with.
The Excise Department move came against the backdrop of the proliferation of local illegal liquor manufacturers, who produce the liquor under authorised company brands.
“Therefore, even consumers could scan the bar code provided in the bottle and get all the information including company name, manufacturing date and government’s authenticate certificate,” he said, adding hologram stickers add value to products and protect the brand identity at all levels. 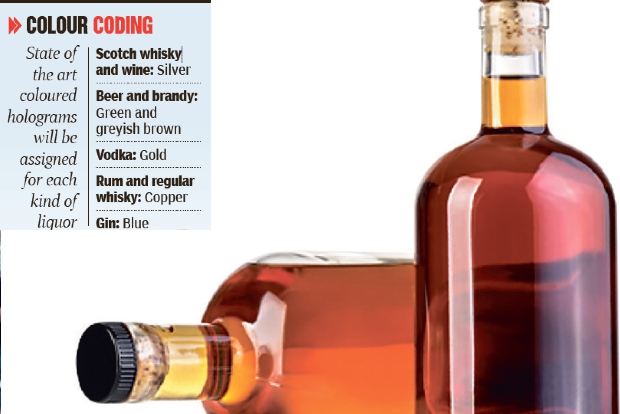 Stating that the holograms, which will be in their state-of-art format, will also be equipped with a tracking facility, the official added that authorities could hence ascertain the movement of the liquor stock and also the timing of transportation of the goods.
“The shelf life of the hologram will be for a minimum of three years without any deformation or deterioration in normal atmospheric conditions,” he added.
Pointing out that implementing the 3-D hologram with features in the liquor bottle was discussed in several meetings and worked upon for about three months, he said a company would soon be selected to manufacture and supply the holograms perhaps from December.

[splco_heading size=”15″ align=”left” margin=”30″]Having witnessed the hysteria sort of crowds defying the physical distancing norms and record high sales of liquor shops in Delhi, Maharastra Andhra and in Karnataka , the Chhattisgarh government has coined a novel way and launched a web portal for home delivery of liquor in green zones of the state to Read More…

The death toll in the moonshine tragedy in Uttar Pradesh and Uttarakhand rose to 97 on Sunday even as 215 people were arrested in a sweeping police crackdown on illicit liquor in Uttar Pradesh, officials said.   Simultaneously, as the Samajwadi Party (SP) and the Bahujan Samaj Party (BSP) blamed the ruling BJP in both Read More…

The Centre government proposes to raise Rs 1.05 lakh crore from stake sale in the current financial year.   BJP led Modi government has recently withdrew 1.7 lakhs crores from Reseve Bank of India and also in the process of for a series of blockbuster divestments ining up strategic sales in four blue-chip, state-run companies Read More…