Skip to content
Share via
Following a complaint raised due to S.Ve. Shekher’s alleged comments against the National Flag, the City police on August 13 had registered a case for an offence under Sec. 2 of the Prevention of Insult to National Honour Act, against S.Ve.Shekher.
As per the complaint, Shekher had uttered offensive remarks about the National Flag and Chief Minister Edappadi K Palaniswami in a video that he had uploaded on social media.
[splco_spacer]
Actor and BJP functionary S.Ve. Shekher, who feared arrest at the hands of the Central Crime Branch police for his alleged utterances against the National Flag, had moved the Madras High Court seeking advance bail.
[splco_spacer] 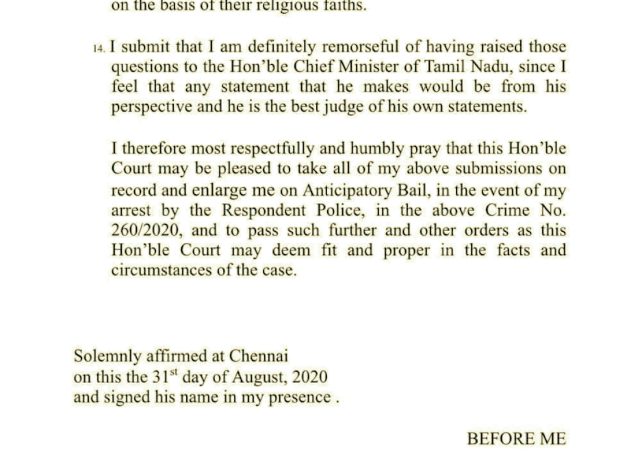 [splco_spacer]
The video which was released by S.Ve. Shekher, to criticise Chief Minister Edappadi K Palaniswami for his condemnation of an incident where a saffron cloth was put on the statue of the late chief minister and AIADMK founder MG Ramachandran.
S.Ve. Shekher had claimed that the colours of the national flag were representative of different religions – saffron denoted Hindus, white Christians and green Muslims, in the video and went on further asking if the saffron on the national flag that he was to hoist on Independence Day was a disgrace.
Following this, a complaint was lodged against him for insulting the tricolour and a case was booked under Prevention of Insults to National Honour Act, 1971.
Earlier, the government had informed the Madras HC that it had no objection in granting anticipatory bail to S.Ve. Shekher, if the latter seeks apologies for his comment on the National Flag and that the same would not be repeated in future.
Accordingly, the actor had filed a plea in Madras HC and sought apology for his alleged comments also ensuring that no such comments derogating the National Flag would be made by him in the near future. Meanwhile, the hearing for his bail plea was adjourned to September 7.
The court had earlier directed the police not to arrest him until further orders.

Share via The body of the missing MiG-29 pilot Commander Nishant Singh was found on Monday.   Indian Navy officials Commander Singh had gone missing on November 26 after his MiG-29K trainer aircraft crashed into the Arabian Sea. After intensive search Rescue teams were able to rescue the other pilot onboard.   The Russian-origin twin-seat Read More…

Share via Swedish telecom equipment company Ericsson was to get the payment from  the business transactions it had done with the embattled Anil Ambani group that has debt running up to Rs 45,000 crore. Ericsson had earlier agreed to scale down its dues towards Ambani’s group from Rs 1,600 crore to Rs 550 crore as Read More…

Share via Kanchipuram District Collector Maheswari Ravikumar issued flood warning to 35 villages on Friday along Palar river as the inflow into the river has been increased to 20,000 cusecs so far. It is set to go up by another 20,000 cusecs in the due course.   In order to handle the crisis that may Read More…