Skip to content
Slamming Governor Bhagat Singh Koshyari without taking his name NCP Leader Sharat Pawar said that the farmers were planning to go to Raj Bhavan to submit a memorandum to him after today’s rally at Azad Maidan.
“However, now I am told he (Governor) has gone away to Goa… We have never had such a Governor in the state’s entire history…
He has time to meet Kangana, but our Kisan brothers who have come here from all over the state…”
Pawar said sharply while addressing a huge farmers’ rally at Azad Maidan.
The NCP leader said it was the “moral duty” of the Governor to at least remain and receive the people of the state who are the ‘annadaata’ (food-givers), but he did even show the courtesy to remain in Raj Bhavan to accept their memorandum.
Pawar’s acidic remarks came after he was informed that the Governor is not in the state and has reportedly gone to Goa, putting a question mark on the plans of the Samyukta Shetkari Kamgar Morcha leaders to submit the memorandum.
Earlier A sea of farmers from various Districts of Maharashtra are marching towards Mumbai to remind Modi Govt of false promises made to them earlier.
The farmers of Maharashtra  marched to the Governor’s residence in Mumbai on January 25th to express their frustration .
Thousands of farmers from all over Maharashtra who had gathered yesterday at Nashik and set off to march 180 km to Mumbai reached the city’s iconic Azad Maidan on Sunday evening for a protest against the farm laws on Monday.
Visuals from the city border and toll gates showed the farmers arriving in cars, jeeps, vans and trucks flying red flags.
Tens of Thousands of farmers from all over Maharashtra reach Mumbai for massive protest on Monday 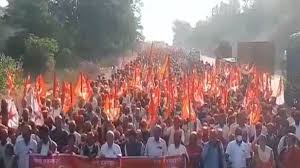 The state Congress unit, which is also a member of the ruling alliance, has also extended its support
It is to be noted Less than two weeks ago, Pawar had warned the Centre of “consequences” if it failed to understand the protesting farmers’ sentiments. Last month he had issued a similar warning and said the Centre should not test the farmers’ patience.
Splco Reporter
Special Correspondent Group of right thinking writers who eulogise self expression in quest of truth in news making jointly contribute under the platform of splco.me a novel social media channel.

General Motors stopped selling cars in India, the world’s second most populous nation, at the end of 2017 after years of low sales.   It sold one of its two factories in the country to China’s SAIC Motor Corp and continued to build vehicles for export at its second plant until Dec. 24.   An Read More…

Bharatiya Janata Party Saffron party has lost five out of the six seats it contested in the crucial polls. Elections for the Maharashtra Legislative Council was held on 1 December 2020. Aurangabad, Pune and Nagpur- Graduate constituencies, Pune and Amravati- Teachers constituencies and Dhule-Nandurbar – local body constituency had gone to the polls.   According Read More…

BJP’s Bhopal candidate and terrorist  accused Pragya Singh Thakur on Friday lashed out at former Mumbai Anti-Terrorist Squad chief Hemant Karkare who was martyred during the rejoice 26/11 Mumbai terror attack.   She said the IPS officer died because of his ‘Karma’ referring to his investigation which led to the arrest of Pragya and other Read More…