Skip to content
[splco_heading size=”15″ align=”left” margin=”30″]Congress leader Rahul Gandhi on Saturday said an economic storm faces India, and the Rs 20 trillion package of the government would fail to fire the country’s economic engine as it does not put money into the pockets of the people.  [/splco_heading]
[splco_spacer size=”30″]
He appealed to the prime minister to “reconsider” the package. He said the government should have put money directly into the pockets of farmers, migrant labourers and small businesses, but it is worried more about fiscal deficit and country’s credit ratings by international rating agencies.
Gandhi said any rating would be meaningless if Indian economy does not restart, and that can only happen if money is put into people’s pockets.
“It will be catastrophic if we do not. It will overshadow the (damage by the) disease,” Gandhi said.
Gandhi said his job as an opposition leader was to create pressure on the government, and that is what he is trying to do with his critique of the package.
He said hopefully the government would listen to the opposition, take corrective measures and put money into the hands of the people.
In his recent press conferences, Gandhi has spoken of providing constructive opposition, and that this was not the time for finger pointing.
“We are in the opposition and can choose to create pressure on the government either with hatred, or with warmth,” Gandhi said. He said his approach is the latter.
[splco_spacer size=”30″]

[splco_spacer size=”30″]
On Maharashtra’s handling of the crisis and whether he is putting pressure on that government as well, Gandhi said there is a difference between a Congress-run government and an alliance government.
He said he cannot put the kind of pressure on an alliance government that he can on a Congress government. He said Congress governments in states like Chhattisgarh have been aggressive in helping migrants, farmers and poor by putting money in their pockets.
However, he said all state governments, including those run by the Bharatiya Janata Party, have complained that the Centre is not providing them with enough funds. He said the strategy of the ntre should have been decentralized, to be a manager and let states be at the forefront of fighting this battle.
On the package, Gandhi said this was a time for the government to be like a mother to its people, to provide help and money to the hapless migrants walking hundreds of miles, and to the farmers.
Instead, the government has behaved like a moneylender by announcing credit, he said.
“Bharat Mata should not become a moneylender to its children. Our farmers do not need credit, they need money,” he said.
Gandhi asked the PM to reconsider the package, increase MNREGA work days to 200, adopt a minimum income scheme and transfer money directly into bank accounts of the poor.
[splco_spacer size=”30″] 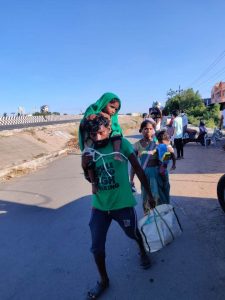 “I have heard the reason for not giving money to people is the government’s worry that an increased fiscal deficit would downgrade India’s ratings by international rating agencies,” he said.
Gandhi said he would suggest to the government to not pay heed to the ratings at the current juncture, which would be fine if India’s workers and farmers start working.
“Make policies with India in your mind, not what foreigners would think,” he said.
In a sudden development then Rahul Gandhi interacts with migrant workers near Sukhdev Vihar flyover Delhi. These workers were coming on foot from Ambala and going to Jhansi.
Now the police have detained these workers, saying they have orders ‘from the top’ to do so
Also Read : Why Modi Silent On Treating Migrant Workers Crisis : Opposition Questions Modi 8PM Speech
Splco Reporter
Special Correspondent Group of right thinking writers who eulogise self expression in quest of truth in news making jointly contribute under the platform of splco.me a novel social media channel.

Death toll rose to 82 after a magnitude 6.9 in richter scale  earthquake rocked the Indonesian island of Lombok and on nearby Bali on Sunday, damaging buildings, sending terrified residents and tourists running into the streets and triggering a brief tsunami warning. Social media posts from the scene showed debris piled on streets and sidewalks. Read More…

The Supreme Court on Wednesday said there is “no merit in charging interest on interest” for deferred loan payment instalments during the moratorium period announced in wake of the coronavirus (Covid-19) pandemic.   The apex court also asked the Central government to step up and take a stand over the issue related to charging interest Read More…

According to BMC, Mumbai city received 140.5 mm rain from 8 am on August 3 to 3 am on August 4. The Eastern and Western Suburbs recorded 84.77 mm and 79.27 mm of rainfall respectively. With continuous rainfall all through the night, people in several parts of Mumbai on Tuesday woke up to severe water Read More…