Skip to content
[splco_heading size=”15″ align=”left” margin=”30″]During last one week, more than 100 migrant workers have been killed across India in various accidents when the vehicles they are traveling in met with an accident.[/splco_heading]
The fifth  major incident over migrating workers took place on the national highway at Mihauli under Kotwali police circle when the trolley rammed into a stationary mini-truck.
“This horrible incident took place at around 3:30 am. Twenty-three people have died.
Around 20 people have been injured in the accident which took place at Auriya when a truck hit the stationary mini truck. The vehicles were carrying around 70 people.
[splco_spacer size=”30″] 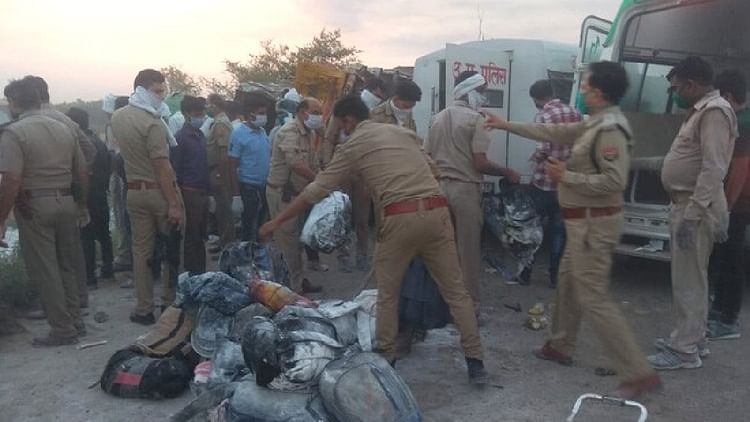 [splco_spacer size=”30″]
Most of them are migrant workers from the state of Bihar, Jharkhand and West Bengal and were coming from Delhi,” Abhishek Singh, the District magistrate of Auraiya, 230 km south-west of Lucknow said.
The DM said the mini-truck was standing near a dhaba when the truck hit it after ts driver lost control over the wheel.
The local villagers were the first to reach the accident site and started rescue. “The injured have been rushed to the hospital where the condition of several people is said to be critical,” he said.
Tens of thousands of people have been walking home from big cities after being laid off because of the lockdown to contain the spread of the coronavirus disease (Covid-19) since late March.
Some of them have hired trucks, or tempos to carry them home.
Indian government has started trains to bring the migrant labourers from states like Maharashtra and Gujarat to Uttar Pradesh and Bihar but thousands of migrant workers continue to seek rides on trucks, cycle, or just walk on the country’s highways in a struggle to return home.
Some of the workers do not have the documentation required to travel.
On May 8 at least 16 workers who were sleeping on rail track were run over by a goods train and early this week 15 migrant workers were killed in three different accidents.
On May 9, five workers were killed in Madhya Pradesh when the truck in which they were traveling hit the central verge of the road.
On may 14th eight labourers were killed and over 54 injured after their truck was hit by a speeding bus in Madhya Pradesh’s Guna on Thursday morning. They were travelling from Maharashtra to their hometown in Uttar Pradesh.
On the same day in other place In the other tragic incident from Uttar Pradesh, six migrant workers were run over by a state government bus on a highway in the Muzaffarnagar district on Wednesday night.
Also read : SC Accepts Govt Submission That Migrant Workers Walking On Their Own
Splco Reporter
Special Correspondent Group of right thinking writers who eulogise self expression in quest of truth in news making jointly contribute under the platform of splco.me a novel social media channel.

Ashok Gehlot will be Rajasthan’s next chief minister and Sachin Pilot the deputy chief minister, the Congress announced on Friday, not long after party chief Rahul Gandhi met both leaders.   “United colours of Rajasthan,” Rahul Gandhi said minutes after the meeting ended, tweeting a photo with Gehlot and Pilot with all three Congress Read More…

In a surprise move Tamil Nadu government led by DMK party to go for global tender to source Covid vaccine   A decision to this effect was taken at the meeting chaired by Chief Minister M.K. Stalin in which several ministers and officials participated. Tamilnadu has a population of 7.5 Crores people . But as Read More…