Skip to content
More trouble emanated for BJP led Modi government after India,s Opposition politicians on Sunday demanded a probe of WhatsApp chats of Arnab Goswami, editor-in-chief of Republic TV, and Partho Dasgupta, former chief executive officer of the TV audience measurement agency Broadcast Audience Research Council (BARC)
The 500 pages Mumbai police proof given chat after it leaked created furore in Social  media with #arnabgate #arrestarnabgoswami hashtags ruled in top trending
The chats form part of Mumbai police’s 3,600-page supplementary charge sheet in a recent scandal over alleged manipulation of TV ratings.
Three days before the February 26, 2019 IAF strike on a Jaish-e-Mohammed camp in Balakot, in reprisal for the February 14, 2019, Pulwama terrorist attack that left 40 Central Reserve Police Force (CRPF) troopers dead, Goswami allegedly said in one of the chats that “something big will happen”, indicating he knew about the military action before it took place.
The over 500-page transcript of WhatsApp conversations between Goswami and Dasgupta sparked allegations of collusion and alleged access the TV news anchor had to classified information.
In the chat Arnab makes remarks he had advance knowledge of the Indian Air Force strike on a terrorist camp in Pakistan’s Balakot.
The latest salvo against Goswami came from Congress party MP Manish Tewari, who said a joint parliamentary committee should take up the issue as the government and the Bharatiya Janata Party (BJP) remained silent.
“If what sections of Media is reporting is correct then it points towards a direct linkage between Balakot air strikes and 2019 General elections.
Was National Security milked for electoral purposes ? Needs a JPC investigation,” Tewari wrote on Twitter.
Trinamool Congress MP Mahua Moitra raised the issue. “Nation Needs to Know: Transcript of WhatsApp chats shows clearly Government gave prior information about both Balakot strikes & abolishing Article 370 to TV anchor,” she tweeted.
“What is going on? Am I the only one who thinks ModiShah owe us answers?”
“The Congress party must demand answers from the BJP,” many Congress party leaders MPs demand “This is not the time to soft-pedal the issue.” they allege
Senior party leader such as Jairam Ramesh, Jitendra Singh, Abhishek Manu Singhvi and Chidambaram posted public comments on the issue on Saturday.
“Arnab’s chats dated 23.02.2019 refer to sharing of Intel reaction along the Pak border.
It means someone very senior in Govt is leaking highly confidential info which may endanger the lives of our soldiers & so that mercenary considerations can add to TRPs (Television Rating Points),” Singhvi said.
Ramesh added that BARC was aiding “weapons of mass disinformation”.
“Since 1967 BARC has stood for Bhabha Atomic Research Centre. Thanks to Arnab Goswami another self-styled BARC —Broadcast Audience Research Council is in news now.
The first BARC built a strong & scientific India. The other BARC is aiding & abetting weapons of mass disinformation,” he posted on Twitter. 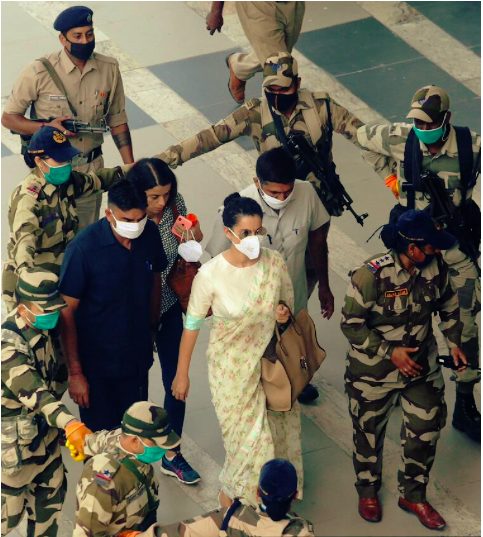 From the 500 WhatsApp  chats that is freely now available in social medias any reader  can easily  imbibe :

Arnab knew about Balakot air strike before it happened.

Arnab rejoiced after Pulwama: “This attack we have won like crazy”

Arnab tells the BARC head that “all ministers are with us”

Arnab says that Indian PM Modi’s aide Nripendra Mishra is “out of the system, sacked”

Arnab is asked by BARC head: ‘Can you help by telling AS to tell TRAI to pipe down on BARC’

Arnab claims Bollywood actress Kangana has “eroto mania” and was “sexually possessed” of Hrithik Roshan . It is to be noted  it is Kangana who openly support BJP and its parent organisation RSS and vehement attack Shivsena Government in Maharastra and therefor  been provided with heavily expensive Y security  by BJP led Modi government in India

Not only even after 21 Opposition parties in India scaled down from their earlier demand of 50% to 25% .,  EC adamant and aggressive stand not to count more than 2% of VVPATs in the coming Lok Sabha 2019  elections but also  Shifting of EVMs from Coimbatore had stirred controversy on Tuesday night after Opposition Read More…

India country’s exports declined marginally by 0.8 per cent to USD 26.89 billion in December 2020, due to contraction in sectors like petroleum, leather and marine products, according to preliminary data released by the commerce ministry on Saturday.   The trade deficit in December also widened to USD 15.71 billion, as imports grew by 7.6 Read More…

India on sunday witnessed a hike in prices of petrol and diesel for the eighth consecutive day that resuted in furuore from different walks of life.   While the current crude oil prices at about $40 is similar to August 2004 level, yet consumers are paying a heavier bill,   During August 2004, when Crude Read More…