Skip to content
[splco_heading size=”15″ align=”left” margin=”30″]New Scams made  skeletons tumbling out of the ‘Gujarat model’ in what is turning into an embarrassment  for  Chief Minister Vijay Rupani led Gujarat government which has already been facing flak for its botched handling of Covid-19 and high mortality rate . As this report published date Gujarat is third  largest state of Corona virus affected patients in India Crossing 12000 persons during lockdown and with death rate  also recorded second highest state  crossing 700 people [/splco_heading]
[splco_label]What is a Ambu bag[/splco_label]
A bag valve mask (BVM), sometimes known by the proprietary name Ambu bag or generically as a manual resuscitator or “self-inflating bag”, is a hand-held device commonly used to provide positive pressure ventilation to patients who are not breathing or not breathing adequately.
[splco_label]What is a Ventilator[/splco_label]
A ventilator is a machine that provides mechanical ventilation by moving breathable air into and out of the lungs, to deliver breaths to a patient who is physically unable to breathe, or breathing insufficiently. Modern ventilators are computerized microprocessor-controlled machines, but patients can also be ventilated with a simple, hand-operated bag valve mask. Ventilators are chiefly used in intensive-care medicine, home care, and emergency medicine (as standalone units) and in anesthesiology (as a component of an anesthesia machine).
[splco_label]Can Ambu bags do the role of Ventilators[/splco_label]
Doctors affirmed NO certainly NOT
[splco_label]How to obtain License for Ventilators In India[/splco_label]
A top health official from the state government told, “According to the Act, ventilators fall under C and D category of medical devices for which licence is required from Drug Controller General of India. It therefore falls under the purview of Central government and not the state government.”
He added, “To obtain the licence, the performance trial of the ventilator needs to be conducted for which an ethical committee has to be constituted. The committee comprises director of a medical college/head of a hospital, subject expert, a lawyer, a social worker and expert doctors.” A chief investigator is required to make a presentation in front of the ethical committee specifying the date on which the trial will be held, the number of patients the trial will be conducted on, the medical conditions of the patients and provide letters of consent from the patients.
[splco_spacer size=”30″]
[splco_label]What BJP Ruled Gujarat Government did :[/splco_label]
Not only Called these mechanised ambu bags as ‘ventilators’ but also not bother to carry out performance trials of the equipment before installation, violating Medical Devices Rules, 2017.There was also no ethical committee formed as per the rules to carry out performance trial of these machines either, sources affirmed .
[splco_spacer size=”30″]
[splco_label]Where and how BJP government does scientific Scam:[/splco_label]
What is further shocking is that the trial of the machine was carried out on just ONE patient before installation of 900 machines across government hospitals including 230 at Ahmedabad Civil Hospital.
All medical devices follow a regulatory framework based on drug regulations under Drugs and Cosmetics Act (1940). But these regulations were clearly flouted and the ‘ventilators’ manufactured by a company run by CM Rupani’s friend were hurriedly installed in hospitals during a global pandemic that was fast claiming lives in Gujarat.
[splco_label]How to scam came in to Light[/splco_label]
Parakramsinh Jadeja, a friend of Chief Minister Vijay Rupani and CMD of Jyoti CNC whose team developed Dhaman-1 admitted that the machine did not have the DCGI licence and the performance trial was conducted only on one patient. Jadeja said, “We did not take the DCGI licence, but we did test the machine at a lab approved by National Accreditation Board of Laboratories for ISO 86101 and IEC60601. We are following central guidelines.” Asked if performance trial of the machine was conducted on patients and if yes, on how many, he said, “We carried out performance trial of the machine on one patient in front of the ethical committee at Ahmedabad Civil Hospital.”
However, sources said the committee comprised an anaesthetist and Dr Kamlesh Upadhyay who is a professor of medicine and not a critical care expert. The inefficacy of the machines in the treatment of Covid-19 patients came to light after doctors at Ahmedabad Civil Hospital sought more ventilators from the government inspite of having 230 Dhaman-1 machines.
[splco_label]How Gujarat Government defend the scam Charges[/splco_label]

Jayanti Ravi, Principal Secretary Health and Family Welfare, respond “At a time there’s shortage of ventilators world over, including India, Jyoti CNC took initiative and fabricated the devices. With their help, the government received donation of 1,000 ventilators. Their ventilators have been approved by Electronics & Quality Development Centre (EQDC) of the Gujarat government and Civil Hospital doctors following which they were installed. Their technicians trained biomedical engineers about using its various features.

“Accessories like high-flow nasal cannula, a circuit with it, humidifi er and fl ow meter are under process of acquisition to add to the ventilators. It is a matter of pride for Gujarat that the company came up with it. It is in talks with other states and central government for supply of ventilators.”
[splco_label]What Local media in Gujarat Say :[/splco_label]
The makers of these fake ventilators, who gave a demo of the equipment at Ahmedabad Civil Hospital on Monday, admitted these are not ventilators though Gujarat government has been promoting these as ventilators in its press releases. In fact, the medical experts who attended the demonstration said these machines should include humidifier, condenser and a mask as well.
[splco_spacer size=”30″] 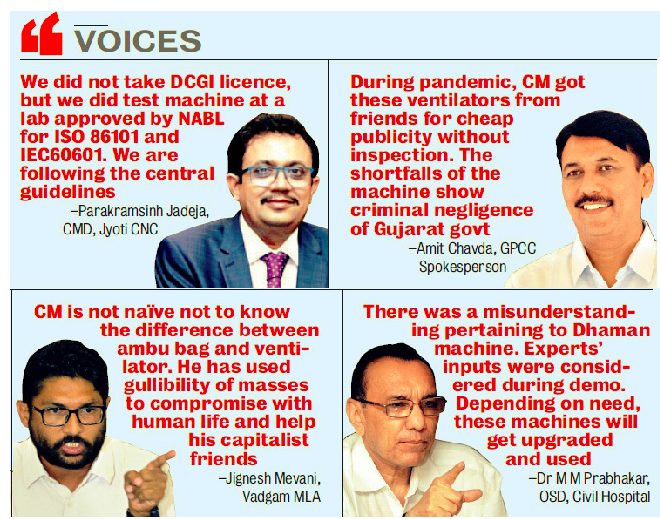 [splco_spacer size=”30″]
Local media Ahamedbad Mirror representative Vipul Rajput who was present at the demo for the doctors also asked Parakramsinh Jadeja, the CMD of Jyoti CNC, about the performance trials of the ‘ventilator’ but before he could answer, the Dr M M Prabhakar, Officer on Special Duty at Ahmedabad Civil Hospital, snatched the mike from him and digressed.
The fake ventilator scam is now getting murkier. On Monday, Ahmedabad Mirror’s report revealed that the 900 machines fitted at several government hospitals in Gujarat for Covid-19 patients by Gujarat CM’s friend from Rajkot were not exactly ventilators despite the CM calling it so.
So Question your Splco on behalf of its 0.5 million plus  readers ask Gujarat CM and tagged him also  in his Twitter Id  ..
1) When the makers of these machines ( medicos claim this is an advanced version of a Ambu bag) , who gave a demo of the equipment at Ahmedabad Civil Hospital on Monday, admitted these are not ventilators . But then Why Gujarat government has been promoting these as ventilators in its press releases.
[splco_spacer size=”30″]
[splco_spacer size=”30″]
2) In fact, the medical experts who attended the demonstration said these machines should include humidifier, condenser and a mask as well. being the case How can a government unwanted boast by way of umpteen release of infrastructure for corona treatment advertisements thus meddle  with the life of Gujrati people  at the time of coronavirus epidemic
[splco_spacer size=”30″]
3) Social Medias and local sources admit across Gujarat many commotions of migrant workers been suppressed and also the actual Corona patients figure .. Under this scenario 3 decades Gujarat been by  Ruled by BJP and its governance  does not warrant  more transparent Third party Inspection of its Corona virus Management
Read More : Medicos Forum Seeks Gujarat CM Apology For Separate Wards For Corona Patients
Splco Special Correspondent
News analysis wing of Splco Media a bilingual (English & Tamil) novel social media channel.

While she was taking a bath in the River Ganga during a religious ritual on Monday, 45-year-old woman was gangraped in Barh police station area in rural Patna district of Bihar , police said on Wednesday. Officials said two men, including the person who captured the crime on video and later shared it on social Read More…

Alleging that Prime Minister Narendra Modi was “compelling” his officers to send notices for “humiliating opposition political leaders”, West Bengal Chief Minister Mamata Banerjee on Friday said she had no problem if the authorities choose to arrest her.   “I have opposed the (interim) Budget. I have said a few words before you. For this Read More…