Skip to content
Share via
Andhra Pradesh chief minister YS Jagan Mohan Reddy on Monday indicated that LG Polymers plant at Visakhapatnam will not be allowed to function as it used to in the past even as he maintained that culprits responsible for the gas leak will be booked.
As many as 12 people were killed when styrene vapours leaked from the LG Polymers plant on May 7, while several hundred fell ill after inhaling the poisonous chemical at RR Venkatapuram near Visakhapatnam.
Speaking through video conference with officials and some of the victims, Reddy blamed the previous N Chandrababu Naidu-led government for allegedly according permission to the company for expansion.
“We will not spare anybody. Whoever is responsible for the incident, action will certainly be taken against them. Once we get reports from all the committees including those constituted by the centre, we will seek answers from the company. The answers will be examined by the experts,” Jagan said. 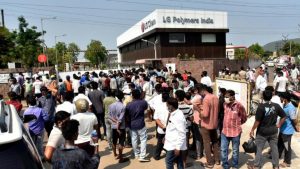 “Whatever action is recommended by the committees, those proceedings will be implemented transparently. We will not allow such a situation that the company will undertake the same activities at the same location in future. That is why that raw material Styrene has also been sent back,” Reddy said.
LP Polymers in a statement on Monday said it successfully completed the transportation of the Styrene Monomer (SM) inventory within the plant as well as in the styrene tanks that were at the port.
“There is now no Styrene Monomer left at the LG Polymers plant in Vizag. Additionally, in collaboration with related institutions, we are devoting our resources to analyse the cause of the accident, prevent re-occurrence, and most importantly provide assistance to the families of the deceased and injured,” authorities said.
“Our immediate focus is to provide assistance to the people in the local area to help them continue with their normal lives as soon as possible,” Jeong Sunkey, Managing Director of LG Polymers, said.
There had been an unequivocal demand from people of Venkatapuram and surrounding villages that the plant be completely shutdown as it posed a threat to their lives.
The state government has announced Rs one crore to the kin of the deceased as ex-gratia and different packages to victims depending on the severity of ailments.
Read more : Lessons Learnt From Vizah Gas Leaks Made NDMA Issue New Guidelines

Share via   The maximum impact could be for West Bengal and Bangladesh coasts, as the storm approaches these regions.   Indian Meteorological Department (IMD) has said that over the next 12 hours, it will further intensify into a severe cyclonic storm.   The cyclonic system is centered around 1100 km south of Paradip off Read More…

Share via Andhra Pradesh Chief Minister N. Chandrababu Naidu has put his main rival, the YSR Congress, on the defensive by announcing doubling of the state pension amount from January 1, 2019.   The YSRC has been in a jubilant mood after its party chief Y.S. Jagan Mohan Reddy’s successful completion of his almost year-long Read More…

Share via The curse of honour killing in the name of caste claimed another life on Friday when a Dalit man was hacked to death in broad daylight in front of his seven-month pregnant wife and his mother, at Miryalaguda in Nalgonda district on Friday. The victim, P. Pranay Kumar, 24, had married  Amrutha Varshini Read More…