With continuous rainfall all through the night, people in several parts of Mumbai on Tuesday woke up to severe water logging.
The weather department has sounded a red alert for today and tomorrow for extremely heavy rain in Mumbai.
In view of the rainfall situation and the heavy rains forecast, the Brihanmumbai Municipal Corporation (BMC) has announced that all offices and other establishments will remain closed today, except for emergency services.
With a high tide expected at 12:47 pm, the Brihanmumbai Municipal Corporation (BMC) has issued an alert to all concerned departments and also to citizens to not go near any beach or low lying areas.
Tides waves of around 4.51 meters have been predicted due to the heavy rains.
[splco_spacer] 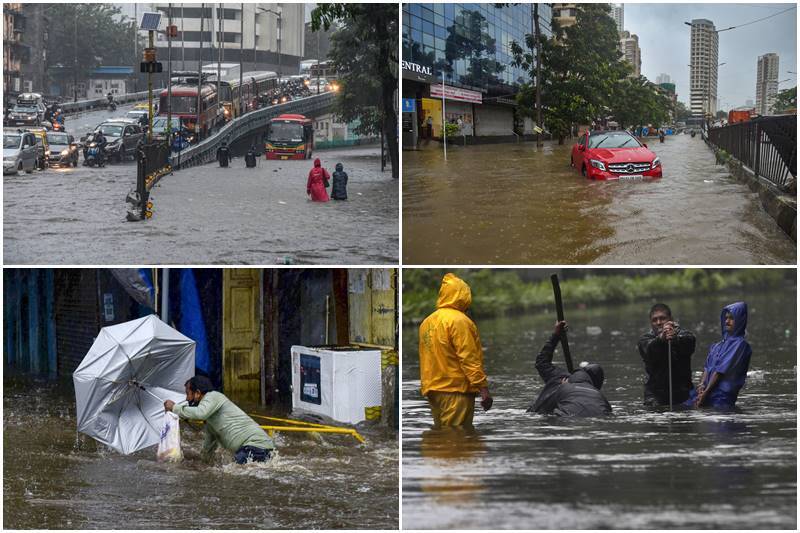 [splco_spacer]
BMC issued suitable warnings and advisories to all coastal security agencies, disaster management department and Brihanmumbai Electric Supply and Transport (BEST).
The Central Line s running slowly. Rail traffic on the Harbour line has stopped between Kurla- CSMT, while traffic on all four lines has stopped, due to the heavy rainfall.
Due to high tide and heavy rains resulting in water logging at Dadar and Prabhadevi, special suburban services are being run between Virar-Andheri-Bandra and suspended between Bandra – Churchgate

BEST bus services have been diverted on at least eight routes in various parts of Mumbai city and suburbs.
The city corporation has also put on alert fire brigade, pumping stations, and operating staff at temporarily installed 299 pumping machines.
Officers have also been put on alert in case evacuation is required when the water level of the Mithi river increases due to rains.
Education officers have been told to keep the BMC schools prepared if any emergency situation arises and people need shelter.
The IMD said that extremely heavy rain will occur at isolated places in Mumbai, Thane, and Raigad districts of Maharashtra on August 4 and August 5.
Weather forecast predicted Ratnagiri district is also expected to receive extremely heavy rain on August 4, while Paldhar district is expected to receive extremely heavy rain on August 5.

Share via According to International agency Reuters Thirteen provinces, mostly in the country’s north, had been affected by floods, according to the Ministry for Disaster Management.   In Parwan, just north of the capital Kabul, 116 people had been killed and more than 120 injured, with 15 people still missing, national and local officials said. Read More…

Share via Cotton growing Gujarat has so far received 27 percent less rainfall than normal, while rice growing West Bengal, Jharkhand and Bihar in eastern India saw it drop by as much as 25 percent below average, IMD data shows. India, the world’s biggest producer of cotton and pulses and the second-biggest producer of sugar Read More…

Share via Rough to very rough sea conditions are also likely in the west-central and south-western Arabian sea, and fishermen have been advised not to venture into these areas, warned IMD. Arriving  fresh surge of the westerly winds will intensify the monsoons in Kerala, Karnataka and the ghat areas of Tamil Nadu over 48 hours Read More…