BJP IT Cell Head Amit Malviya is trained by RSS and deputed in to BJP and he posted an edited clip from the ongoing farmers’ protest on micro-blogging platform Twitter.

He quote tweeting a post made by Congress leader Rahul Gandhi. He had shared a video titled ‘Propaganda vs Reality’ in response to Rahul Gandhi’s post who had shared a PTI photograph showing a security personnel about to hit a farmer with a baton.
But after verification of this  social media platform on Wednesday added a “manipulated media” label to Malviya’s tweet.

Rahul Gandhi must be the most discredited opposition leader India has seen in a long long time. https://t.co/9wQeNE5xAP pic.twitter.com/b4HjXTHPSx

As per Twitter’s ‘Synthetic and manipulated media policy’, “You may not deceptively promote synthetic or manipulated media that are likely to cause harm. In addition, we may label Tweets containing synthetic and manipulated media to help people understand their authenticity and to provide additional context.”
“You should be able to find reliable information on Twitter. That means understanding whether the content you see is real or fabricated and having the ability to find more context about what you see on Twitter.
Therefore, we may label Tweets that include media (videos, audio, and images) that have been deceptively altered or fabricated. In addition, you may not share deceptively altered media on Twitter in ways that mislead or deceive people about the media’s authenticity where threats to physical safety or other serious harm may result,” it adds.
Earlier not once but many times BJP IT cell head  mis leaded his followers / readers  that been found totally wrong .. here comes a case where in Telegana election ..
Where While the numbers cited by Malviya are correct, the claim is misleading. This is because while the AIMIM had a vote share of 2.7%, the party had contested on merely 8 seats, of which it won 7. 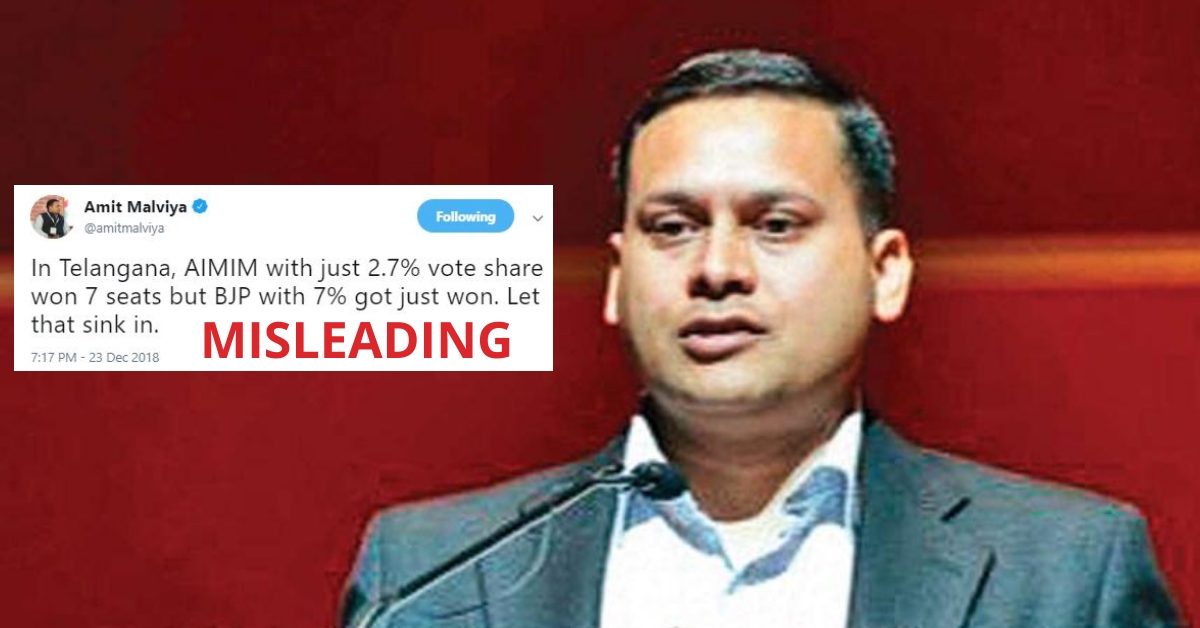 On the other hand, BJP had contested 118 out of 119 seats in the state assembly. AIMIM thus has a far superior strike rate of 87.5 percent (7 out of 8) in comparison to the BJP’s dismal strike rate of 0.85 percent (1 out of 118). The complete details are available on the website of the Election Commission.

Share via When entire India is fighting against deadly virus Corona , Gujarat police, upon the complaint of retired army jawan Jaydev Joshi in Rajkot, have filed an FIR against lawyer and activist Prashant Bhushan ‘hurting religious sentiments’   “As crores starve & walk hundreds of miles home due to forced lockdown, our heartless ministers Read More…

Share via Bharatiya Janata Party MLA from Uttar Pradesh’s Deoria district kicked off a political ruckus  when he suggested to people of his constituency not to buy vegetables from Muslim vendors to avoid contracting the coronavirus infection.   In a video, now gone viral, Suresh Tiwari is seen appealing to people: “You all should keep Read More…

Share via Four police personnel were suspended and a poll official was issued show cause notice in Bihar’s Muzaffarpur district on Tuesday for keeping six EVMs inside a hotel room while voting was on for the fifth phase, a top official said.   The matter came to light when several local leaders of the opposition Read More…