Skip to content
Australian Prime Minister Scott Morrison on Thursday announced the suspension of Australia’s extradition treaty with Hong Kong over the controversial Chinese national security law imposed there and offered visas to 10,000 students and temporary skilled workers from the former British territory to start a new life in this country.
“Our decision to suspend the extradition agreement with Hong Kong represents an acknowledgement of the fundamental change of circumstances in relation to Hong Kong because of the new security law, which in our view undermines the ‘one country, two systems’ framework, and Hong Kong’s own basic law and the high degree of autonomy guaranteed in the Sino-British Joint Declaration that was set out there,” Morrison said in Canberra.
He said the Australian government will also extend Hong Kong-based businesses to relocate to the country and prioritise highly skilled applicants through existing streams from the Chinese territory.
”As a result of the changes that have occurred in Hong Kong, that there will be citizens of Hong Kong who may be looking to move elsewhere, to start a new life somewhere else, to take their skills, their businesses and things that they have been running under the previous set of rules and arrangements in Hong Kong, and seek that opportunity elsewhere, he said.
[splco_spacer] 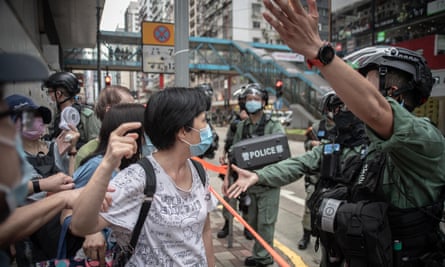 [splco_spacer]
”We are committed to ensuring this is further strengthened. That’s why Australia will introduce new measures for students, temporary graduates and skilled workers from Hong Kong who want to live, work and study in Australia,” he said.
Morrison said the new visa arrangements will provide further opportunities for Hong Kong passport holders to remain in Australia, with pathways to permanent residency.
”There are almost 10,000 existing temporary skilled, temporary graduate and student visa holders in Australia who will be eligible for these special arrangements, with a further 2,500 outside Australia and 1,250 applications on hand,” Morrison added.
He also said former students already on a temporary graduate visa will be eligible for an extension of five years effective Thursday.
Morrison move came after Chinese President Xi Jinping last month signed a controversial legislation to impose a national security law in Hong Kong that allowed Beijing to crackdown against dissent, criminalising sedition and curtailing protests with punishments up to life in prison.
The new national security law imposed last week following violent anti-government protests in Hong Kong in 2019 makes secessionist, subversive, or terrorist activities illegal, as well as foreign intervention in the city’s internal affairs.
Hong Kong is governed under the principle of “one country, two systems”, under which China has agreed to give the region a high degree of autonomy and to preserve its economic and social systems for 50 years from the date of the handover.
The former British colony became a special administrative region of China on July 1, 1997, when Britain’s 99-year lease of the New Territories, north of Hong Kong island, expired.
[splco_spacer]

Thrice banned organisation in India for violence Rashtriya Swayamsevak Sangh (RSS) marks Vijay Dashmi as one of its biggest events when the RSS chief addresses the workers on a number of issues concerning politics, society, national security and family values Bhagwat also performed Shastrapuja, the Hindu tradition in which arms are worshipped annually in Dussehra Read More…

China poses the greatest long-term strategic threat in the 21st century, a top Pentagon commander apprised America lawmakers. He also  alleged  that Beijing’s very pernicious approach to the region includes a whole of party effort to coerce, corrupt and co-opt governments, businesses, organizations and the people of the Indo-Pacific.   “…the greatest long-term strategic threat Read More…

China-India relations continue to play blame game and both sides urge restraint in border stand-off   India said its troops had thwarted an incursion by Chinese troops, but China accused the other side of crossing the established lines of control.   India’s minister of external affairs Subrahmanyam Jaishankar is also slated to meet his Chinese Read More…