Veda Nilayam which is situated on an area of 0.55 acre of land, (around 10 grounds), will be converted into a memorial under the provisions of the Right to Fair Compensation and Transparency in Land Acquisition, Rehabilitation and Resettlement Act 2013.

Tamil Nadu Government deposited Rs 67.9 crore in the City Civil Court for the acquisition of former Chief Minister J Jayalalitha’s house, Veda Nilayam, in Poes Garden on Saturday.
Earlier, the Madras High Court had declared that the former Chief Minister’s Nephew Deepak and Niece Deepa as legal heirs and ordered the Government to pay the dues to them inorder to acquire it.
Accordingly, the deposited amount will be given to the legal heirs – niece and nephew of the late CM and the I-T Department would walk away with Rs 36.8 crore as income tax, wealth tax, penalties, and interest.
This means Supreme court convicted person then ADMK supremo and  then Cheif Minister J. Jayalalitha  for corruption and misappropriate income , and also convicted with income tax department for  penalty upto  Rs 37 crores towards misappropriate income  , but post  her demise now been cleared  by Her ADMK party ruled government in Tamilnadu using monies  not from ADMK party fund but from Tamilnadu  people tax money.
It is to be noted  Jayalalitha won over Principle opposition party DMK by a wafer thin margin of 0.4 % in 2016. In other words DMK alliance in 2016 lost 31 MLAs by 76385 votes .. 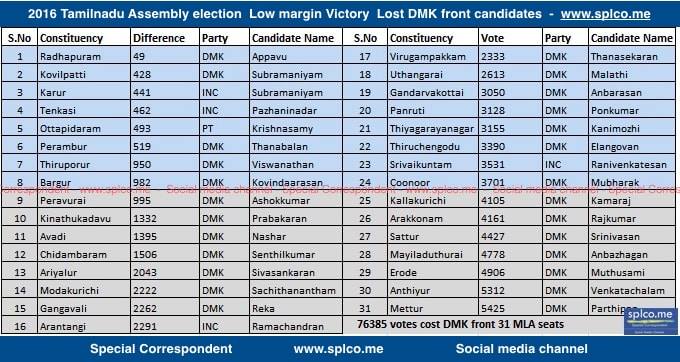 It is Same DMK that lost to ADMK by a margin of 0.4% in 2016  has now beat the very  same ADMK party by huge margin of  26% votes difference  and captured 39/40 seats in 2019 .
To explore further in  2019 her Party ADMK suffered a huge setback in Parliament by losing 39 seats if  that converted in to Assembly seats then that means  ADMK alliance  could only wrest 13 seat out of 234 Seats where as principle opposition DMK alliance has  captured 221 Seats out of 234 Seats
In this scenario huge setback of people mandate  it is important to note   ADMK government is spending tax payer money to settle Income tax penalty and gift the balance money to Jayalalitha and her family heirs .
With Tamilnadu government gift  deal from tax payer money this literally enable the legal heirs of Jayalalitha  that is family members can approach the court for compensation.
By this deposit of Rs  68 crores,  Tamilnadu Ruled by ADMK  government has ensured it cleared not only  Jayalalitha penalty post her demise and absolved her and also  ensured the family heirs  that is her elder brother’s son Dilip and daughter Deepa as major beneficiary to use balance  Rs 31.1 Crores

VVPAT Counting row : We should master technology and not to be its slave Naidu to EC

Share via Andhra Pradesh Chief Minister N Chandrababu Naidu Sunday said his technology advisor Hari Prasad Vemuru, whose presence in TDP’s delegation to the Election Commission was objected to by the poll panel, was a whistle-blower and not a thief.   “Yesterday we met the Chief Election Commissioner (CEC) and showed him how EVMs were Read More…

Share via B Stalin, president of the Peikulam Traders’ Association.“ has confirmed There is no doubt that the police personnel at Sathankulam police station thrashed both the father and son to death. The magisterial inquiry revealed a minimum of 80 wounds on their bodies,”   Other vendors alleged that the policemen had assaulted the two Read More…