Skip to content
Tamil Nadu police personnel pay tribute to legendary playback singer S P Balasubrahmanyam during his funeral at his farmhouse in Thamaraipakkam village near Chennai on Sept. 26, 2020.
S P Balasubrahmanyam , nicked as SPB to his admirers and fans call him fondly and he has made entry in the Tamil film industry happened with ‘Shanthi Nilayam’ and ‘Adimaippen’, both of which hit screens in 1969.
The 74-year old singer earned a variety of sobriquets from his fans like “Padum Nila,” (singing moon), “Isai Megam” (music cloud that showered songs), “Gaandha kuralon” (Man of a magnetic voice) for his mellifluous voice.
SPB’s first song was in the Telugu film “Sri Sri Sri Maryada Ramanna” (1967) and his debut song in Tamil “Athanodu Ippadi Irundhu” in a movie titled ‘Hotel Rambha’ never saw the light of the day.
Before becoming ill, he recorded a zestful opening song for the under production Rajinkanth starrer “Annatha,” a D Imman musical and it turned out be his last song in his career that spanned over five decades.
Bharathiraja said SPB has no death and continues to live through his songs.
Versatile singer S P Balasubrahmanyam hailed as the “singing moon” by his millions of fans was laid to rest at his farmhouse near here on Saturday with a 24-gun salute by the Tamil Nadu police.
After the singer’s son S P Charan performed the funeral rites amid chants by priests, the Last Post was played by a police band and 24 personnel in ceremonial attire gave a gun salute.
Later, the body with SPB’s glasses on and smeared with ‘Thiruneeru’ (sacred ashes) on the forehead and draped in zari dhoti was lowered into a deep pit and buried as chants of “SPB Pugazh Onguga” (Live long SPB’s fame) rent the air.
[splco_spacer] 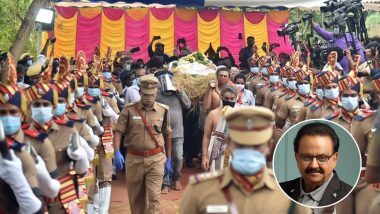 [splco_spacer]
Flower petals were showered on the body and crystal salt strewn around inside the pit before its closure.
With policemen, their rifles tucked under their arms marching along, the body was brought on a traditional hay-lined bier to the final resting place on the verdant premises from a ‘pandal’ earmarked for people to pay homage and perform rituals.
The farmhouse at Tamaraipakkam in Tiruvallur district teemed with his fans, well-wishers and celebrities for the funeral since early morning and 500 police personnel were deployed to regulate the crowd.
[splco_spacer]
Actor Vijay, an ardent fan of SP Balasubrahmanyam paid his last respects by attending the funeral. Vijay consoled SPB’s son S P Charan with folded hands and a hug.

According to the ministry, Gennova has developed an mRNA vaccine candidate (HGCO19) in collaboration with HDT Biotech Corporation, Seattle, USA. According to the ministry, the novel mRNA vaccine candidate, HGCO19, has all the necessary arsenal to guide the host cells to make the antigen spike protein of the virus, reported to interact with host cells Read More…

After taking parents opinion where 95%  overwhelmingly given opinion to conduct classes Tamil Nadu Government decided to open schools for Classes 10 and 12   from Jan 19 onwards    In a statement, Tamilnadu Chief Minister K Palaniswami said that schools were instructed to strictly follow Standard Operating Procedures (SOP) after the reopening of schools.   Read More…

The move to include Covaxin even before the publication of data from its phase 3 trial had come under criticism from some quarters.   However, the regulator had defended the decision by saying that both the vaccines were totally safe.   Over 500 adverse reactions were reported from across the country during two days of Read More…