Skip to content
Serum Institute Manjari facility in Pune is where the Covishield vaccine used in the nationwide inoculation drive against the pandemic is made.
The building where the fire broke out is part of the under-construction site of the Serum facility and Covishield production has not been affected by the fire, sources said.
So far Five charred bodies have been recovered from the fire that engulfed the Serum Institute of India building in Pune where COVID-19 vaccine is being made.
The five people who died, identified as the workers at the under-construction building. 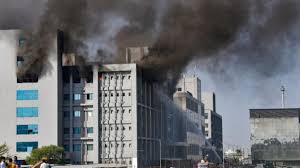 The cause of the fire is yet to be ascertained but it is being speculated that welding, that was going on at the building, could have caused the fire, Pune Mayor Murlidhar Mohol said to media
Earlier, four persons were evacuated from a building in the Serum Institute of India’s Manjari premises after a fire broke out on Thursday, police said.
There is no impact on the Covishield vaccine making process as the fire broke out in a facility away from the place where the anti-coronavirus vaccines are made, sources said.
Deputy Commissioner of Police Namrata Patil told PTI the fire broke out at 2.45 pm on the fourth and fifth floor of the SEZ 3 building in the Serum Institute premises.
“As per the primary information, three people have been evacuated,” she said.
Viral visuals from the site showed smoke billowing out from the Serum Institute facility.
“We have sent water tenders to the spot,” a fire brigade official said, adding the cause of the fire is yet to be ascertained.

Confirmed Sources revealed Reserve Bank of India is phasing out the Rs 2000 currency note if cues available in its annual report 2019-20, released on Tuesday, is and indication eye opener   The annual report said the Rs 2000 denomination note, introduced during demonetisation in 2016, was not printed at all during 2019-2020.   The Read More…

Justice Ranjan Gogoi, who on Wednesday sworn in as the 46th Chief Justice of India, is the first person from the Northeast to reach the top position of judiciary and will have a tenure of a little over 13 months before retiring on November 17, 2019. He succeeds Justice Dipak Misra who demitted office on Read More…