Skip to content
Share via
Rajasthan Chief Minister Ashok Gehlot accused the Bharatiya Janata Party of trying to de-stabilise the Rajasthan government. Gehlot alleged the party was offering MLAs rupees 10 to 15 crore to switch allegiance.
“We must focus on fighting coronavirus and that is what we are doing but they (BJP) are trying to de-stabilise the government. It wasn’t so during Vajpayee ji’s time but after 2014 there is pride and division on basis of religion,” said Rajasthan Chief Minister Ashok Gehlot
[splco_spacer] 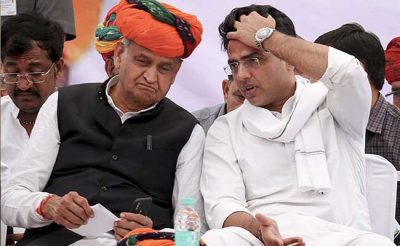 [splco_spacer]
“They used to speak of ‘Congress Mukt Bharat’ but now they are afraid of Congress. The government is stable in Rajasthan, it will complete its full term. We are engaged in preparations to win the next elections ,” said Gehlot.
Fuelled by reports of alleged rivalry between Rajasthan Chief Minister Ashok Gehlot and Depuy Chief Minister Sachin Pilot, Congress leader Rahul Gandhi has invited the latter for a crucial meeting at 5.30 pm on Sunday.
Meanwhile, Pilot arrived in Delhi today for a meeting with Congress interim President Sonia Gandhi,
The sources added that at least a dozen MLAs from Pilot’s camp are also staying put in Delhi-NCR.
Meanwhile, Congress General Secretary In-Charge of Rajasthan, Avinash Pandey has submitted a report to party’s interim president Sonia Gandhi that mentions there is some resentment of the MLAs that will be taken care of.
[splco_spacer]

Share via Massive protests have erupted across the country against the controversial citizenship law and the NRC. In South-East Delhi’s Shaheen Bagh, women have been sitting on protest since December 15 last year. Inspired by the Shaheen Bagh protests, similar protests led by women have cropped up in various parts of the country.   The Read More…

Share via Gandhi released the promo of his upcoming video series ‘Arthvyavastha Ki Baat, Rahul Gandhi ke saath’   This means Talk About The Economy with Rahul Gandhi. He said the video series will be available on Monday at 10am.   Congress leader Rahul Gandhi on Sunday announced a new series of videos to talk Read More…

Share via The BJP sponsored 12-hour bandh protesting the death of two youths at Islampur in North Dinajpore had had virtually no effect in Kolkata but reports of sporadic clashes between BJP and TMC supporters were reported from different parts of the state. The Calcutta High Court directs the West Bengal government to ensure that Read More…