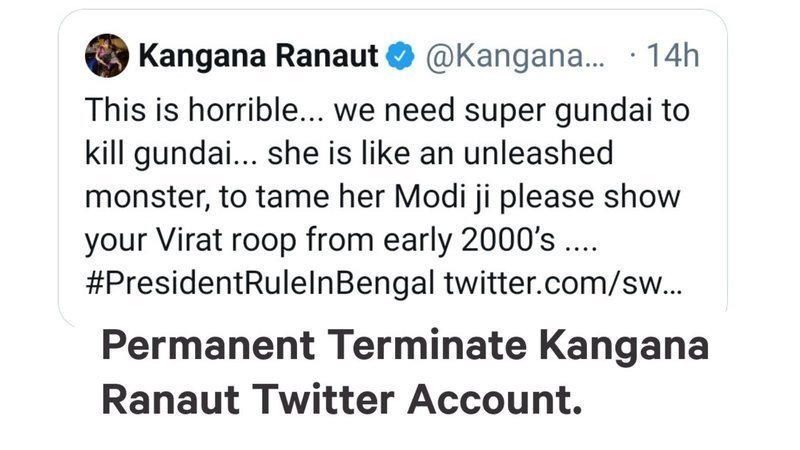 In the tweet that appears to have spurred this action, the actor seems to urge Prime Minister Narendra Modi to “tame” Mamata Banerjee using his “Virat Roop” from “early 2000s” in Bengal.
She was reacting to a tweet by journalist-BJP leader Swapan Dasgupta on the violence in Bengal since election results were announced on Sunday; Mamata Banerjee’s Trinamool Congress – which won a landslide victory – and the BJP have blamed each other for the clashes and arson.
Kangana had shared a video, where she commented on the reported violence that took place in West Bengal after the assembly election results were declared.
The actress had captioned the video: “Distressed beyond words, death of democracy, important message for our government #BengalBurning #BengalViolence“
“We’ve been clear that we will take strong enforcement action on behavior that has the potential to lead to offline harm, a Twitter spokesperson said in a statement.
“The referenced account has been permanently suspended for repeated violations of Twitter Rules specifically our Hateful Conduct policy and Abusive Behaviour policy.
We enforce the Twitter Rules judiciously and impartially for everyone on our service,” the spokesperson added.
According to Twitter’s Abusive Behaviour policy, “one may not engage in the targeted harassment of someone, or incite other people to do so or attempt to harass, intimidate, or silence someone else’s voice”.
When an account is suspended permanently, the account holder is notified about the rules they have violated, the social media platform said citing the policy.
When IANS reached out to Kangana, she said: “Twitter has only proved my point they are Americans and by birth a white person feels entitled to enslave a brown person, they want to tell you what to think, speak or do.”
She added: “Fortunately, I have many platforms I can use to raise my voice including my own art in the form of cinema but my heart goes out to the people of this nation who have been tortured, enslaved and censored for thousands of years and still there is no end to the suffering.”
On Monday, writer-lyricist Hussain Haidry had shared two tweets of the actor and urged people to report the account.
If you are a blue tick account or with large following, I am not asking you to speak up against this. But please just quietly REPORT these two tweets. This is calling for mass violence. And directing it at Muslims, he wrote.
Many social media users have called Ranaut out for spreading hatred.
The actor also posted a video on Instagram where she termed the silence of the liberal international media on Bengal violence their “conspiracy against India” . Ranaut is also active on Facebook.
Last year, Ranaut’s sister Rangoli’s account was suspended on the microblogging website. The actor became active on Twitter after that.

The head of an Indian parliamentary panel accused Twitter of disrespecting New Delhi’s sovereignty on Wednesday, after mapping data showed Indian-ruled territory as part of China in what the social network said was a quickly resolved mistake.   When some people tagged their posts as being in Ladakh, Twitter showed it to be in China. Read More…