Skip to content
Violence broke out at the Wistron’s Narasapura facility as a large number of workers went on a rampage last Saturday over issues related to payment of salary.
One week after terrific violence broke out at Wistron Corporation’s plant near Bengaluru where iPhones and other IT products are manufactured,
Apple on Saturday placed the Taiwanese tech giant on probation after finding that the company failed to implement proper working hour management processes. 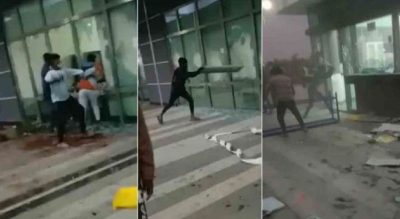 Apple said Wistron will not receive any new business from Apple before they complete corrective actions.
“Apple employees and independent auditors hired by Apple have been working around the clock to investigate the issues which occurred at Wistron’s Narasapura facility.
While these investigations are ongoing, our preliminary findings indicate violations of our Supplier Code of Conduct by failing to implement proper working hour management processes,” Apple said in a statement.
In Meanwhile Taiwanese conglomerate Wistron has sacked its vice president Vincent Lee who oversaw the business in India as it agreed to lapses in payment to workers at the Narasapura facility near Bengaluru, which was vandalised last Saturday.
“Since the unfortunate events at our Narasapura facility we have been investigating and have found that some workers were not paid correctly, or on time. We deeply regret this and apologize to all of our workers,” said the company in a statement.
“Some of the processes we put in place to manage labour agencies and payments need to be strengthened and upgraded. We are removing the Vice President who oversees our business in India,” it added.
The company which manufactures Apple iPhones apart from Lenovo and Microsoft products at the 44-acre plant said that it is enhancing its processes and restructuring the teams to ensure these issues do not happen again. The company has around 1,000 people in various managerial roles in the country.
While assuring that all employees will be fully compensated immediately the company has established an employee assistance program for workers at the facility.
“We also set up a 24-hour grievance hotline in Kannada, Telugu, Tamil, Hindi and English to ensure all workers can voice any concerns they may have anonymously,” according to the company.
It reiterated that it is committed to business and employees in India.
Splco Reporter
Special Correspondent Group of right thinking writers who eulogise self expression in quest of truth in news making jointly contribute under the platform of splco.me a novel social media channel.

A video in which some of BJP workers from Asansol, West Bengal can be seen burning effigies of Supreme Leader of North Korea, Kim Jong Un while shouting “Boycott China!” went viral on social media.   The BJP workers confused Kim Jong Un with Chinese President Xi Jingping.   Angry with China after the violent Read More…

Amazon Web Services (AWS) which is the Cloud arm of the commerce giant suffered a huge outage in the US region late on Wednesday affecting several websites and apps and the recovery took a couple of hours.   Several apps and services posted on Twitter that they were experiencing problems with the AWS services.   Read More…

A ceremonial session of Congress to formally declare President-elect Joe Biden’s victory devolved in an instant into a scene of violence and mayhem in the Capitol on Wednesday (Jan 6) when a pro-Trump mob stormed the building, halting the counting of electoral votes. Joe Biden was formally recognised by Congress as the next US president Read More…