Skip to content
Share via
It’s been over four  days since Bharatiya Janata Party (BJP) MLAs from Karnataka were shifted to a luxurious seven-star resort on the outskirts of Gururgam in the national capital region. The BJP MLAs say they are bored.
Speaking over the phone from inside the heavily guarded ITC Grand Bharat, Manesar, one of the legislators G Thippareddy told media

“We are clueless. Nobody is giving us the correct information. We are so bored that we are sitting and watching other MLAs play cricket in the hotel lawns.”

Bharatiya Janata Party MLAs decided that they would also leave Delhi in batches and reach Bengaluru by Friday. 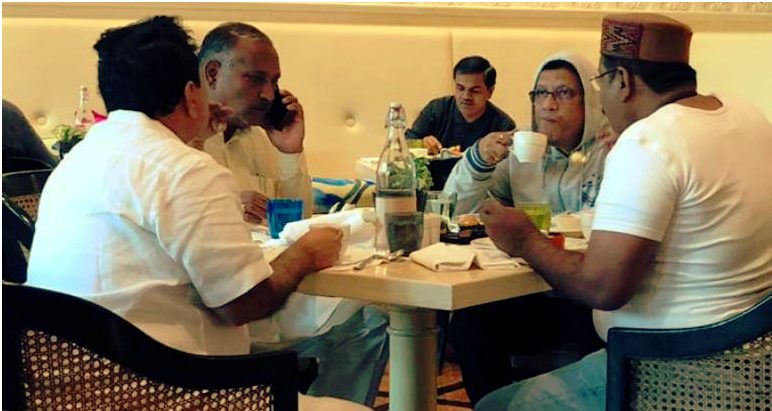 As Congress stepped up its efforts to quell dissidence, BJP state chief BS Yeddyurappa, asserted his party was not involved in any operation to topple the government.
However  BS Yeddyurappa flew down to Bengaluru and said his MLAs were not holed up but were analysing the present political situation. “We had gathered all our MLAs at one place and were discussing preparations for the upcoming Lok Sabha polls for the last two-three days. Today all are coming back” he said.
In the mean while BJP MLA CT Ravi hit out Congress and said that it’s Congress’s responsibility to take care of the rebel MLAs. “If there is fire we as the opposition party are bound to add fuel to it. Congress can’t blame us,” said Ravi.
Karnataka Congress MP who didn’t want to miss the hospitalisation  of Amitshah  said ” Some legislators were kidnapped and taken to Mumbai where the BJP and RSS guarded them. But some MLAs have come back because of which Amit Shah got scared and fell ill. It’s not just any illness, he has swine flu.
If you try to topple the Karnataka government, you won’t get just swine flu, but you’ll also suffer from vomiting and loose motion,” Hariprasad said in Kannada during his speech at the protest.
Hariprasad’s  comment went viral on social media. In retaliation in a tweet, the BJP requested Congress president Rahul Gandhi to admit Hariprasad to NIMHANS – a mental health hospital  for treatment.
“Congress MP & AICC General Secretary BK Hariprasad mocking at health condition of Sri Amit Shah Ji shows his mental stability. This rogue needs to learn human values & is unfit to live in a civilised society,” the saffron party said.
With war of words between BJP and Congress  reached a new nadir  Political pundits in Karnataka said the operation lotus 2.0 initiated  by BJP has gone muted

Share via Reliance Group on Tuesday said that it has decided to withdraw the Rs 5,000 crore defamation suits against several Congress leaders and National Herald newspaper for “defamatory” remarks on the controversial Rafale fighter jet deal.   A statement issued by the company’s spokesperson said, “We believe that the defamatory statements by certain individuals Read More…

Share via The Union Home Ministry has informed a department related Standing Committee of Parliament that it needs three more months to frame the rules of the newly passed Citizenship Amendment Act (CAA). Lok Sabha had passed the CAA legislation on December 9, 2019 and Rajya Sabha on December 11, 2019 following which the Narendra Read More…