Skip to content
Share via
Bihar politician Upendra Kushwaha today quit as a minister at the centre, declaring in his resignation letter to Prime Minister Narendra Modi, “I stand dejected, betrayed by your leadership.” He has also walked out the BJP-led National Democratic Alliance (NDA) and said that he has his options open.
That, he said, could mean contesting elections alone, joining the anti-BJP opposition alliance now being tested or a third front. 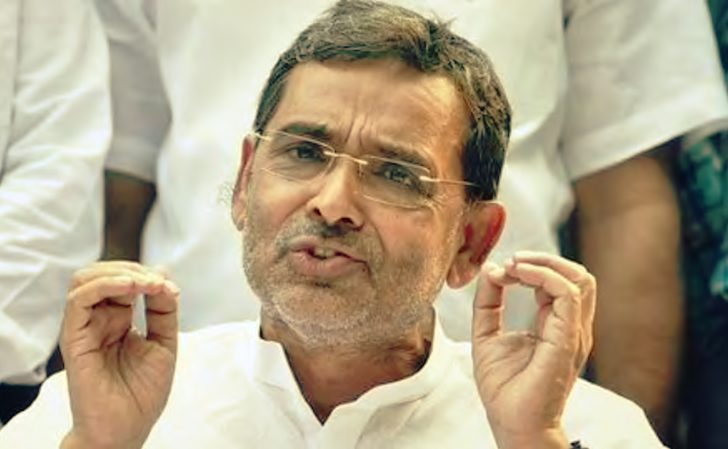 But he is not attending a meeting of opposition leaders from different political parties being held in the capital today to work out a strategy to forge what is being called a “grand alliance” against the BJP ahead of the Lok Sabha election next year.
Kushwaha announced his divorce from the NDA at a press conference in Delhi prefacing it with a list of difficulties and betrayals that he claimed he has had to endure as a member of the alliance in Bihar.
“They will not open their account,” he said referring to the BJP and Bihar chief minister Nitish Kumar, who he alleged, were out to finish his party.

“Narendra Modi did not live up to people’s expectation as prime minister… People thought achche din will come for Bihar… people of Bihar feel cheated,” the minister of state said soon after sending his resignation to PM  .

Upendra Kushwaha also launched a sharp attack on the NDA government in Delhi and Bihar, accusing the government of pushing the agenda of what he called was, the agenda of the BJP’s ideological mentor, RSS, in universities and elsewhere.
“I feel I should not be a minister when RSS agenda is being implemented,” he said.
Kushwaha had been dropping hints about quitting the BJP-led national coalition for weeks, particularly after Chief Minister Nitish Kumar’s Janata Dal (United) negotiated a seat-sharing pact for the 2019 general elections with BJP boss Amit Shah that they declared, would reduce seats for their two other alliance partners.
Upendra Kushwaha’s Rashtriya Lok Samta Party, or RLSP, had joined the NDA ahead of the 2014 Lok Sabha elections and won three seats.
The BJP ended up with 22 seats and Ram Vilas Paswan’s Lok Janshakti Party six. That equation changed after Nitish Kumar’s return.
Kushwaha had attempted to reach out to Amit Shah and Prime Minister Narendra Modi and sought appointments with them to address his concerns but found them less than willing to engage him in negotiations.
It is around this time that Kushwaha, prepping for his exit from the NDA, put out a 25-point charter of demands for the Nitish Kumar government that asked the BJP-JD(U) government to improve its governance record.
The demands include appointment of school teachers, exempting teachers from non-teaching work and timely holding of the student union elections.
Kushwaha is already in touch with expelled Janta Dal (United) leader Sharad Yadav and is discussing a merger of their parties ahead of next summer’s parliamentary elections.
Kushwaha, a protégé-turned-rival of CM Nitish Kumar, comes from the backward Koeri community, which accounts for roughly 5-6% of Bihar’s population and has significant presence in 25-30 assembly segments.

Share via The Supreme Court on Tuesday refused to pass an immediate order to lift restrictions imposed on telecom and internet services in Jammu and Kashmir, stating that the Centre must be given some time to restore normalcy in the state.   Observing that the situation in J&K was “very sensitive”, a three-judge bench presided Read More…

Share via Rajasthan Additional Chief Secretary (Health), Veenu Gupta said, “So far, there are a total of 29 people who have tested positive for Zika virus.” As one of those affected in Jaipur hailed from Bihar and visited his Siwan home recently, the eastern state has issued advisories to all its 38 districts to keep Read More…

Share via As guessed by many in Social media the former IPS officer who talked wrongly  about quota system from which and using the quota system  he become IPS has praised heap of praise to Narendra Modi leadership style and joined BJP, on Wednesday August 25. Many in the state wonder why a single man Read More…