Leaders of several opposition parties graced the event, which saw Mamata Banerjee stating that the PM Modi’s government has passed its expiry date.

Similar to how medicines have expiry dates, the time for Modi government to leave has come.
Uplifting West Bengal’s role during the freedom struggle, she said, “Bengal has always shown the way forward and it continues to do so.
So many scandalous things have happened in the country and you should see the amount of money the country had five years ago and what it has now.” 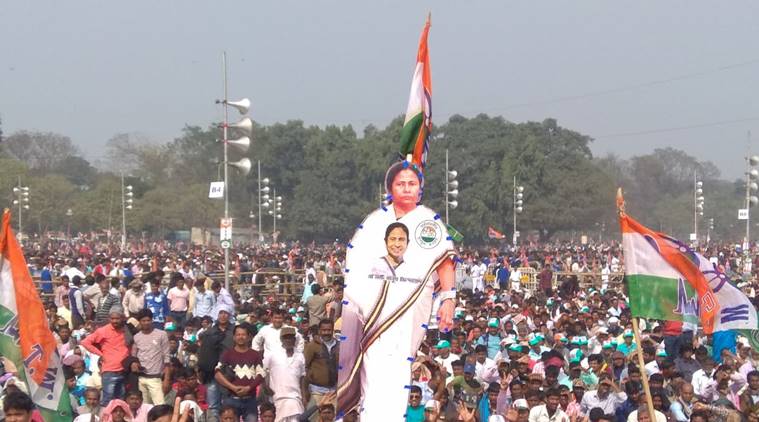 H D Deve Gowda, former prime minister
The first meeting of the Grand Alliance has been organised in Kolkata. The main task before us is how we should move forward. I have heard all the senior leaders speak. Our time is very short, we have only two months. The only issue before us is how all of us will come together; what our future is. It is a herculean task for all of us to forget our differences and come together. Using all machinery, they (the BJP) are going to create an atmosphere of fear. Instead of building a strong nation, he (Modi) wants to destroy the secular system of the nation. This meeting is a clear indication that the people want a response. But we have to work out how to give good governance without any hindrance. We need to build confidence in the people that a coalition will last five years.
Mallikarjun Kharge, Congress leader
The country at large is under immense strain. Economically, citizens have been stripped. Politically, institutions have been undermined. We need to defeat the forces that are trying to sabotage the Constitution of India. Till we unite, we will have to continue seeing Modi, Shah trample democracy, secular values of India. The upcoming General Elections will be fought on the faith of restoring democracy in our country. This rally marks an important event to galvanise leaders from across the political spectrum to fight the arrogant Modi government. I wish it all the success. This is the message given by Sonia Gandhi ji. I appeal to all leaders to unite to save our democracy.
Abhishek Singhvi, Congress leader
“The clouds are parting. A rainbow of political parties is forming. The time for a coalition has arrived. The Modi government is intolerant of any criticism. PM Modi and BJP chief Amit Shah’s motive is to mislead the public and get votes. I applaud Mamata di’s efforts to bring everyone together on one platform.” Singhvi had earlier tweeted, “India is an iridescent nation consisting of many colours. It is the of colour language, province, and ideology. Every single party of the Mahagathabadhan is represented by a colour. The BJP has been afraid of blending these colours.”
Farooq Abdullah, chairman of National Conference
After 70 years, India has yet another challenge: people are being divided on religious lines. Fire is being spread in the northeast over the Citizenship Amendment Bill. If you want to save this country, everyone has to sacrifice something. We will unite to save the country. I am a Muslim, but a part of Hindustan, and every Kashmiri wants to stay with India.
In the last four years, the current government has given us problems from all sides. We have to finish the BJP, and for that it is important to fight elections together. We should approach EC, meet the President, and say we want ballot papers. This year, we want a new government that plays fair with institutions.
Yashwant Sinha, former Union minister
“This is not about removing one man from power. We have come together to defeat an ideology. Today there isn’t one democratic institution that the current dispensation hasn’t destroyed. The country’s economy is in doldrums; this is the first government that plays around and exaggerates facts and figures. You all know what the ground reality is and that the government wants to divide society and country.”
Arun Shourie, former BJP leader
We (opposition parties and leaders) have to have a single aim – that is ousting the BJP in the 2019 Lok Sabha elections. Become Arjun (of Mahabharata), pitch united opposition candidates against the BJP contestants to win the polls. It will not be easy work – pitching a single opposition candidate in each seat against the BJP. But we must sacrifice for the country, with a sense of love for it.No other government has told so many lies. Never before were institutions undermined in this manner. Not one institution is left which has not been destroyed by the current government at the centre.
Shatrughan Sinha, BJP leader MP
We are here to give a new direction to the country. We are here to take the views from the NEWS (North, East, West, South) of United India. The mood of the country is one and is towards development. There is too much of life among the younger generation. I cannot compromise with principles. Before BJP, I belong to this country. If speaking the truth is rebellious, then I am a rebel. 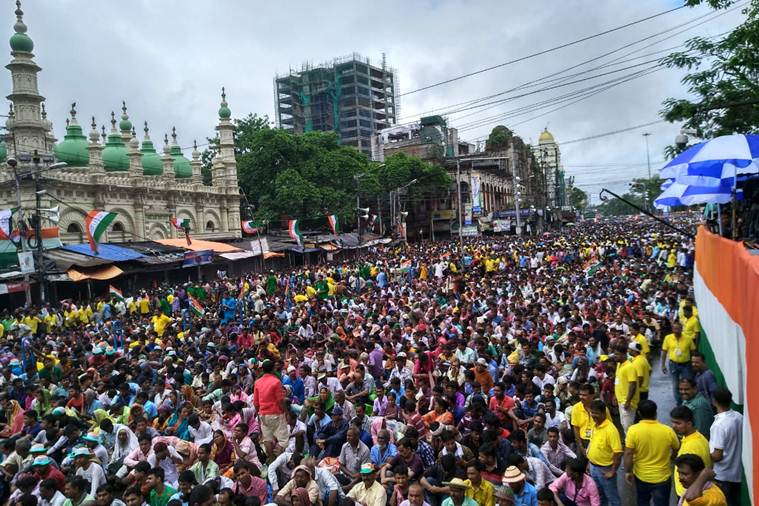 Akhilesh Yadav, Samajwadi Party chief
Bengal will show the way to the rest of the nation. They tease us saying they have so many PM hopefuls, but who will be the one? The public will decide who will be our PM. We ask you: who failed you? Who upset the country and its people? Who played dirty games and spread hatred? It’s the BJP. When they promised sabka saath sabka vikas, they tried to poison your society. PM Modi’s message is a message of hate.
The BJP is forming alliances with agencies like the CBI, but we have tied up with the people of the country. The SP and BSP has united against the BJP. We have tried to bring the parties together and this has made BJP very insecure.
N Chandrababu Naidu, TDP leader and Andhra Pradesh Chief Minister
I really appreciate Mamataji for organising this great meeting today, to change the future of the country. Today is a historic day. We have only one ambition — save India, save democracy. The BJP government wants to divide India, but we are here to unite the country. That’s why you see all of us gathered here together.Five years ago, people gave a clear mandate for BJP under the NDA. But they betrayed the nation.”
Arvind Kejriwal, AAP leader and Delhi Chief Minister
In the last five years, the Modi-Amit Shah combine has finished this country. Today, the people are fed up with them. The Prime Minister has lied, taken votes from the youth, promised them jobs. Today, jobs is a far-fetched ideal, there is a job deficit and the farmers are worst hit. Farmers are committing suicide when their crops are destroyed. Modi and Shah hand them over to insurance companies to recover their money, and these insurance companies are Modi’s friends. They don’t get their money.
The women in the country are also upset because our PM follows those people who abuse them on social media.
M K Stalin, DMK chief Opposition Leader of Tamilnadu
This is the second freedom struggle. The elections will serve as a platform to get rid of the Modi-led BJP government. The Prime Minister has claimed that there is no Opposition in India, today he is talking only about oppositions. He is scared that we will dethrone the BJP. The BJP government is not for commoners, it’s for corporates (Stalin refers to the Rafale deal, and businessmen Vijay Mallya and Nirav Modi).
If Modi comes to power again, India will go back 50 years. I thank Mamata for organising this rally against the BJP government. Narendra Modi will fear few people, Mamta Banerjee is one amongst them. Modi and Amit Shah fear to enter Kolkata and that’s because of Mamta. She is an Iron Lady, she had immense respect on our leader Kalaingar. Our unity will defeat Modi, Our unity will save India.
Sharad Pawar, president of Nationalist Congress Party
Not one institution is left, which has not been destroyed by the current government at the Centre.
H D Kumaraswamy, JD(S) leader and Karnataka Chief Minister
India is one of the strongest democracies — unity and diversity is our future. However, today we’re witnessing a system where there is an undemocratic, anti-constitutional government at the Centre. Regional parties have the strong instinct to connect with the people and protect the interests of their states.
SC Mishra, BSP leader
Factories have closed down, farmers are in distress, minorities are the worst affected under this government. Such a government needs to be uprooted. If we want to save the Constitution, we need to get rid of the BJP government.
Tejashwi Yadav, RJD leader Opposition Leader of Bihar
If you do not bow before the government, it will use the central agencies against you. The Enforcement Directorate and Central Bureau of Investigation are BJP’s alliance partners. We have to save the country. Modi will get sleepless nights after this opposition meet. I thank Mamata ji on behalf of my father Lalu Prasad Yadav too. If the country’s ‘chowkidaar’ commits a mistake, then the ‘thanedaar’ will punish you.
Splco Reporter
Special Correspondent Group of right thinking writers who eulogise self expression in quest of truth in news making jointly contribute under the platform of splco.me a novel social media channel.

RSS chief Mohan Bhagwat’s speech at the ‘Dharm Sansad’ (religious council), called by Vishwa Hindu Parishad in Prayagraj, Instigated aggressive emotions after protesters raised slogans demanding early construction of Ram temple in Ayodhya.   The VHP meet, which coincides with the Kumbh Mela, is expected to put pressure on the government over the delay in Read More…

Two priests at a temple in Bulandshahr district Jagdish (55) and Sher Singh (45) were apparently hit with a lathi at Paguana village’s Shiva temple in Anupshahr police station area, police said.   According to Uttar Pradesh Police, Murari, also known as Raju, was accused by the sadhus two days ago of stealing a pair Read More…

JD(S)-Congress alliance on Saturday swept the Mysuru Zilla Panchayat President-Vice President polls.   Parimala Shyam of JD(S) and Gowramma Somashekar of Congress elected as the President and Vice President, respectively.   Though BJP member Guruswamy had filed nomination for VP, he withdrew the papers following JD(S) joining hands with Congress.   It may be recalled Read More…