Skip to content
The political slugfest over the beating up of a Dalit peasant family by the police during their eviction from government land in Guna district of Madhya Pradesh has intensified.
The Bharatiya Janata Party (BJP) has raised questions over the illegal occupation of the land by a person, Gabbu Pardi and his alleged links with senior Congress leader and former chief minister Digvijaya Singh.
President of the BJP’s Madhya Pradesh unit Vishnu Datt Sharma has condemned the incident saying an investigation into the case has been initiated.
Digvijaya Singh’s role in the case should also be investigated, he added, alleging that it was at his behest that Gabbu Pardi mustered the courage to occupy the land.
The eviction from the land meant for a college was started in November 2019, but due to political pressure by the then Kamal Nath government it was stalled.
Following the statement by Sharma, Digvijaya Singh said, “I welcome BJP leader Sharma’s statement that an inquiry be made into my relations with Gabbu Pardi and request Shivraj ji that the investigation be made by Mr Sharma.
It may also be inquired into why no action for eviction was taken during the 15-year rule by the BJP.”
State Home minister Narottam Mishra jumped in to foray and has said that Digvijaya Singh should answer the questions raised by the BJP state president. Digvijaya must disclose his relations with Gabbu Pardi, he added.
Earlier In a suicide attempt, a helpless Dalit couple from Madhya Pradesh’s Guna district allegedly drank pesticide after their crops were forcefully razed by revenue department officials,
The incident which took place on Tuesday, July 14, also revealed atrocious police brutalities on Ram Kumar Ahirwar (38) and Savitri Devi (35) as they were assaulted by police officers before being dragged into an ambulance.
[splco_spacer] 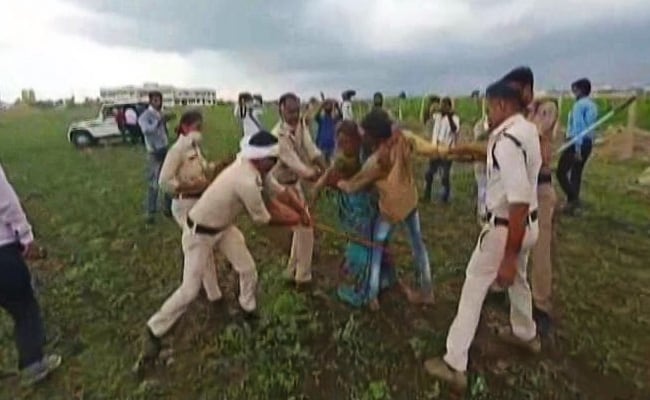 [splco_spacer]
Disturbing visuals of the incident show Savitri clinging on to her husband as the police brutally rain blows on them with their lathis.
According to the government in 2018, 20 bighas (5.5 acres) of land had been set aside for building a college. Allegedly, this land was encroached upon by Ahirwar and Savitri Devi who had claimed that they had been farming there for years.
It was reported that on Tuesday, officials from the state revenue department, along with the cops, had visited the land to evict the couple and construct a boundary wall there.
However, the couple resisted and when their crops were bulldozed, they drank pesticide in an attempt to kill themselves. The cops reportedly also pushed and verbally abused the couple’s children who were seen crying and pleading for mercy.
Savitri Devi as saying that she and Ahirwar were Rs. 3 lakh in debt and that they didn’t know whose land it was. She said, “We’ve been farming on it for a long time. When our standing crop was destroyed, we didn’t have other option, but to kill ourselves.”
Whereas IG Gwalior Range Raja Babu Singh as saying that the real squatter on the land was a person named Dabbu Pardhi who allegedly had many criminal cases against him and that he had sublet the land to the Ahirwars for tilling.
While the police was let go scot free, an FIR was registered against the couple and they were booked under Section 353 of the IPC (Assault or criminal force to deter public servant from discharge of his duty, Section 309 of the IPC (Attempt to suicide) among other charges
The publication also reported that IG Raja Babu Singh also alleged that the video had been clipped and shared as the police wielding lathis, but the police was only trying to shoo away the people who were resisting the cops from taking the farmer couple to the hospital.
Condemning the incident, Congress leader Rahul Gandhi took to Twitter to say, “Our fight is against this mentality and injustice.”
A statement from the office of Kamal Nath, General Secretary of the Congress stated that if there was a dispute with regards to the land, it could have been taken care of legally instead of the officials taking the law in their own hands and beating up the couple and their other family members.
[splco_spacer] 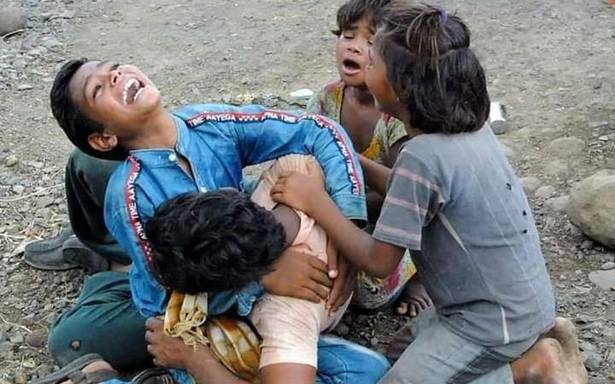 [splco_spacer]
Only after criticism and the growing outcry, Madhya Pradesh CM Shivraj Singh Chouhan ordered for the sacking of the District Collector S Vishwanathan and Superintendent of Police (Guna), Tarun Nayak.
MP Home Minister Narottam Mishra said that a high-level investigation team would be leading a probe in the matter.
The police cleared the encroachment, resorting to physical action against the Dalit family. Six policemen have been suspended and Gwalior’s Additional Director General of Police, Collector and Superintendent of Police transferred.
[splco_spacer]
Also read :
Splco Reporter
Special Correspondent Group of right thinking writers who eulogise self expression in quest of truth in news making jointly contribute under the platform of splco.me a novel social media channel.

In a video statement recorded by the magistrate before the victim’s death, the minor girl is heard naming the accused and narrating how they poured petrol on her and set fire.   A 14-year-old girl who suffered severe burn injuries after she was set on fire by two men at Villupuram succumbed to injuries on Read More…

Skies in several areas of Gurugram were covered with the crop-destroying desert locusts. The locusts were seen in condominiums such as Beverly Park, Garden Estate and Heritage City.   Around 10 days ago, farmers of 70 villages were imparted training with the help of Krishi Vigyan Kendra to deal with the locusts and safeguard their Read More…