Skip to content
Share via
After a brief lull late Wednesday, moderate to heavy rains lashed the Jammu region early on Thursday.
Dalwas portion of the national highway, washed away by a mudslide, has also not been restored because of the incessant rains, said an official.
The men and machines of the NHAI are on standby but heavy rains are hampering the restoration work, he added.
“It is raining heavily in Ramban district making it very difficult for the NHAI to undertake restoration work,” informed a local from Batote.
As a result, over 2000 vehicles remain stranded at various places at Qazigund, Chenani, Udhampur and Nagrota. 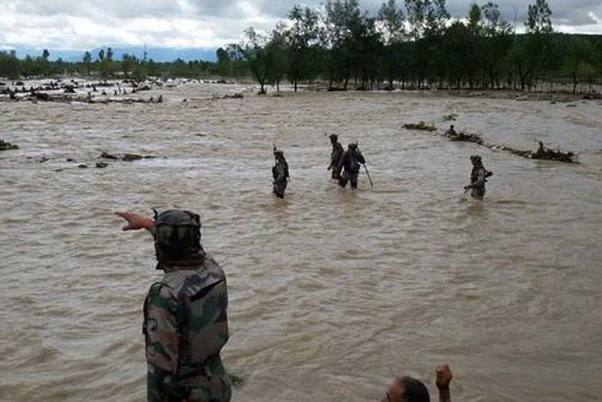 Heavy rains also lashed twin border districts of Rajouri and Poonch, south of Pir Panjal on Thursday morning.
“After a brief lull, heavy downpour started in the two districts early Thursday.
All the rivers and rivulets are in a spate. As of now, there are no reports of any untoward incident. People have been advised to stay away from water bodies in view of rains,” said Poonch SSP Ramesh Kumar Angral.
As a result the 270 km long Jammu-Srinagar national highway, the all weather surface link with Kashmir, remained snapped for the third straight day on Thursday as heavy rains lashed Ramban district triggering landslides in Panthial, Mompassi and Marog.
Jammu-Poonch highway, however, remains through for traffic.
Rajouri SSP Chandan Kohli said that police was also keeping a tab on the situation in Rajouri district.
Mughal Road that connects Rajouri and Poonch with Shopian in South Kashmir has been affected by landslides at several places.
Similar reports of heavy to moderate rains also poured in from the Doda region comprising Kishtwar and Bhaderwah.
IMD director Sonam Lotus said, “The present weather system is likely to continue for the next 24 hours.

Light to moderate rain with isolated heavy rain is most likely at widespread places of J&K and light to moderate rain are most likely at scattered places of Ladakh region, especially in Zanskar, Drass, Minamarg -Zojila area. Significant improvement is expected from Friday’’.
He also said there was a possibility of flash floods and landslides in vulnerable areas and asked people to remain cautious.

Share via Pakistan is planning to deploy medium-altitude long-endurance unmanned aerial vehicles (UAV) at Line of Control (LoC) to create further unrest in Jammu and Kashmir, according to reports.   Security agencies’ sources said that Pakistan is procuring Cai Hong-4 (CH-4) UAV from China in big numbers in order to unleash mayhem in Kashmir valley. Read More…

Share via China’s lone opposition in the 15-member UN Security Council to any mention of terrorism resulted in a delay of nearly one week in the issuance of a statement by the powerful body on the dastardly Pulwama terror attack, official sources said on Friday.   While China was trying to water down the UNSC Read More…