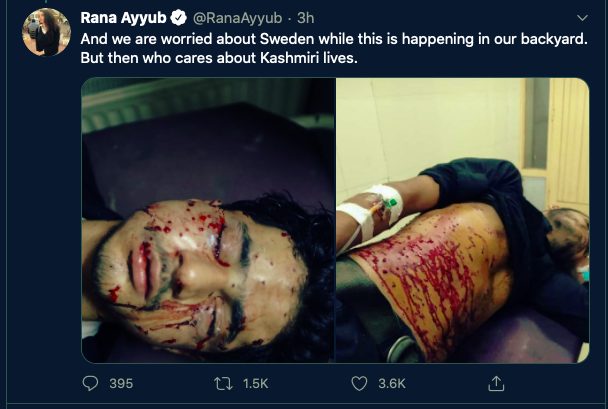 “When the mourners offered resistance and tried to march towards their destination, the cops resorted to baton charged and fired teargas canisters to disperse them,” Mohammad Ali, an eyewitness told media
The mourners, he said, regrouped and continued to carry on with their march. Ali said the situation took an ugly turn when cops fired at the mourners with pellet guns, leaving many injured.
[splco_spacer] 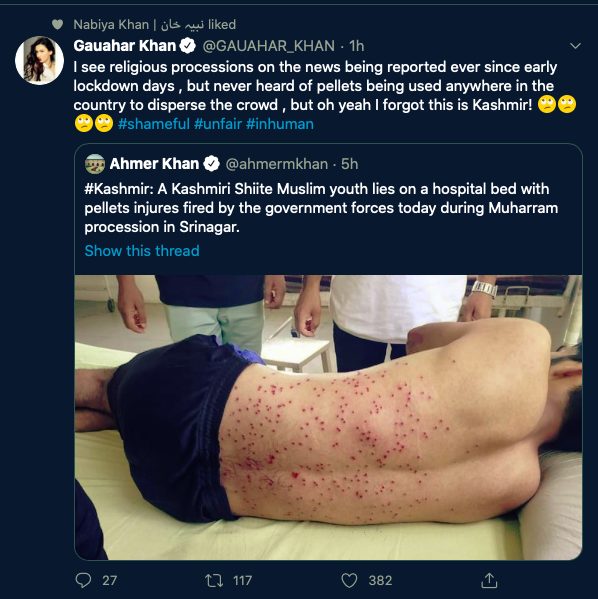 [splco_spacer]
“The police action angered the mourners. They started chanting pro-freedom and anti-India slogans and engaged the cops in pitched battles. Due to the clashes, Gari Kadal and adjoining localities presented the look of a battleground,” Ali said.
He said nearly six mourners were also taken into custody by the police and taken to the nearby police post.
“The mourners in the procession were adhering to social distancing norms and were wearing masks as well. I fail to understand why police used force against a peaceful procession,” Kifayat Hussain, a local said.
He said the procession would have concluded peacefully if the police had not used ‘brute force’ to disperse the mourners. He also alleged that police also thrashed many women and children while breaking up the procession.
According to the witnesses, the clashes in the area continued till late evening leaving around 40 people injured, five of them with serious pellet wounds in the face and eyes.
The injured were removed to the nearby Imam Hussain (AS) hospital for treatment. However, from there they were taken to SMHS hospital.
“Our OPD received over 30 injured mourners, some of them with pellets. Since, we don’t have adequate arrangements in place, the mourners went to Budgam and Srinagar hospitals for treatment,” an official at Imam Hussain hospital said.
Among those who visited the hospital, the official said many had suffered injuries in arms and legs, while trying to flee from the charging cops.
“I am afraid that the four boys brought to the hospital with pellet injuries will ever be able to see. Their condition wasn’t good at all,” he said.
Medical Superintendent, SMHS hospital Dr Nazir Choudhary told that five mourners with pellet injuries were brought to the hospital for treatment.
“Their condition is stable. We will soon know how much damage pellets have done to their body,” he added.
People from several parts of Dal interiors also had a tough time to reach Hassanabad as police had blocked road near Saida Kadal.
Witnesses said that police resorted to baton charge in Saida Kadal when hundreds of people, including women were on their way to Hassanabad on Saturday evening.
Earlier, cops burst a few tear smoke shells when mourners in Pazwalpora Shalimar tried to take out a procession towards Imam Bara, news agency KNT reported.
In Shamswari area of Khankah-e-Maula, police had imposed tough curbs to prevent people from taking out a procession.
However, late night reports said that peaceful Muharram processions were taken out in Hassanabad here, and Delina in Baramulla.
Officials had claimed that the force was used as the people had violated SOPs and taken out the Muharram processions in violation of the ban.
So far, police has arrested two youth for their alleged involvement in chanting pro-freedom slogans during a Muharram procession in Hokersar area of the city outskirts.
On Thursday, the Divisional Commissioner Kashmir Pandurang K Pole said that restrictions shall continue on all religious processions and gatherings in all districts in wake of Covid-19 pandemic.
[splco_spacer]

Jammu and Kashmir assembly was dissolved by the Governor Wednesday night hours after the PDP staked claim to form a government with the backing of rival National Conference and the Congress followed by another bid from the two-member People’s Conference which claimed the support of the BJP and 18 legislators from other parties.   The Read More…

The Jammu & Kashmir Administration, headed by that modern Nero, has issued full page advertisements in local Kashmiri newspapers asking the people to end their ‘self imposed’ shutdown, and resume normal lives. This fatuity really takes the cake.   Does that fat caporegime (whose Don and Consiglieri sit in Delhi), that real life Clemenza, not Read More…

The worst terror attack on Indian forces in Kashmir’s Pulwama could impact Sino-India ties as New Delhi and Beijing continue to differ sharply over listing Pakistan-based outfit Jaish-e-Mohammed (JeM) leader Masood Azhar as a ‘global terrorist’ at the United Nations.   The group has claimed responsibility for the attack and China has repeatedly in the Read More…