Skip to content
Dhoni and Jadhav joined forces in a tricky situation but were then involved in an unbroken 141-run stand for the fifth wicket to steer India to a comfortable six-wicket win in Hyderabad
Also clinical bowling performance backed up by unbeaten half-centuries from Kedar Jadhav and MS Dhoni helped India take a 1-0 lead in the five-match ODI series against Australia.
India lost Shikhar Dhawan very early in the chase when he drove Nathan Coulter-Nile loosely to Glenn Maxwell at point. But Virat Kohli and Rohit Sharma steadied the ship against the moving ball.
Kohli got going against Coulter-Nile when he first hit him through square leg and then followed it with a powerful pull. At the other end, Rohit punished deliveries that were bowled wide or full.
Amidst those boundaries, Rohit also had a hard time against Jason Behrendorff in particular, with the left-arm seamer beating the Indian opener’s outside edge on countless occasions.
The duo picked up the rate towards the end of the powerplay with Kohli also pulling Pat Cummins for the first six of the innings. While Rohit continued to be scratchy, the Indian skipper started scoring at run-a-ball and picked up Adam Zampa for a few boundaries.
The legspinner had the last laugh though when a quicker googly had Kohli trapped leg-before-wicket. The umpire had initially turned the appeal down before Australia reviewed it and got the decision successfully overturned.
Australia then went through a very good period of play when they also removed Rohit and Amabati Rayudu in quick time to storm back into the contest. While Coulter-Nile bowled a cross-seamer that got Rohit’s leading edge, Zampa bowled a leggie at the ideal length to kiss Rayudu’s outside edge. At the halfway mark, India were delicately placed at 105 for 4, needing Dhoni and Jadhav to resurrect the chase.
The two experienced campaigners had to replicate their feats at the MCG just one and a half months ago against the same opposition. 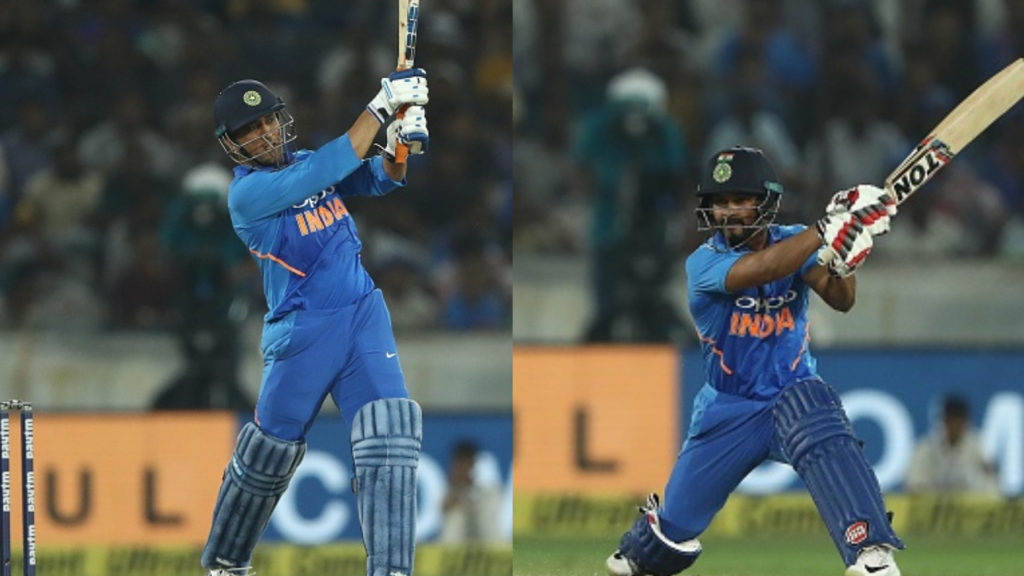 The target was pretty similar as well. Both Jadhav and Dhoni were more than happy to bide their time with the required run rate very much in their reach.
At one stage, they went through a seven-over period where they conceded just a solitary boundary. Dhoni then slowly got into the groove when he pulled Behrendorff authoritatively for a boundary towards deep midwicket before smashing Coulter-Nile over long for a maximum.
From thereon, it was the Jadhav show as Dhoni took a backseat. Jadhav was at his best picking up regular boundaries to bring up his fifth ODI half-century.
After crossing the milestone, Jadhav also showcased some innovation to add to his tally to bat Australia out of the contest. The duo raised their century stand with Dhoni also getting to his fourth successive fifty against the World Champions before polishing off the chase with successive boundaries in the penultimate over.
Earlier in the day, Australia stuttered to post 236 on the board after opting to bat on a surface that many believed will be friendly for the batsmen. That was never the case at least at the start as the out-of-form Aaron Finch found out.
The Australian skipper received a terrific delivery in the second over from Jasprit Bumrah as the ball took off from a good length while also straightening a touch after pitching to take the outside edge.
Marcus Stoinis and Usman Khawaja batted out the early period against the new ball where Mohammed Shami was in his zone troubling the batsmen.
Having seen off the tough period, both batsmen then took charge at the end of the powerplay. Vijay Shankar was cut for a boundary by Stoinis and Kuldeep Yadav was struck for a six straight over his head by Khawaja.
Vijay continued to adopt a short-ball strategy but with his pace and also with the pitch also starting to ease out, Stoinis took full toll collecting three more boundaries, following which Ravindra Jadeja and Jadhav were brought into the attack.
By the end of the 20-over mark, Australia had posted 87 for the loss of the solitary wicket. With both Stoinis and Khawaja well-set by then, the visitors would have wanted some fireworks ideally in the middle overs to up the ante.
But every time Australia wanted to accelerate, they lost a crucial wicket. Stoinis pulled one tamely to short midwicket off Jadhav and Khawaja soon fell after reaching his half-century when he failed to clear the fielder at the deep.
Once again, the onus was on Glenn Maxwell to rescue Australia and the 30-year-old capitalised on his good form to get going right from the word go.
He fetched a boundary each off Kuldeep and Bumrah to quickly move to 14 off 12 but failed to find support at the other end. Peter Handscomb looked assured and Ashley Turner too threatened for a bit but both batsmen fell at crucial junctures.
Shami, who was India’s best bowler on the day, then got the big fish when Maxwell missed a straight delivery to lose his off stump.
Struggling at 173 for 6 with ten overs still to go, Australia were then aided by a useful 62-run partnership between Alex Carey and Coulter-Nile. Carey struggled at the start but managed to fetch some streaky boundaries at the end to guide Australia to a respectable 236, a total that was easily 25 runs short.

India captain Virat Kohli is impressed with how well T Natarajan has coped with the pressure in Australia on his first international tour and says the left-arm seamer could be a real weapon at next year’s Twenty20 World Cup on home soil.   The 29-year-old Tamilnadu origin  emerged as a reliable death-bowling option for Sunrisers Read More…