Skip to content
Share via
Inside Gujarat spate of Congress MLAs resignations was in fact, the second in nature .
The first wave was in March, days after the Rajya Sabha polls were announced. Four MLAs had resigned at the time.
Congress party decided to take action after two of its MLAs resigned on June 4. A third resigned a day later.
With the news of three MLAs of the Congress party have resigned and there is apprehension that BJP might use its money power that may influence others , Congress sources said the party is eventually expected to move 26 MLAs to the resort in Rajasthan, which is ruled by the party.
Already Nineteen Congress legislators from Gujarat have been shifted to a resort in Rajasthan ahead of the Rajya Sabha elections in the state.
Congress sources said the party is eventually expected to move 26 MLAs to the resort, Wild Winds, located in Rajasthan’s Mount Abu.
Rajasthan is ruled by the Congress and party leaders have expressed hopes that the MLAs would safe from BJP interference there.
The Congress has now 65 MLAs in Gujarat, some of whom have already been packed off to different resorts. A group of MLAs from Saurashtra have been lodged at a resort in Rajkot called Neel City. Another group is at a a resort near Anand in Gujarat.
The Congress has named Shaktisinh Gohil and Bharatsinh Solanki for the polls and now has to decide who will be its first preference candidate as that person is likely to win.
NCP has issued a whip for its lone MLA to vote for its ally Congress. The Congress has alleged that the BJP is trying to engineer defections through bribery.
Taking a dig at the Centre’s “Atma-Nirbhar Bharat” campaign, senior Congress leader Kapil Sibal said “This is self-reliance of the BJP with the help of money power”.
“This is a virus which is there in BJP’s DNA. It is spreading this virus everywhere by luring MLAs all over.
But people are understanding this now,” he told reporters when asked about its MLAs switching sides ahead of the Rajya Sabha election.
[splco_spacer] 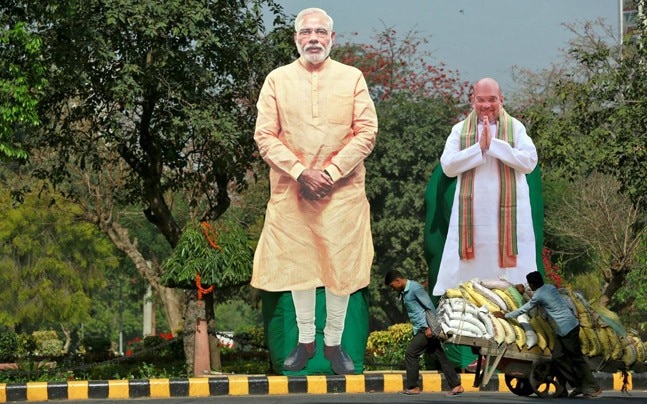 [splco_spacer]
With its current strength 65 strength the Congress can only be assured of a single seat instead of two, which it could have commanded earlier.
[splco_spacer]
Gujarat Congress President Amit Chavda hit out at the BJP government in Gujarat, saying instead of fighting the coronavirus crisis it was busy using its machinery to poach the MLAs of other parties.
[splco_spacer]
“At a time when government should work to save lives of people from coronavirus crisis, the government is busy using its machinery for threatening and horse trading of people’s representatives. Our MLAs are camping here to decide on future strategy,” Chavda told reporters in Abu Road.
[splco_spacer]
Abu Road is in Sirohi district of Rajasthan which shares its border with Banaskantha.
[splco_spacer]

[splco_spacer]
The BJP has 103 members in the 182-member state assembly, where a candidate needs 34 votes to win. But with news about 3 BJPs affected with Corona Virus BJP need further 2 seats to clinch 3 Rajya Sabha MPs
Of the four Rajya Sabha seats up for election in Gujarat, the BJP has three and the Congress, one.
The BJP has fielded Narhari Amin, Abhay Bhardwaj and Ramilaben Bara.
Even during corona Epidemic when Gujarat being second highest state with Number of deaths crossing 1200 But Ruling BJP In Rajya Sabha election. cutting in to ranks of Congress MLAs and denying the cake walk of 2 MPs it deserve but by offering tight fight that raised mercury in Gujarat Politics

Share via In Tamilnadu ADMK party has confirmed its alliance with the BJP and also announced Chief Minister Edappadi K Palaniswami as the CM candidate for the Assembly elections due in 4-5 months time. But however  the State Unit of the BJP head Murugan today said a decision on alliance and the CM nominee would Read More…