Skip to content
On Tuesday, Indian Air Force sources told media  that the Indian Air Force carried out an attack across LoC.
The IAF source said “At 0330 hours on 26th February a group of Mirage 2000 Indian Fighter jets struck a major terrorist camp across the LoC and completely destroyed it.
Totally 12 Mirage 2000 jets took part in the operation that dropped 1000 Kg bombs on terror camps across LOC, completely destroying it.”
Earlier, the Pakistan Army on Tuesday claimed that the Indian Air Force crossed the Line of Control (LoC) and dropped payload near Balakot in Pakistani territory.
A Pakistan Army spokesperson said Indian aircraft “intruded” from Muzaffarabad sector and faced “timely and effective response from Pakistan Air Force.”
“Indian Air Force violated Line of Control (LoC). Pakistan Air Force immediately scrambled. Indian aircrafts gone back. Details to follow,” the Spokesperson for the Pakistan Armed Forces, Major General Asif Ghafoor, tweeted early on Tuesday.
In another tweet, he added, “Indian aircrafts intruded from Muzaffarabad sector. Facing timely and effective response from Pakistan Air Force released payload in haste while escaping which fell near Balakot. No casualties or damage.”
Pakistan’s Chief of Army Staff (COAS) General Qamar Jawed Bajwa had visited Pakistani troops deployed at the Line of Control (LoC) in Kashmir and instructed them to “be ready to face any eventuality,” on Friday. 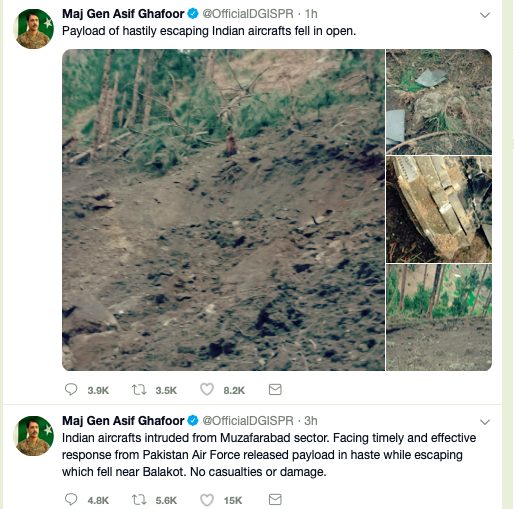 Bajwa had also visited the Headquarters Rawalpindi Corps on Monday, where he was updated on the operational situation and state of readiness along the Line of Actual Control (LAC), LoC and Working Boundary (WB).
He met with Chief of Air Staff, Air Chief Marshal Mujahid Anwar Khan at the Air Headquarters in Rawalpindi where the two chiefs “deliberated on operational environment including threat and response” and “expressed satisfaction on readiness, coordination and synergy,” according to Ghafoor.
Tensions are high between the neighbours following the ghastly February 14 attack, wherein a Jaish-e-Mohammed (Pakistan-based terror outfit) operative attacked a CRPF convoy in Jammu and Kashmir’s Awantipora in Pulwama district on the said date, leading to the death of over 40 CRPF personnel.
The attack has since been widely condemned, with the United States telling Pakistan to cease providing support and a safe haven to terrorists and terrorist outfits.
Pakistan Prime Minister Imran Khan had earlier promised “action” if “actionable intelligence” was provided by India about its links to the Pulwama terror attack.
Khan had also warned of “retaliation, without even thinking,” if any kind of military action is launched by India.
In response, India dubbed Khan’s statement as “a lame excuse,” asking him to stop misleading the international community.
Splco Reporter
Special Correspondent Group of right thinking writers who eulogise self expression in quest of truth in news making jointly contribute under the platform of splco.me a novel social media channel.

[splco_heading size=”15″ align=”left” margin=”30″]Gilgit-Baltistan as per wikipedia is part of the greater Kashmir region, which is the subject of a long-running conflict between Pakistan and India. The Ministry of External Affairs said Pakistan was told that entire Jammu and Kashmir and Ladakh, including areas of Gilgit and Baltistan, are an integral part of Read More…

The United Arab Emirates (UAE) on Friday said that it has not finalised any specific amount of monetary assistance for flood-ravaged Kerala. The clarification comes amid a raging controversy over the Centre rejecting foreign aid for the southern state, where over 350 people were killed and multitudes displaced due to heavy rains. UAE ambassador Ahmed Read More…

2 Replies to “India Claims dropping of 1000 kgs of bombs on LOC , Pakistan army said they responded”