The CBI took over the investigation from UP police into alleged gangrape and murder of a 19 years old  woman in a village in Hathras district of Uttar Pradesh on September 14 after registered  an FIR early Sunday under IPC sections related to gang rape and murder among others, and Scheduled Castes and Scheduled Tribes (Prevention of Atrocities) Act, officials said.

Hours after putting the Hathras rape case FIR on its website, the CBI then hurriedly removed it sensing possible violation of a Supreme Court order that FIRs in cases of rape and sexual assault, including those against minors, should not be put in public domain by police.

It should be noted  the apex court  during December, 2018, said FIRs in cases of rape and sexual assault, including those against minors, should not be put in public domain by police. The issue had cropped up when the court was hearing a batch of petitions filed after the rape and murder of a paramedic student on December 16, 2012, in New Delhi to support the initiatives on women’s safety across the country. 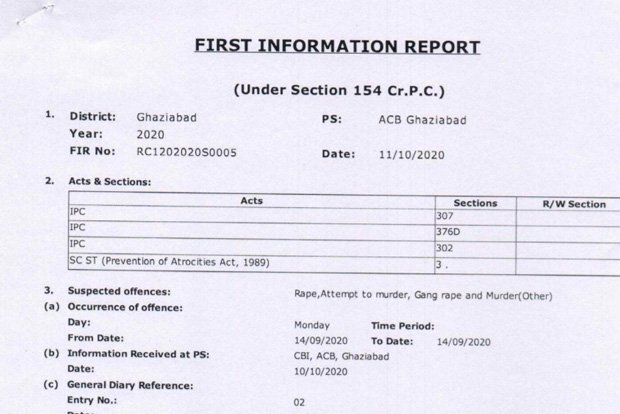 The agency, however, did not retract or remove its media statement from the website.  The FIR withheld the name of the Hathras victim, concealed using a whitening ink, but it was decided to withdraw it from public domain to avoid unnecessary controversy, sources said.

The BJP led yogi government ruled Uttar Pradesh police claimed that no rape had occurred as no semen had been found as per a forensic report.

However, forensic experts have pointed out that there was very little chance of the semen being found on the girl because samples were taken 11 days after the alleged rape. A medical examination should have been conducted within 24 hours of the crime being reported.

The UP police then went ahead and lodged an FIR against “unknown” persons for an attempt to trigger caste-based conflict and invoked sedition charges in the case. The FIR included IPC sections 24A (sedition), 505 (intending to cause public alarm), 153A (promoting enmity between groups) and Section 67 (transmitting obscene material in electronic form) of the IT Act. All of these pertained to materials being forged, manipulated and circulated through social media.

In one of the 19 FIRs filed by the UP police, it was alleged that the family of the girl who was gang-raped was offered Rs 50 lakh to lie about the state government. The police had also claimed that there was a deep conspiracy in Hathras and that the truth would be investigated.

The 19-year old woman succumbed to injuries at a Delhi hospital on September 29, which was followed by a hushed up cremation at night allegedly forced by the district administration.  The UP government later requested a CBI probe.

However in a major setback to BJP ruled UP government UP Police claim .,  Hathras case CBI’s FIR invokes penal code sections in contradiction to UP Police claims .

Meanwhile, the family of the victim appeared in front of the Allahabad court on Monday and reaffirmed that authorities had cremated her without permission

The CBI has stated that it would also be inquiring into the forceful cremation of the teenager by the district administration, in addition to the allegations of negligence and delay in filing an FIR on September 14.

It assigned the case to its Ghaziabad unit with a special team to investigate the crime, they said.

Probing Agency CBI in the Muzaffarpur shelter home case, on Friday told the Supreme Court that the names of 11 girls alleged to have been murdered by the prime accused and his accomplices had been ascertained and a “bundle of bones” recovered from a burial ground.     The CBI said the names of 11 girls, allegedly Read More…

A court on Tuesday sent the Vikas Khanchandani, Republic TV’s Chief Executive Officer (CEO) chief executive of India’s fiercely nationalist and notorious Republic television network to jail for 14 days, his lawyer said, after his arrest by the police in a case relating to manipulation of television ratings.   Mumbai police alleged that Republic TV Read More…

Gagandeep Kang is the first woman Fellow of the Royal Society working in India,

Gagandeep Kang, a seasoned Indian biologist and a professor at Christian Medical College, Vellore has become the first Indian woman scientist to be elected as the Fellow of the Royal Society (FRS).   Kang played instrumental role in developing two indigenous vaccines against rotavirus and typhoid.   “Out of 1,600 odd living Fellows (of the Read More…