Skip to content
In india Petrol and diesel prices went up for the eighth consecutive day on Tuesday .
For the first time ever, the prices of premium petrol in BJP ruled Indian state Madhya Pradesh’s Bhopal crossed Rs 100 per litre
In Mumbai, petrol price is just Rs 4 per litre short (Rs 95.75 a litre) touching the three-digit mark of Rs 100 per litre for the very first ever anywhere in the country. Diesel prices in the city are closing on Rs 90 a litre (Rs 86.72 a litre).
Petrol in Delhi has now crossed Rs 89 per litre, which is the most expensive so far.
The most expensive rate of diesel in Delhi was the last week of July in 2020 when the price was Rs 81.94 per litre and petrol rate was Rs 80.43 per litre.
Oil marketing companies raised the pump price of diesel by a high level of 35 paise per litre and petrol by another 30 paise per litre in Delhi.
Across the country as well the petrol prices increase ranged from 26-32 paise per litre and diesel price 30-35 paise per litre depending on the level of local taxes on the two petroleum products.
In the last seven days, the price has gone up by Rs 2.36 per litre for petrol while the diesel rate has risen by Rs 2.91 a litre.
In all other metros, petrol is over Rs 90 a litre mark while diesel is well over Rs 80 a litre barring Delhi.
The increase has followed the firming global oil prices (both product and crude) that have maintained a record streak of gains in past few days with crude reaching over $ 63.5 a barrel mark (single day gain over 2 per cent).
Social media is buzzed with critics of Modi led government condemning the steep rise in Petrol
Petrol prices in 4 metro cities
Delhi: Rs 89.29
Mumbai: Rs 95.75
Kolkata: Rs 90.54
Chennai: Rs 91.47 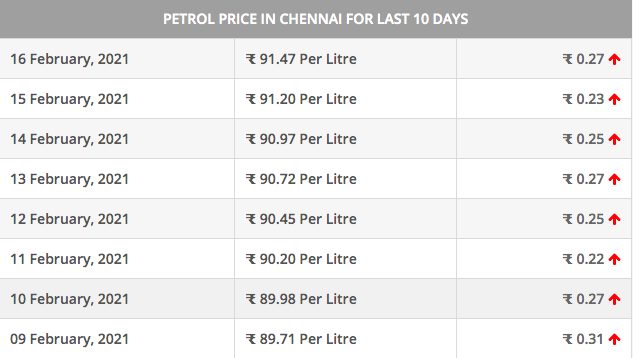 Diesel price in 4 metro cities
Delhi: Rs 79.70
Mumbai: Rs 86.72
Kolkata: Rs 83.29
Chennai: Rs 84.77
The petrol and diesel prices have increased 20 times in 2021 with the two auto fuels increasing by Rs 5.58 and Rs 5.83 per litre respectively so far this year.
The last few increases in pump prices in petrol and diesel has taken its price to record levels across the country in all major metro cities and other towns.
The last time the retail price of auto fuels were closer to current levels was on October 4, 2018, when crude prices had shot up to $ 80 a barrel.

According to Johns Hopkins Coronavirus Resource Center, the US has reported nearly 1.9 million cases and over 1,09,000 deaths while the total number of coronavirus cases in India and China stand at 2,36,184 and 84,177 respectively. Trump, in his remarks at Puritan Medical Products in Maine, said that the US has carried out 20 million Read More…

Acting upon a definite information, a special team of Solapur City Crime Branch of Maharashtra Police had raided a house in Kalaburagi last Sunday and arrested two persons   Also Police recovered four laptops, over a dozen mobile phones and a vehicle valued at Rs 38 lakh after it busted an IPL cricket betting racket. Read More…

Antigen devices return results in about 15 minutes compared with several hours for the reverse transcription polymerase chain reaction (RT-PCR) method, a laboratory-based process which the U.S. Centers for Disease Control and Prevention calls the “gold standard here” for COVID-19 detection.   Antigen tests typically detect the virus around 80% to 90% of the time, Read More…