Skip to content
Share via
Pandemonium prevailed when Rajya Sabha has passed the Essential Commodities (Amendment) Bill, 2020, the Farmers’ Produce Trade and Commerce (Promotion and Facilitation) Bill, 2020 and the Farmers (Empowerment and Protection) Agreement of Price Assurance and Farm Services Bill, 2020.
Opposing the oral vote Member of opposition tored Parliament code book and threw at chair direction .Later Speaker suspended 8 MPs . This agitated the 18 Party opposition and they decide to stay away from parliament in a mark of protest
In the mean while Farmers in Punjab began their three-day ‘rail roko’ agitation to protest against the three farm bills
Sensing the danger the Ferozepur Railway division suspended the operation of special trains due to the stir
Railway authorities said 14 pairs of special trains will remain suspended from September 24 till 26.
[splco_spacer]
[splco_spacer]
The decision has been taken keeping in mind the safety of passengers and protection of railway property from any damage, officials said.
Among the trains which will remain suspended are
Golden Temple Mail (Amritsar-Mumbai Central),
Jan Shatabdi Express (Haridwar-Amritsar),
New Delhi-Jammu Tawi,
Karambhoomi (Amritsar-New Jalpaiguri),
Sachkhand Express (Nanded-Amritsar) and
Shaheed Express (Amritsar-Jaynagar), officials said.
Due to record hike of corona in India that become the top most country in the globe At present, routine passenger train service remains suspended because of the COVID-19 pandemic.
[splco_spacer] 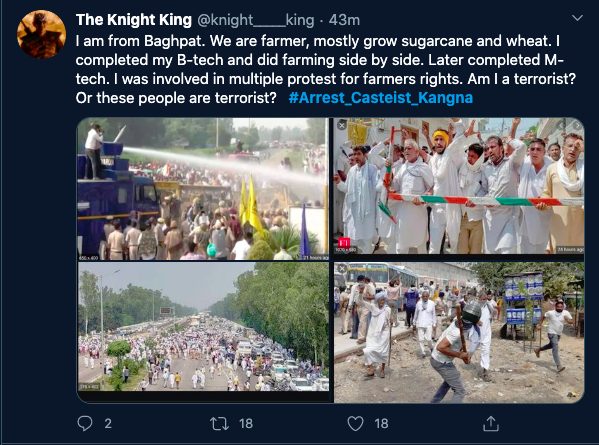 [splco_spacer]
The call for ‘rail roko’ agitation was given by the Kisan Mazdoor Sangharsh Committee and later, different farmers’ outfits also extended their support.
Farmers under the banner of Kisan Mazdoor Sangharsh Committee have decided to squat on rail tracks near Devidaspur village in Amritsar and Basti Tanka wala in Ferozepur. As a result Activists of Bhartiya Kisan Union (Ekta Ugrahan) squatted on rail tracks in Barnala and Sangrur on Thursday morning onwards .
The representatives of the committee said they were getting support from several sections including government employees and labourers.
Kisan Mazdoor Sangharsh Committee president Satnam Singh Pannu said that they have appealed to representatives of political parties, ministers, MPs and MLAs not to take part in the farmers’ agitation.
They vowed to gherao BJP leaders and socially boycott those who voted in favour of the farm bills.
As many as 31 farmers’ outfits have given a call for the complete shutdown of Punjab on September 25 to protest against the bills.
Farmers in Punjab have expressed apprehension that the bills would pave way for dismantling the minimum support price system, leaving them at the mercy of big corporates.

Share via The Rafale deal issue rocked the Lok Sabha Friday, with Defence Minister Nirmala Sitharaman dismissing the media report on the deal as “flogging a dead horse” and slamming the opposition for playing into the hands of vested interests.   Amid the opposition uproar over the Rafale matter, Sitharaman made a suo motu statement Read More…

Share via India had overtaken the UK in 2019 to become the fifth-largest economy in the world but has been relegated to the sixth spot in 2020.  “India has been knocked off course as a result, after overtaking the UK in 2019, the UK overtakes India again in this year’s forecasts and stays ahead till Read More…

Share via Aam Aadmi Party (AAP) leader Sanjay Singh on Sunday thrashed BJP led modi centre government, accusing it of taking a loan of Rs 5,700 crore from China and on one other hand and on other hand asking people to boycott the neighbouring country   “The drama of BJP is praiseworthy. You tell the Read More…