Skip to content
The Samkyukta Kisan Morcha (SKM) has called for the bandh from 6 am to 6 pm on Friday 26 March to mark four months of the farmers’ agitation at Delhi’s three borders Singhu, Ghazipur and Tikri.
In pursuance railway spokesperson said four Shatabdi trains have been cancelled and 31 other trains detained due to the protests.
The 32 locations where train movement has been disrputed fall under the Delhi, Ambala and Ferozepur divisions of the railways.
”As of 9 am kisan agitators are sitting at 32 locations. Total 31 trains have been detained so far. Four Shatabdi trains have been cancelled,” Northern Railways spokesperson Deepak Kumar said.
Thousands of farmers, mainly from Punjab, Haryana and western Uttar Pradesh, have been camping at Singhu, Tikri and Ghazipur borders demanding a complete repeal of the three farm laws and a legal guarantee for minimum support price on their crops. 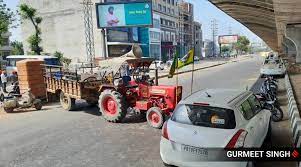 In a tweet in Hindi, Oppostion party Congress leader and MP Gandhi said India’s history shows that
‘satyagraha’ ends atrocities, injustice, and arrogance. The movement should be in national interest and peaceful, the former Congress chief added.
More than lakhs farmers have been camping at Delhi’s border points at Ghazipur, Singhu, and Tikri since November last year demanding that the Centre repeal the three contentious farm laws and in the agitation process more than 400 farmers so far died
The protesting farmers have expressed apprehension that the new laws would pave the way for eliminating the safety cushion of the Minimum Support Price (MSP) and do away with the ”mandi” (wholesale market) system, leaving them at the mercy of big corporates.
Indian Prime Minister modi refused to meet farmer association as on date and on the day of Bharat bandh called by farmers he left for Bangladesh

Twitter India officials came to meet the panel. It was lead by Twitter India chief Mahima Kaul. However, the Parliamentary panel which is looking at the alleged bias shown by the social media platform refused to meet any of the Indian officials.   The panel lead by BJP MP Anurag Thakur is looking to interview Read More…

India’s real gross domestic product in Financial Year 2020-21 could contract 5.3 per cent, said India Ratings and Research on Wednesday   “This will be the lowest GDP growth in Indian history and the sixth instance of economic contraction, others being in FY58, FY66, FY67, FY73 and FY80,” said the ratings agency in a press Read More…

Nirmla Sitaraman on Thursday had said the economy has been hit by the pandemic, which is an ‘Act of God’, and it will see a contraction in the current fiscal.   Taking a swipe at Sitharaman over the remarks, Former Finance Minsiter and Congress Senior leader P.Chidambaram said, “If the pandemic is an ‘Act of Read More…